I paddled this section with John Warner on the 21st of May.  We were hoping to run the upper-most section but were unable to reach it due to a locked gate some 7 miles up the road.  On the way back down the road we found a forest service road that seemed to be heading in the right direction.  Following this road to the end, we arrived at a sweet campsite on the rim of the Middle Eel's final gorge.  We had time before the sunset, and spent it exploring a potential route to access the river.  Lucky for us there was a fairly well established trail (probably due to some forest service study) that was marked with flagging to discern it from the many game trails.  By following the flags we were able to access the huge grassy field visible from our camp that provided a great river access.  Here is the river as seen from camp 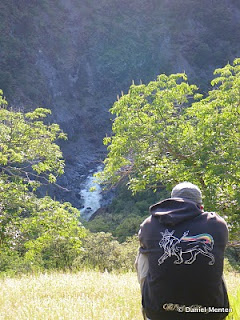 Base Camp was at the sunny ridge on the left side of this shot.

The next morning, Warner elected to run the bike shuttle.  I rolled over in my sleeping bag because it was chilly out, and before I knew it he returned.  After making coffee, we stashed our stuff in the woods and started hiking for the river. 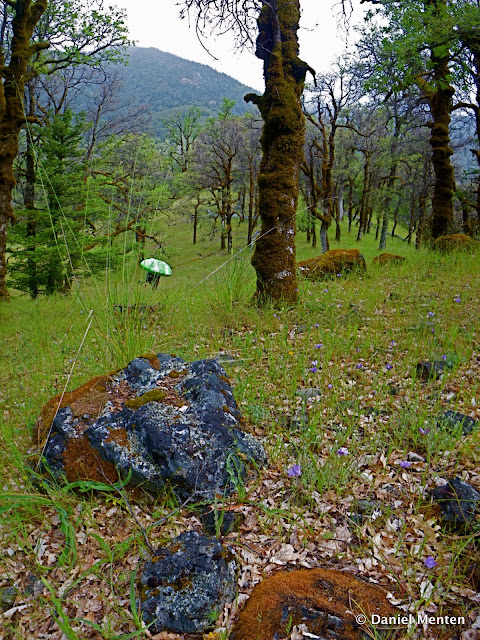 There were thousands of caterpillars everywhere, on every tree, plant, rock or other inanimate object. 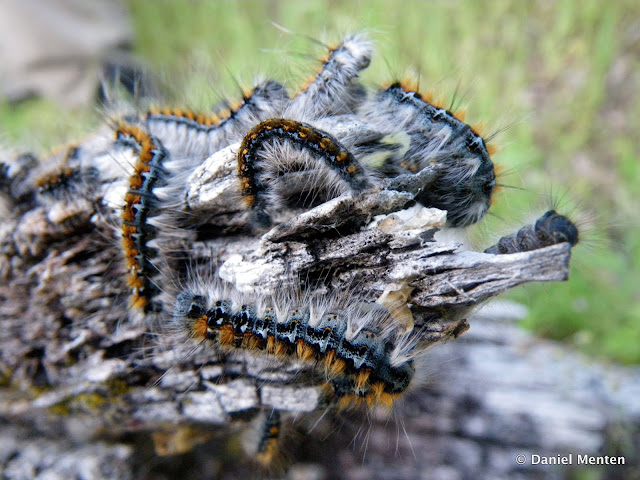 Warner enjoys a moment on the hike in. 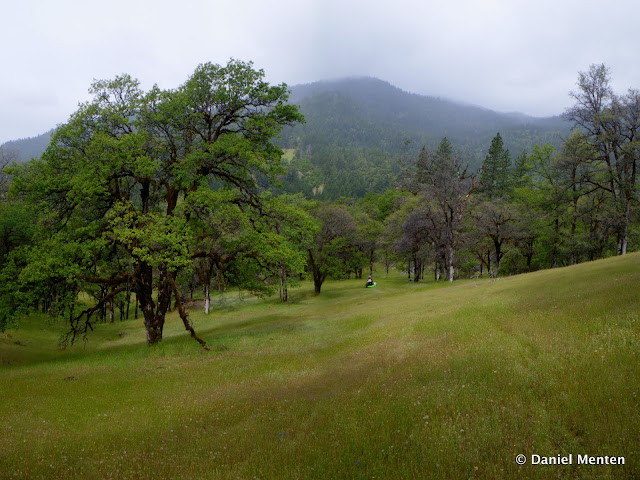 Here is the view looking upriver at a great rapid marking the end of the upstream classic run. 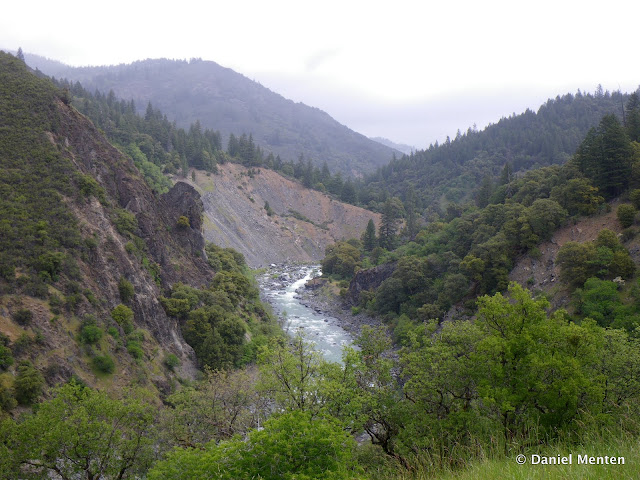 After descending one more grassy hillside to the river, we put on an estimated 1,500 cfs.  The flow was powerful and the river is fairly steep (80 fpm) combining to make boat scouting a little difficult.  The river channel was huge however, evidence of massive wintertime flooding.  Here is John Warner coming around the first corner. 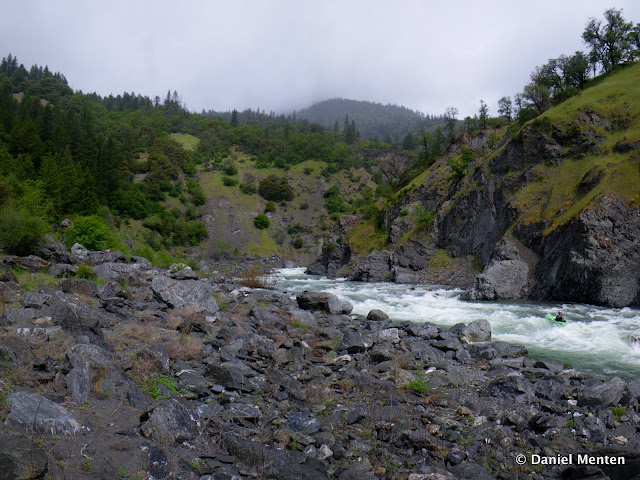 Everything went with the flow, making for a great class III-IV run as we dropped into the gorge. 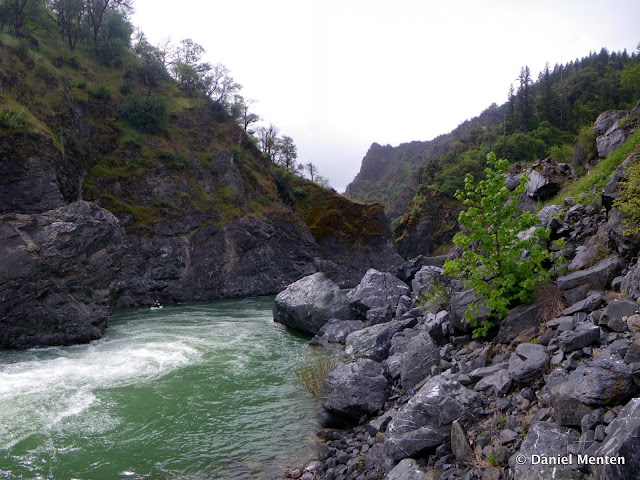 Just downstream was a fun boof down the right side, and then we arrived a the rapid visible from camp.  This drop turned out to be much smaller than anticipated with a line just right of the middle. 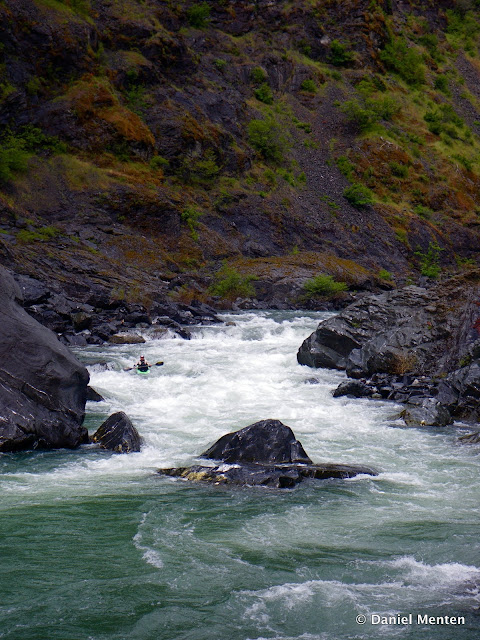 The river was amazingly clean and filled in at the level we had (2,000 @ Dos Rios).  We finally arrived at a portage drop where the river enters huge boulders, this is visible from the shuttle road high above.  The portage we did on the left was short, but slippery and over boulders.  We seal-launched directly into the rapid and paddled a slot to the right (as the left went into a sieve).  This would probably clean up at higher flows. 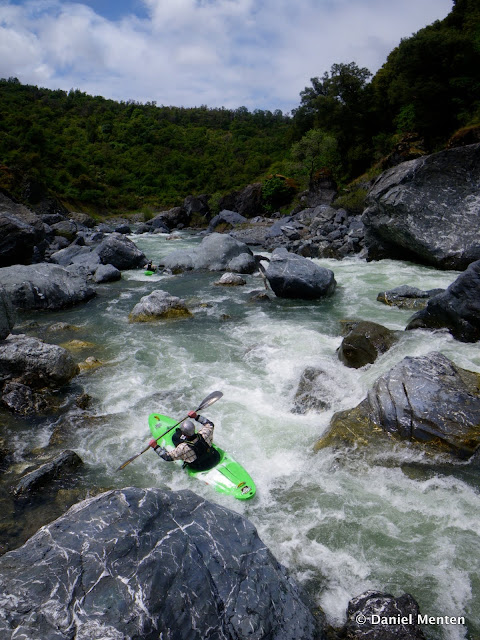 One more fun rapid is just downstream, we ran it down the right side. 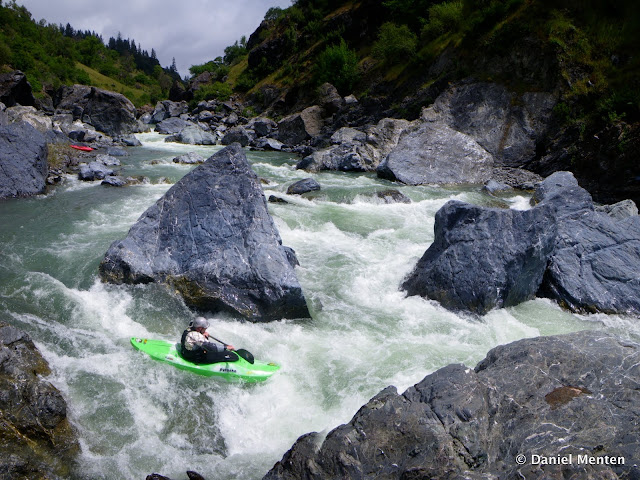 In all, this run is fun and unique with great scenery and whitewater.  Our campsite was excellent, and the hike in was quite nice with great scenery.  This run is definitely worth doing on an evening prior to a lower Middle Eel trip, or if you run into a locked gate while heading to the upper run.  To reach the run, drive to the confluence of the Black Butte River and Middle Eel, either by heading across Mendocino pass in the springtime (from the east), or 15 miles from Covelo on the Highway 162.  Be sure and make the right turn after Covelo, or you will wind up in Zenia!  We took out on the right bank downstream from the bridge.  To reach put-in, turn left at the Black Butte store, following the sign to Indian Dick.  The unmarked forest service road to put-in was about 3 miles upstream while you are going uphill, and takes off as a "Y" on the left side.  This comes after several private residences, so if you take the wrong turn, be respectful.  Just down the road, stay left at another "Y" and follow it to the end.  This may be difficult for a low-clearance vehicle, but it's not that far anyways.  Hope everyone's enjoying a good spring...Have fun! 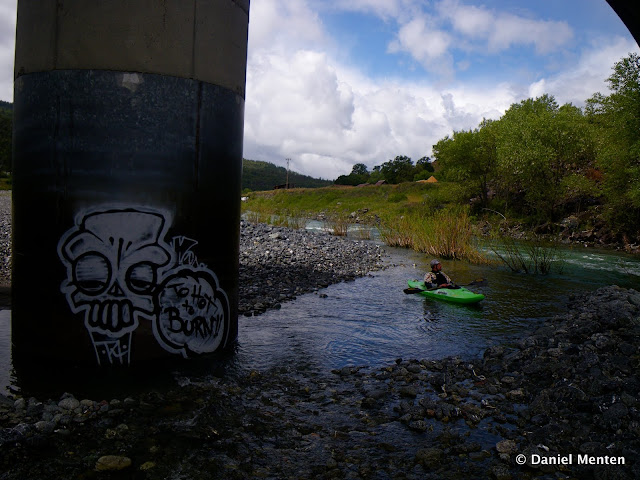