Van Duzen River—The Bloody Run
Paul's Helmet Cam Video
http://www.exploresixrivers.com/
First descents have a range of shapes and forms.  There are the hidden gems, the ones that never flow, streams on private property, some first descents are simply too remote and require creativity or miles of hiking to access.  Some first descents with access are simply avoided because of the known difficulty they present.  Then there are the first descents that have been attempted, unsuccessfully.  These streams fall into a different mindset among the paddling community, tried but not completed.  The river has already been tainted by the scraped off plastic of paddlers before you while lingering stories of pins, swims and hike-outs in the dark reinforce the brooding nature of the run.  The latter two describe the Bloody Run.

The Van Duzen River is one of the Six Rivers flowing across the Six Rivers National Forest of Northern California.  The Duzen’s legacy began early when explorers through the area found the going extremely difficult.  The river was named after a member of the Josiah Gregg party of 1850.  The namesake drainage, Bloody Run, flows into the Duzen near mile 15.  As with most other “Bloody” placenames, Bloody Run is tarnished with the legacy of Native American slaughter in the area.  With easy access to put-in and take-out, however, it is a wonder that the Bloody Run hasn’t been paddled.  It has, however, been attempted.  A previous mission involving the formative Ben Stookesberry and Adam “Chowdy” resulted in the aforementioned pins and hike out in the dark.

Kayakers in the area have known the Van Duzen to have unfavorably dynamic geology that produces many landslides.  A short drive upstream from the classic class III Grizzly Creek section reveals Goat Rock Falls, a notoriously rugged rapid decorated with house rocks, strange hydraulics, wood and sieves galore.  This rapid is a sight to behold at higher flows up to 20,000 cfs, when it becomes a hideous and awe-inspiring cataract of watery explosions.    My imagination painted a picture of the Bloody Run as 15 miles of Goat Rock, and I never felt a need to put myself through enduring the many hardships of portaging and scouting that this might entail.  Enter Paul Gamache and the Six Rivers Source to Sea Mission.
With a need to paddle all Six Rivers now in play, we set our sights at the Bloody Run as the first mission to be done.  Partially it was a lack of water in the area, since 2012 has been among the driest California seasons in memory.  Fortunately the optimal level we wanted for the bloody run was relatively low, 1,000 cfs, at which the Duzen flows commonly.  The rain finally came and brought the rivers up allowing Paul and I to decide on a mission to keep us away from our Valentines; Grand Canyon of the Mad, or the Bloody Run.  In hopes we’d be able to accomplish the mission in one day we elected for the Bloody Run, knowing the Mad would be a mandatory two-day.  Our need for a third member of the party led to a call and soon Arcata up and comer Wes Shrecongost was onboard.  With the crew arranged, we planned for a long one day, but decided to pack for an overnighter, just in case.  After a pre-dawn start we headed up Highway 36 to a beautiful Valentines Day sunrise.  Climbing up the twisty road the scenery shifted to snowy hillsides as the previous storm had obviously been a cold one.
Finally arriving to our put-in at Dinsmore, 2,600 feet elevation, we gathered our gear quickly and put-on the river with a reasonable 9:00 departure.  “I think I’m going to leave my stove”, said Wes, in an effort to pack light.  “I’ll carry it” I quickly replied.  With a nervous anticipation we carried our boats down to the river and put on.
Less than a half-mile into the run, we arrived at our first portage “Here we go”.  This one wasn’t too bad, but shortly downstream we arrived at another massive boulder pile, portage #2.  This one was longer and we began to get a feel for the difficulty of portaging in a landscape totally absent of flat, even ground and stable footing.  Portaging through a backwater, Paul realized his relief zipper was undone when cold water spilled into his drysuit.  He cursed himself for the mistake but carried on unabashedly. 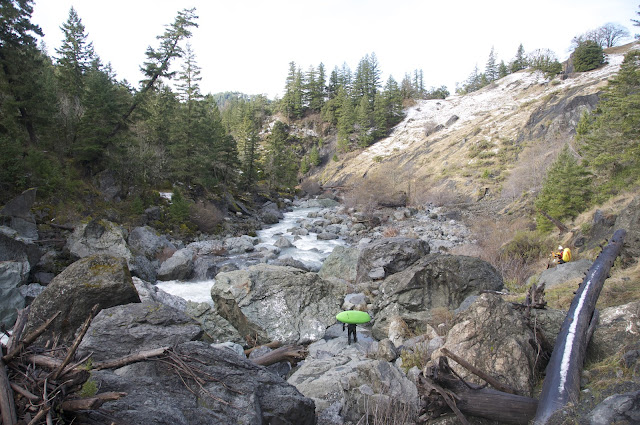 I had a little beta from my friend Chowdy soloed these first couple of miles in 2004 and told me about a major falls.  Before long we reached it.  The river dropped through a hideous gorge with major rock fall before continuing downstream.
We decided the best portage route was the left side and began our longest carry of the entire trip.  After climbing to a mossy precipice, we spotted some Madrone trees along the edge of the canyon that appeared to be on the best route.  I quickly realized that avoiding Poison Oak to get there wouldn’t be an option.  We humbly put our heads down and started charging through the vile plants.  After returning to river level, we paddled a sweet drop before arriving at another portage.  This would be the theme of our trip: run a rapid, then portage the next.
Downstream a bridge crossed the river as it let up momentarily allowing us to soak in the scenery, the surrounding hills were laced with snow and sun was peeking out.
We quickly entered another gorge where a sweet entrance boof brought us to a mandatory portage over a rock within a gorge-clogged-by-the-rock.
Tricky Teamwork Portaging
Paddling away from here we arrived at the confluence with the South Fork, or Little Van Duzen, depending on which map you check.  This adds some much-needed flow and immediately the river takes on a larger and more open character, it is still stuffed with enormous boulders, however.  After a hopeful half-mile of nice paddling we arrived at another gradient section.

This one was a maze, the river dropped away into a boggling boulder garden so tight you could hardly see the water flowing between the rocks.  We elected to portage the high line; around the cliff on the right and up to a grassy hillside that looked like easier going than the river level rocky route.  This unfortunately was not a good decision, as we found ourselves looking far down the hillside at a couple of sweet rapids that we were now portaging.
And now we had to find a way back down to the river.  Being that it was after noon, we took a quick break in the sun and chewed on some energy bars.  Paul checked the GPS and informed us of our status, “It appears we’ve gone 5 miles”.  Knowing we were hoping to cover at least 15 miles, it began to set in that we were probably on a 2-day descent at this point and I elected to save my burrito for later.
After lowering our boats down a landslide we reached the river and immediately had to portage again.  I found a sneaky route between a crack in two boulders and put-on, heading down to scout the next drop.  Paul and Wes however were unable to find a way to the river here and nowhere to be seen.  After scouting the rapid and looking around for the boys I started to feel a little lonely and wound up running a couple of more drops downstream to where I assumed they were.  Eddying out above another portage rapid I was relieved to see my crew finishing their long portage down the right.

We were able to charge downstream through some fun rapids and I got out to take a look where the river gorged up again.  Climbing up to the edge of the gorge I looked straight down into another sieved-out mess, this one with even bigger boulders!
Signaling it was a portage to the boys, we began working our way downstream through massive boulders on the right.
Eventually we reached an overhanging area where we seal-launched into the outflow of a sieve exiting via. a sweet boof through a sticky hole. 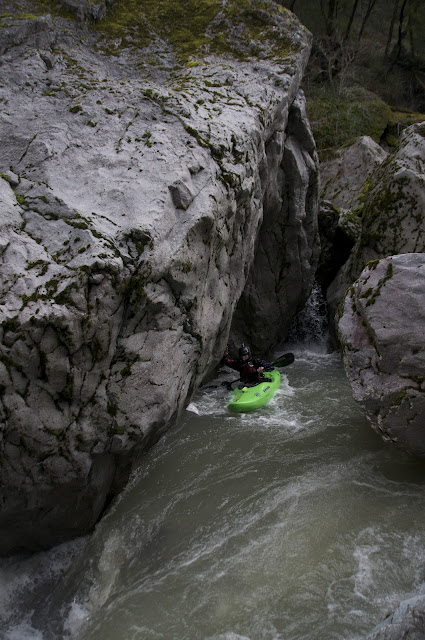 Here is Wes in the Armpit Drop 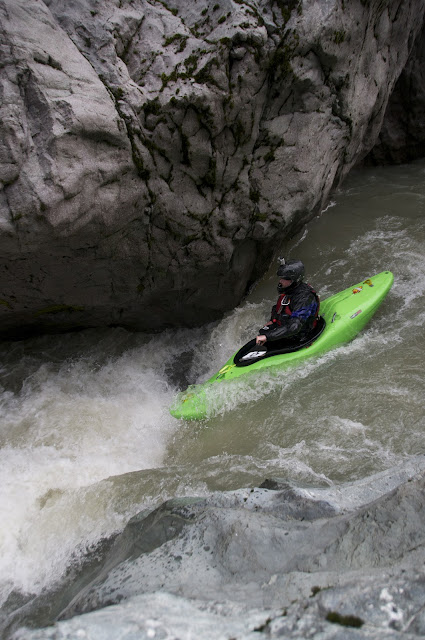 Paul charges through the armpit 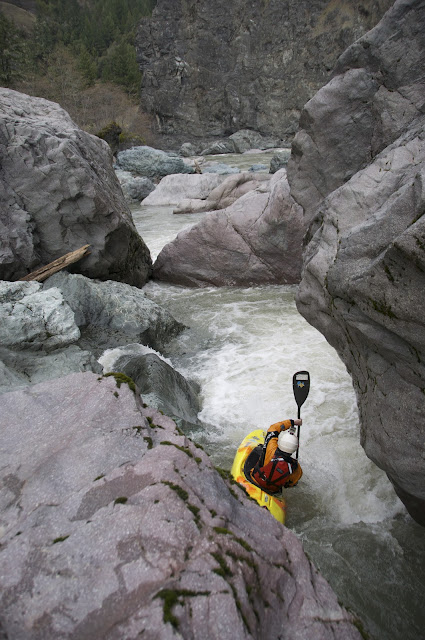 The river then flowed placidly to the next pile of rocks requiring a portage downstream.


We reached a terrific section of river and covered an easy mile before giant boulders reappeared forcing us out of our boats again.  It felt like the river was teasing us, trying to make us think we’d make it out in a day when we really had no chance.

Yes, the river flows beneath that boulder too.
It eventually became accident hour as the grueling portages and mental challenges were adding up causing the crew to begin making mistakes.  Sloppy lines, mini-pins and slipping while portaging combined with the falling darkness urging us to start looking for a camp spot.  After inspecting one substandard site, we paddled one final rapid before reaching a road on the right bank.


There was an enormous flat with some oak trees and we quickly began gathering driftwood to build a fire for warmth, our number one priority.  A chilling fog had rolled up the canyon and it began raining lightly, “the weather was supposed to be sunny”, but the Humboldt Fog had done it again.


High fives all around as we were safely together, Paul sent out the “All Good” message on the SPOT device and we checked our location on the GPS…9 miles of progress, not bad, we’d made it well over halfway and looked forward to a mellower second day on the water with less gradient.  Our fire began to roll as we started drying off our fleece layers, cooking up some food and rehashing our days adventure.  The stars came out and a biting wind caused drops of water to fall from the trees, but the fire raged on and we turned in for the night.
Posted by Daniel Menten at 12:19 PM