After a long hiatus from the blog a recent trip down Burnt Ranch Gorge that became a very special occasion sparked my urge to share along with some general beta about the run as well.  I was hanging out at Uncle Tom's Cabin doing my usual routine of waking up, coffee, brush clearing, watering the garden and whispering to my tomatoes to "please turn red".  The sound of tires rolling down the dirt driveway perked my attention as Teague rolled up rocking a fancy purple Pirouette S atop his car.  "Are you gettin' ready for the race" I asked him, "Nope" was the reply "just trying her out".
I was expecting to paddle with Russell Kramer and his father John, who were planning on rafting the Ranch so my next question of course was "how long till those boys show up".  Before we knew it they'd arrived and we were blessed to meet the storied Kramer family parents.  A plan was hatched to meet them at Cedar Flat and knowing they had a raft to rig, and how slow rafters can be, we lagged a bit before leaving the cabin ourselves.  Justin finished outfitting his Pirouette S and we loaded our gear into my truck when our friend Jon came rolling down the driveway with perfect timing.  Jon threw his boating gear in and saw the longboat sticking from the back of my truck.  I told him it was Teague's and he turned to Justin, "You gettin' ready for the race?" 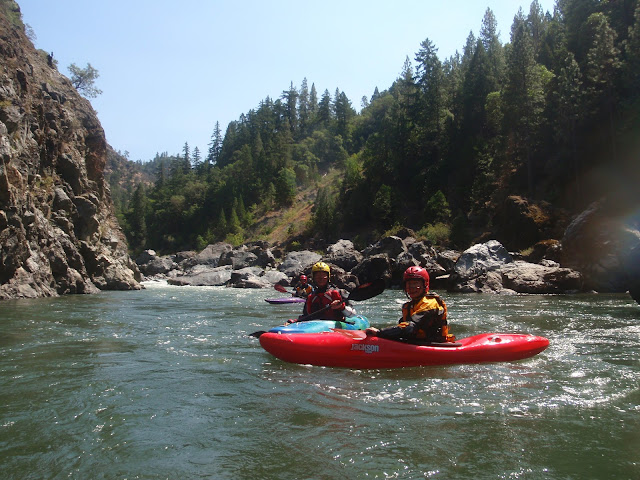 Jon had been contacted by "two Japanese paddlers" who were looking to hook up with some local boaters who knew the lines so we drove down to Grey's Falls to meet up.  As we pulled in I saw a teenager and it became clear that we would be paddling with another Father/Son combination today.  We met Masa and his son, told them shuttle was already set and that we'd see em at Cedar Flat.  When we arrived there 10 minutes later, I saw the Kramer rig departing and figured we'd catch up to the raft in no time.  The Japanese duo were paddling well and we floated downstream on a beautiful summer day, the first of September, figuring we would catch the rafters shortly.  Passing the dump, our normal kayaker put-in, a playwave that has been in since they began the release was washed out and it dawned on me that they had let more flow from the dam again. 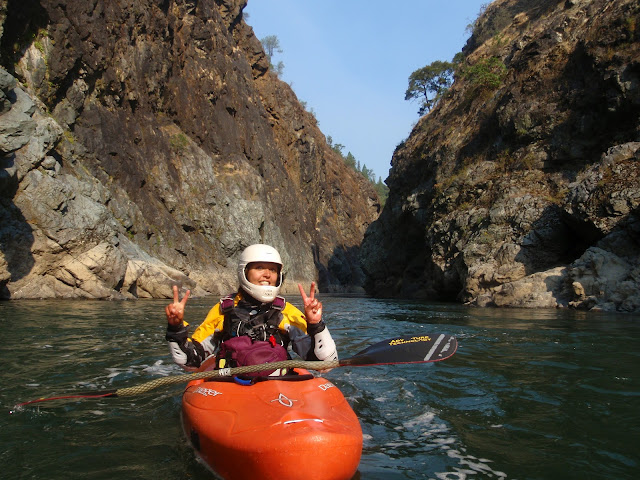 What release am I talking about?  The details have been sketchy and generally unavailable, but with a stroke of fortune (and perhaps legal discussions) the Bureau of Reclamation decided to release flows from Trinity Dam hoping to avoid a tragic repeat of the Fish Kill of 2002.  The impetus for making this decision is that fisheries scientists are predicting the largest Salmon return in recent history.  One week prior to the beginning of this water release, which began on August 15th a heatwave brought water temperatures up to unusually high and conditions were getting ripe for another fish-kill scenario--the release couldn't have come at a better time for fish, or kayakers.
The duration of this release is under question right now, originally the end date was supposed to be September first.  Recently however, I've heard rumors of the 1,000 cfs release to continue until the 23rd of Sept!  To top that off it was also rumored that the dam operators would be spiking the river up to 1,800 on the 13th, simulating a natural flow spike.  All of these thoughts crossed my mind as I passed the washed out wave and smiled big.

If you aren't familiar with Burnt Ranch, 1,000 cfs is a pretty ideal flow.  The rapids tend to be more forgiving with enough water for rafts.  But it was higher than that.  Speaking of rafts, where was the Kramer combo?  Our crew rolled into the Pearly Gates stoked and left even happier, everyone passing the test. 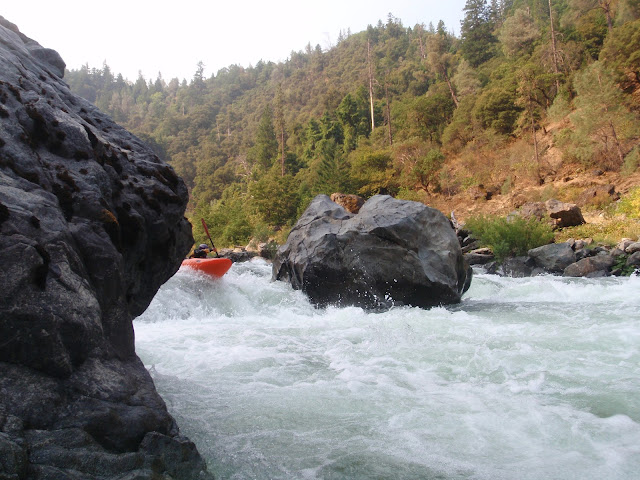 Next we arrived at Meteor Rock, where awesome lines exist to both sides of a round rock, with a meteorite-looking undercut just downstream in the middle.  It's hard to decide which line to take sometimes because they are both so good!  Downstream comes Son of Scraper and shortly thereafter the infamous Toilet Bowl...here is a photo of my old man boofing it back in the day. 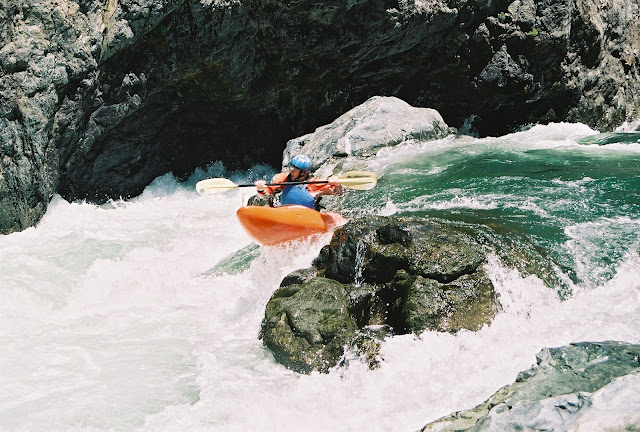 Everybody's favorite rapid follows, run center, and then after a longer pool you reach hole-in-the-wall, which is also run center.  An even longer pool follows to allow for reflection of how your paddling is going that day because the most difficult section is approaching. 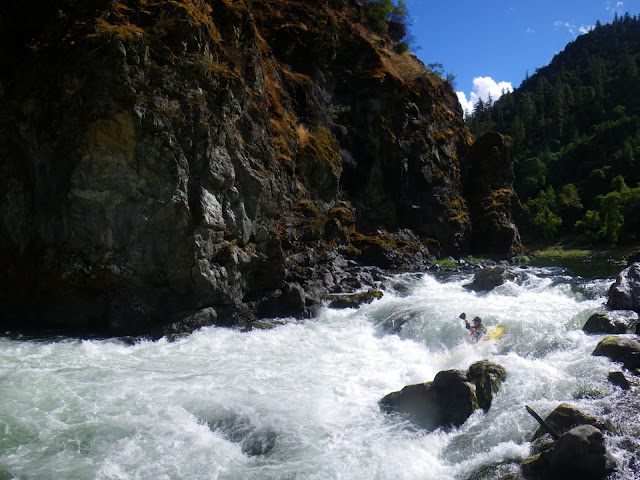 Guilt Complex starts off the 100 foot per mile Burnt Ranch Falls section.  It is also called double drop although there really are three drops:)  Then we were above the falls and wouldn't you know it there was a raft waiting for us!  Russell and John were happy to see the kayak-platforms they would be able to commandeer should their rafting endeavor become hapless.  We were happy to see some potential rafter carnage and took off in a flurry of paddlestrokes down the first falls.  Well, none of the three falls are really a true falls, more like big rapids with bedrock and monstrous boulders around.  It's a combination that produces dangerous sieves and pockets, limitless opportunities for carnage abound. 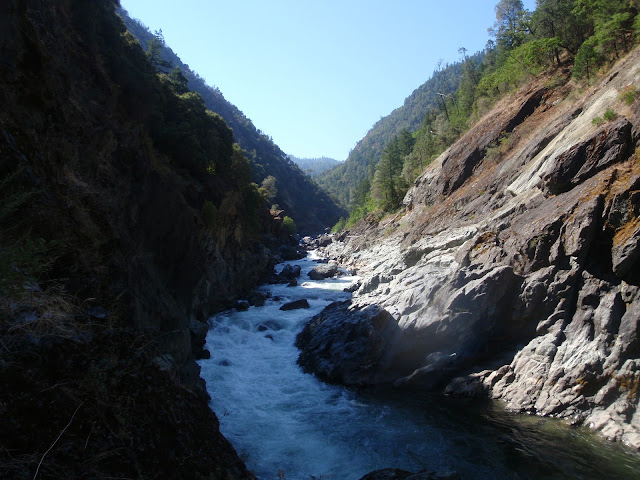 The first falls exemplifies this description as the right side of the main drop has become a gnarly man/boat eating sieve.  The Showerhead, which is the center slot, recently claimed my friends kayak for 2 weeks during a vertical pin/sieve extravaganza.  It took us a z-drag, pully's and climbing equipment as well as a team of 8 to retrieve it and left me feeling with an even spookier feeling about running that line.  At levels of less than 1,000 I don't recommend it.  To top it off, the main drop, Jaws, has had a log in it.  The log was cut in an effort to free it and it managed to somehow vertically pin in the runout of the drop.   All of this adds up to a classic northcoast rapid.  Masa rolls through the Jaws. 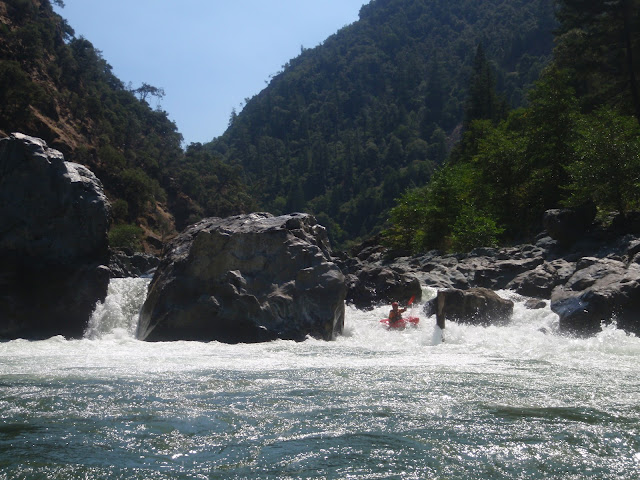 And the Kramers too 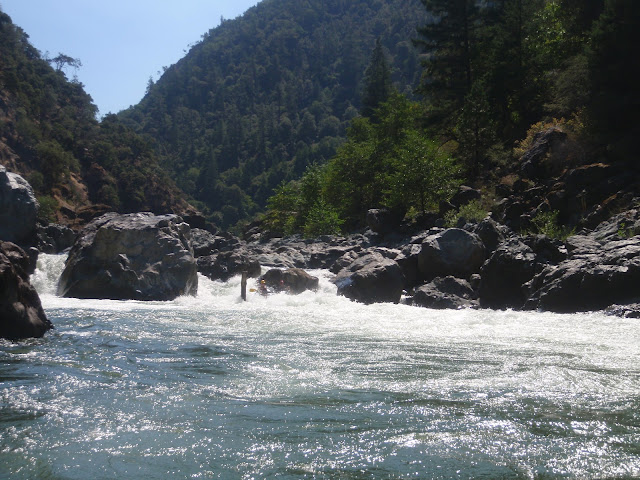 Everybody styled it and we proceeded to the next eddy above #2.  Second Falls is a big rapid that I consider the most difficult of the three falls at certain levels.  We encouraged the Oto's to get out and scout while we showed them the lines like proud locals.  Hyland boofs the center line. 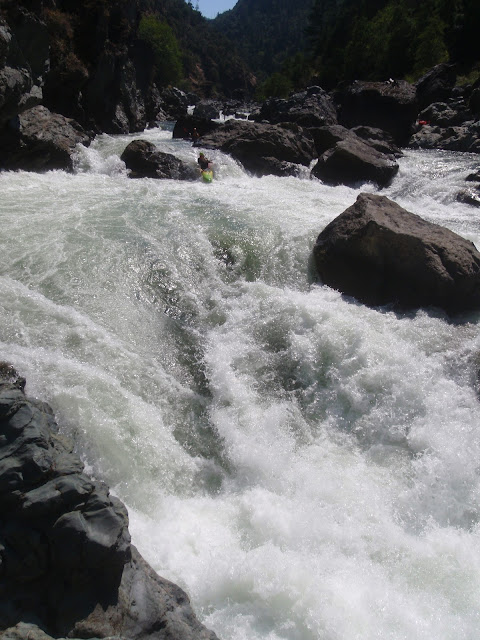 Teague showed us how they used to do it. 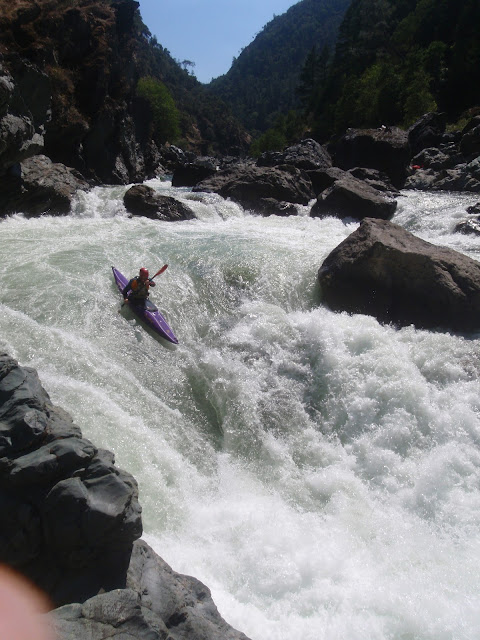 Then the Kramers stepped it up and styled their line because it runs through their blood. 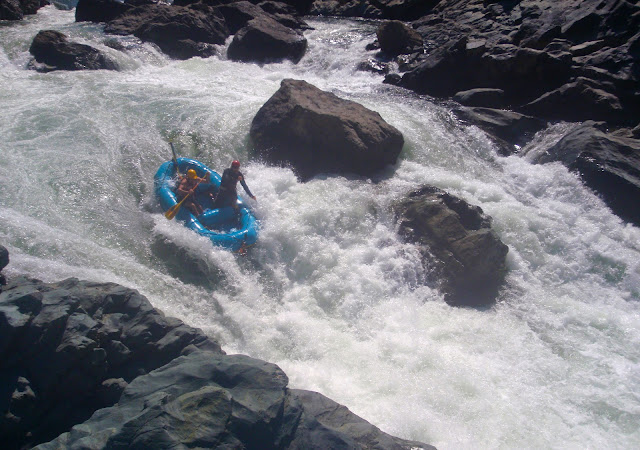 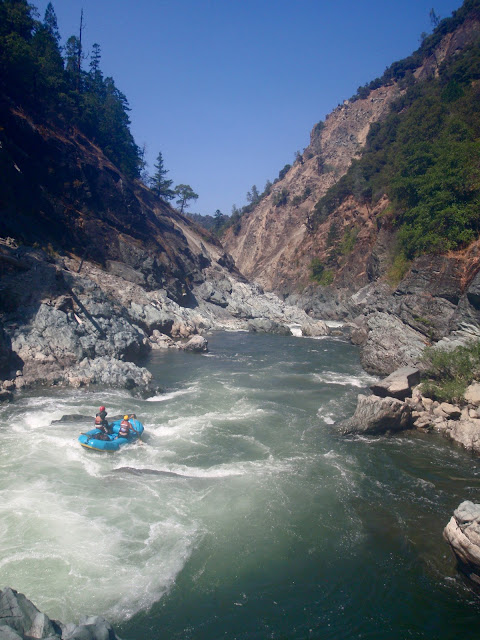 As Masa and Kenya approached the drop, Masa missed his move for the center slot and boofed into the right side entrance hole.  This resulted in a beat-down and I ran with my throwbag towards the hole.   He swam and flushed down the second part of the drop, mystery style, reappearing downstream of the safety kayakers.  Jon and Teague had already discussed their plan, "you take the swimmer, I'll get the boat".  Jon helped chase down and assist Masa to shore while Teague waited for the boat to finish doing rounds in the backed up hole.  It freed, plunged over the bottom drop and Teague peeled out in hot pursuit.

Kenya had been waiting in a midstream eddy this whole time, and I gave him a thumbs up.  He proceeded to style the line like he had been doing all day long.  When I paddled down to the crew, Masa was loading up into the raft and Kenya was in the eddy too but Jon and Teague were nowhere to be seen. They had chased the ghost boat into the third falls on a recovery mission.  I looked at Kenya and smiled "I bet your dad didn't think he would be going rafting today".  Then I led Kenya down #3, where he pulled off a clutch roll above the final drop and proved he was a fighter after rolling up again at the bottom with a big whoop!  Then came the Kramer/Oto combo. 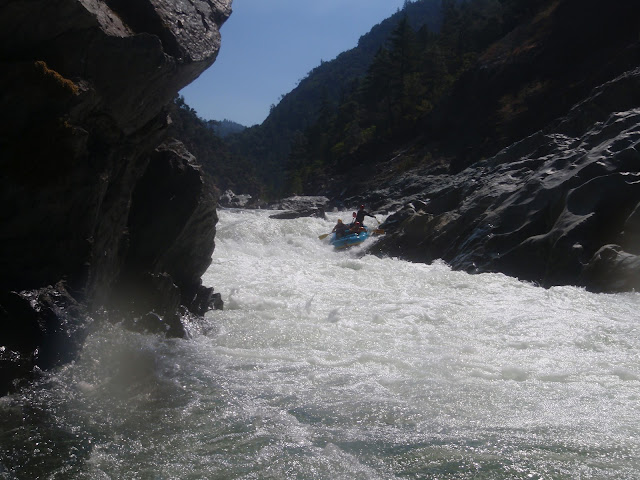 We took a quick break below the falls to reflect on the awesomeness of the gorge and the Kramer's continued on downstream.  During the discussion Teague talked about how he had "gone off the final drop backwards and was getting worked in the hole as Jon came dropping in upon him."  to which Jon replied "I was looking at the pointy end of that longboat as I came down the drop bracing for my face".
Downstream of the falls is a big long pool before some of the best rapids of the river. 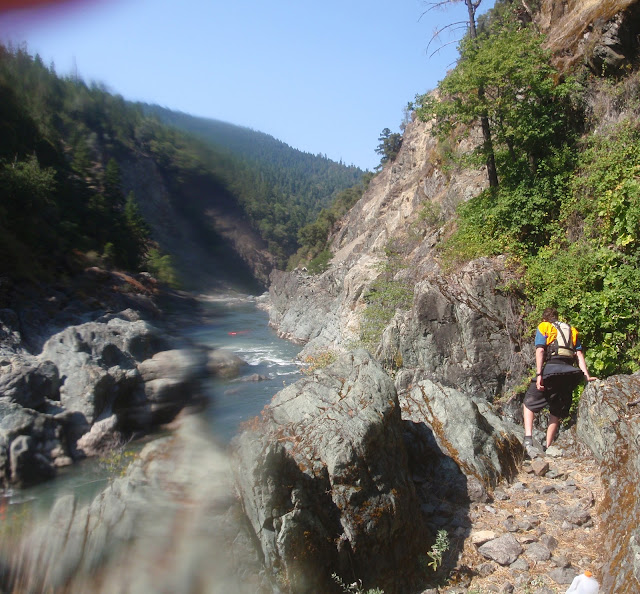 We continued downstream into Hennessy launching the center boof. 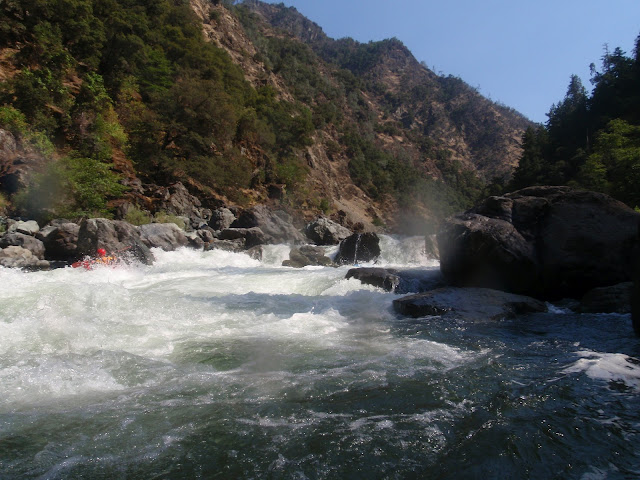 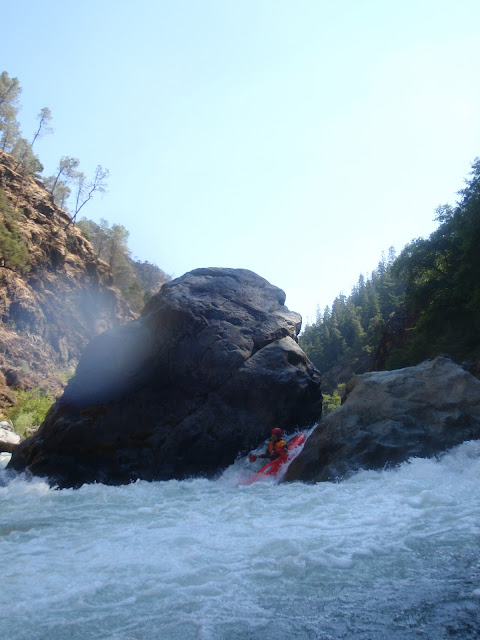 Above the New River confluence 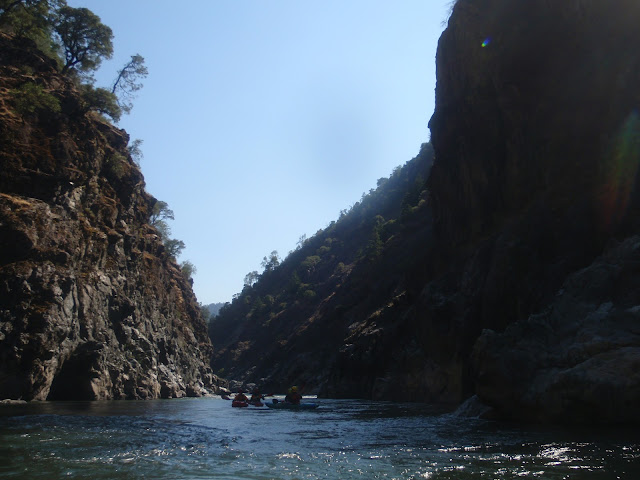 Table Rock is downstream where the river constricts to a raft-length wide.  Ride the tongue down the right but beware of the nasty nub sticking off the right wall, which has pin and elbow-crunching potential.  A fun mile of rapids, including my favorite Walrus Rock, bring you to the New River Rapid confluence.  This time of year the New River is usually warmer than the Trinity due to its sun-baked status and provides epic opportunities for snorkel-diving and exploring. 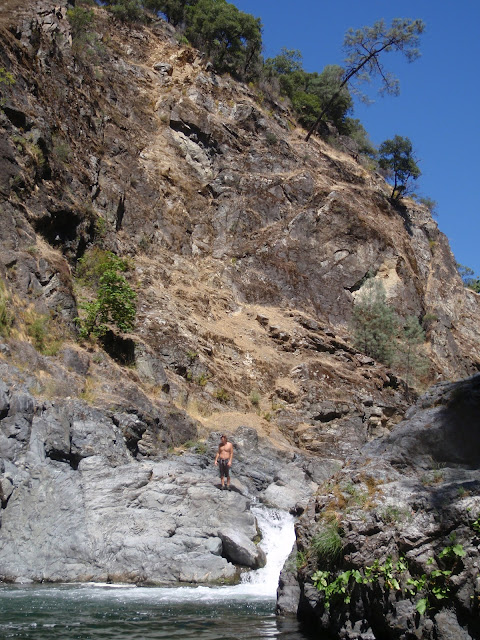 Greyhound rapid is next where you want to avoid a nasty cleft along the right wall.  Then another mile of easy water brings you to Grey's Falls. 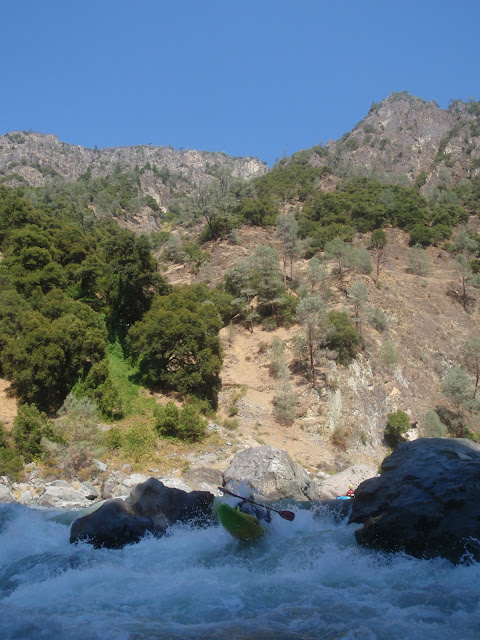 Grey's used to be sort of anticlimatic--I never saw any carnage and in fact, it was pretty hard to carnage out there.  That has all changed however thanks to the addition of a new log a couple years ago.  In defiance to the norm, this log has actually contributed to the rapid's improvement, making the plunge steeper, the turn tighter, and adding more potential for workage with a couple holes on the side and a rockpile on the right.  Kenya had, I think, his only bad line of the day, flipping in the seam that comes off the wall. 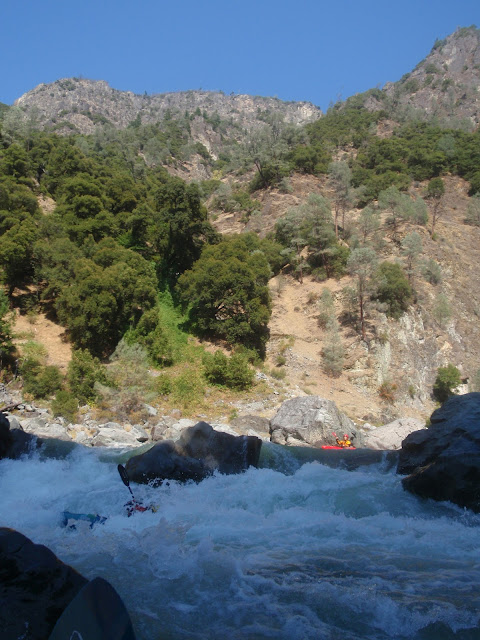 But we were all stoked.  The most remarkable achievement of the day, I think, is related to Burnt Ranch Gorges storied history.  The first descent of Burnt Ranch Gorge, in 1970, involved a father/son combination of Mel (dad) and Mike Schneller, who paddled with Dick Schwind at 350 cfs.  Tragically that run ended with Mel dying of a heart-attack at the take-out in Hawkins Bar, overwhelmed by the achievement.  To date however, this may be the first time that two father/son's paddled the Ranch together.  It was an awesome day enjoyed by all and reinforced the fact that Burnt Ranch Gorge is a whitewater splendor. 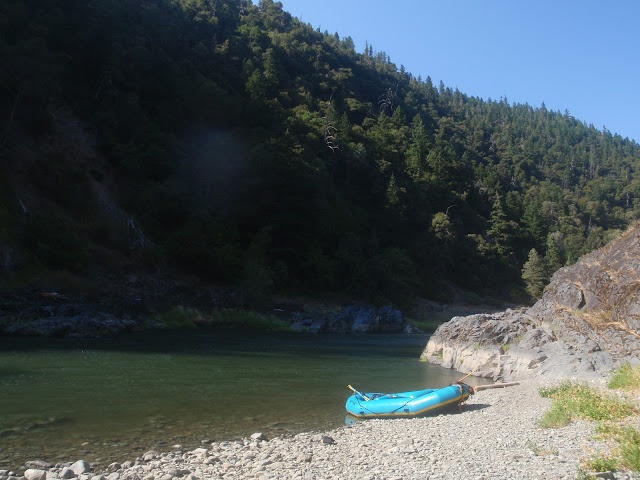 Posted by Daniel Menten at 9:54 AM