The South Trinity is probably one of the last runs on anybody's radar: a long shuttle to the middle of nowhere dims the motivation levels of interested paddlers.  After 10 years of living in Humboldt, I finally made it on this high-quality stretch of river with good friends Orion "O-Face " Meredith and Paul "Knoxville" Gamache.  This trip was made possible by two factors: 1) Orion's Dad was willing to drive us a shuttle and 2) Construction on Hyampom Road means that the Corral Bottom Road is being plowed this winter (2009-10; not usually plowed), shortening the shuttle drive immensely.  That morning Orion had to take the GWPE and as such we left Arcata at 10:00 A.M.  We met Orion's Dad in Willow Creek, and drove our vehicle to the low-water bridge, eventually hitting the 299 at noon, heading east.  2 1/2 hours of driving brought us to put-in at Big-Slide Campground. 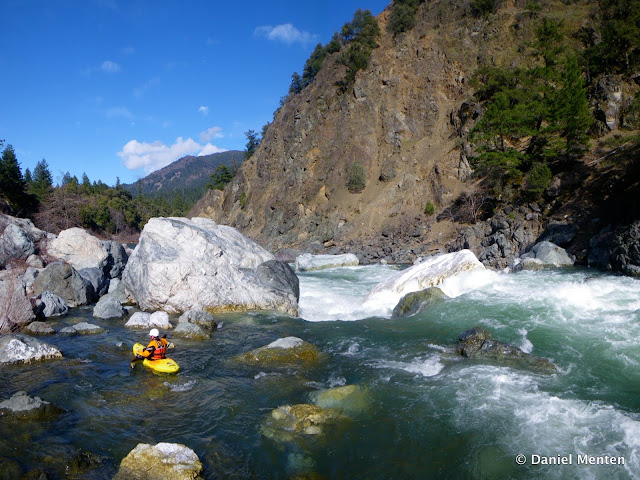 We eventually put on the water at 2:40 in the afternoon, a bit late for the 17 mile section, but we were counting on perfect flows (2,000 cfs @ Hyampom) to carry us along through the canyon.  Big Slide, one of the four major rapids, is right at put-in.  This is a long 3-part rapid that drops a significant amount of gradient and offers multiple routes.  We found the top part to be the sketchiest, a big rock jumble.  You immediately begin to notice how many big rocks are in this river while scouting/portaging.  Below Big Slide, the river continues to drop through smaller rapids before arriving at Big Undercut (EntrapmentFalls). 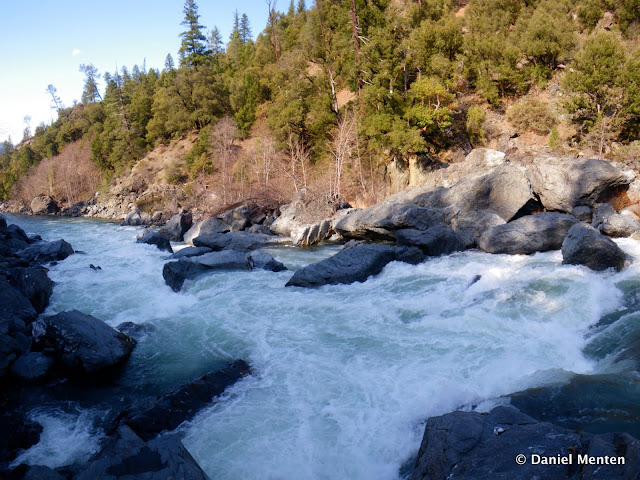 At our Flow this was definitely the scariest rapid; I looked at it for 5 seconds before portaging. The first two drops had massive holes and wicked currents looked like making the final move above the big undercut would be a tough go.  Several of the rocks on either bank looked dubious as well as a couple obvious sieves.  We were running late and opted for the quick portage on river left.  It wasn't bad with our kayaks, but a raft would be more difficult for sure as you walk over and around many large boulders.  We got back in and several more fun rapids continued.
In fact, I had expectations of this run being only 3 or 4 rapids, but actually there are many fun and exciting drops laced throughout the entire section, with several playspots too--maybe next time I'll bring the playboat and get an earlier start?  However, when you approach the obvious powerlines and a class 2 rapid with a disappearing horizon line, look for an eddy on river right.  Powerline Falls is ahead.  We eddied on the left and were able to get closer to the drop, but the scout and portage are marginal.  Orion and I took different lines on the left.  Someday I'll get that picture from Paul.
The River did back off for awhile, until we passed the confluence of Grouse Creek on the left, which was carrying a substantial amount of water.  The next drop "Grouse Hole" comes after a left hand bend, though not a falls, it had a large hole at the bottom we all punched through inadvertently.  Take the time to scout all the way down to this hole.  Below Grouse Creek the river drops into a beautiful canyon that continues all the way to Surprise Creek: the 3 Bears put-in.  My memory of this section is fuzzy as we were paddling quite hard.  We arrived at Low Water Bridge at 5:45, 3 hours and 17 miles later.
This Run would be an excellent 2-day in early spring (March, April).  Although it would definitely maintain a great character at lower flows, I imagine this would limit the cleanliness and playspot density that we encountered at 2,000 cfs.  It is probably good down to 1,000 or less, though you should expect more sieve and pin hazards at lower flows.  Despite the major drops (which can be portaged relatively easily) the run has more of a class III-IV character, and should be on more class IV boaters' to do list.
Posted by Daniel Menten at 10:42 PM