This run was definitely not on my radar.  My motivation to run something new however, caught my interest immediately upon talking to J.R.  He was the brains of the operation, and had already roped Bearfoot Brad, potentially the worlds most weathered shuttle driver into aiding our mission.  Allow me a minute to plug Brad's Shuttle service on the Smith River.  Brad is a virtual black hole for knowledge about the Smith River; he absorbs all and will tell you as much as you are willing to ask...Be careful, the stories are all true!  He takes shuttle driving to a whole new level, tricking out his truck to maintain the shuttle road, and exhuming the courage and willingness to drive shuttle that you wish your girlfriend had. 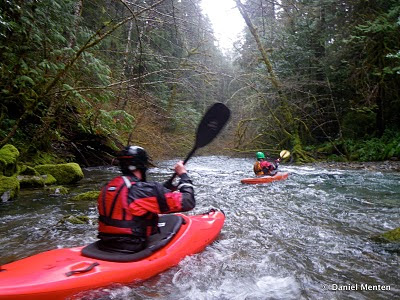 According to Brad, it had been approximately 5 years since he took a crew to the Upper N.F.  Apparently they got separated and wound up hiking through wilderness in the dark.  This I tried to laugh about on our drive to put-in, but you can't help but wonder.  After leaving Gasquet at close to 11:00 A.M. our drive took us to the Ray's in Smith River where Wes purchased a delicious cut of Tri-tip off the BBQ outside and I was lucky enough to find some granola bars (past their expiration date).  The place was a total madhouse...there was about 75 random kids and all their parents in attendance for a planned 'easter egg hunt'.  Free coca-cola for everyone!  I must admit, beer in hand, I felt a little out of place.

But then we were gone like a whirlwind, and driving up the Winchuck River Rd.  It was a beautiful drive through unfamiliar territory, where the pretty girl (she was pretty) seemed to be impressed with Wes' large truck.  We averted the potential situation and continued up the road unabated, for we were on a mission.  It turns out the Upper NF shuttle road is actually lower than the normal put-in road.  We were able to follow our map and turn onto the proper road (290), and were immediately driving through overhanging bushes and trees weighted down with 6-inches of snow.  After a couple of miles of this we reached an impassable fork close to 2-miles from the river.  It began to snow as we declared this the put-in and geared up quickly. 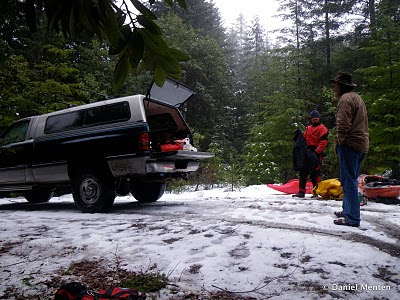 After a mile hike down the road, we reached its terminal end. 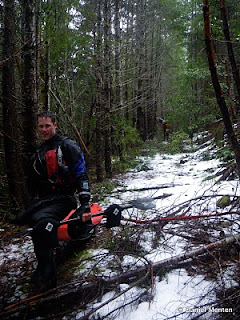 Unable to find any real trail, we dropped into a gully on the right that proved to be fairly easy going.  It was steep and woody for about 1/2 mile until we reached a flat spot and the river.  The forest was completely old-growth virgin, enormous douglas-fir trees, hemlocks, port-oroford cedars and possibly redwood.  We devoured the tri-tip, and put-on probably close to 2:30.  The run was entirely the opposite of the standard North Smith Run, with beautiful healthy forests on both banks and smooth dark mudstone rocks. 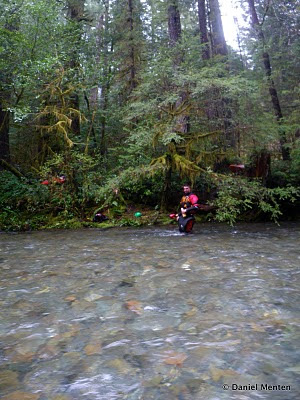 This section felt more like the middle fork run above siskiyou gorge, though not quite as difficult, and with more wood. 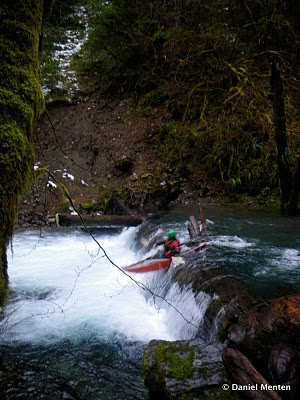 In all, we portaged about 4 times due to wood, but had another 8 log ducks or so.  Our level was ideal for ducking wood, without being too low.  The river grew in size gradually, and passed through 3 separate gradient sections before its meeting with Baldface Creek.  One of these had a sweet bedrock pinch with several ledge drops and mellow holes. 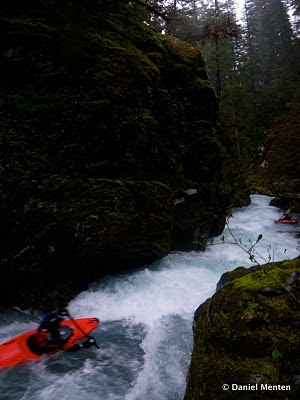 I had been waiting and waiting for the Chrome Creek confluence, though we passed it without making any visual contact.  I did notice a sudden increase in water, and mile or so later we reached a large horizon line.  No time for pictures, we charged through the best and longest rapid of the entire run, a big and sweet class IV.  Upon our arrival at Baldface Creek we stopped for a well-needed break.  Baldface creek was easily larger than the North Smith at the confluence. 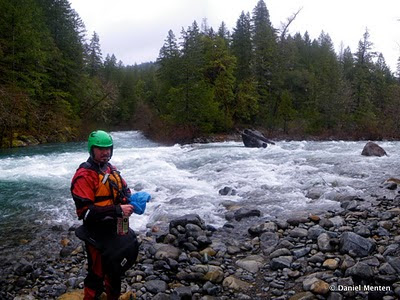 Cold times call for cold beers...Baldface coming in on the right side of the frame
Below here the character of the run changes completely and assumes the standard N.F. feel for the remaining couple of miles.  Props to Brad for coming through, waiting at Major Moores...good trip 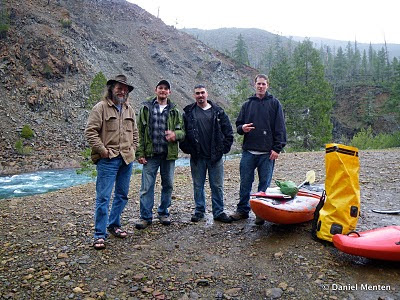