South Trinity: HWY 36 to Hyampom--Day One Klondike Mine to Sulfur Glade Creek

To All My Paddling Friends,
I don't know of any reason not to do this run.  This has to be one of the most accessible and classic class III-IV (V, P) overnight runs in the country, and will probably be flowing for awhile longer.  I can't recall another river I've paddled with the same abundance of sweet wilderness camping spots than the South Trinity (Bruneau, Selway, M.F. Salmon, Grand Canyon, Rogue River & S.F. Salmon included)  In fact, I would rate the South Trinity among these rivers for the quality of scenery, solitude and beauty.  If you have done these rivers, you will undoubtedly appreciate the S.F.T. for its unique scenery and feel.  This shot is from S.F. Mountain, overlooking the Mad River, with Red and Black Lassic Buttes (Van Duzen Drainage) visible behind.

After paddling Lower Hayfork Creek a couple of days earlier, I convinced my buddy Warnertime to help leave my truck in Hyampom, at the bridge over the south fork (not recommended take-out).  Shuttle set, it was time to find someone to paddle with!  Several calls and messages later (my phone was running out of charge) I knew Silent Ed would be the man for the task.  After a night on the couch in Rio Dell, Ed picked me up at 8:00 A/M.  We drove to safeway in fortuna for a food/booze buy, then proceeded to stop at Murrish market for batteries to run the Ipod...then we stopped in Dinsmore so I could buy some sunglasses.  Ed then decided he wished to take a side-trip to check out the upper Van Duzen (class II-III).  Several more photo stops later, we finally arrived in Forest Glen and managed to put-on the water by 1:00 in the afternoon. 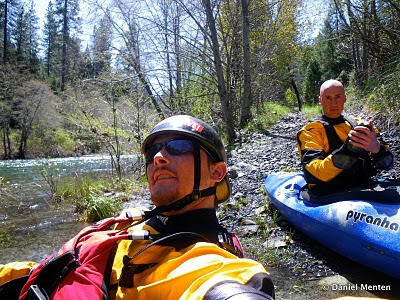 The Klondike Mine section has a great warmup before you get into the steeps.  Several small, technical rapids precede the first major rapid.  For the most part the run is actually not very difficult, despite containing substantial hazards (undercuts, sieves, logs) to avoid.  For rafts, I would recommend slightly higher flows than we had (1,100 @ Put-in) to provide coverage and more space through boulder-gardens and willowy areas. 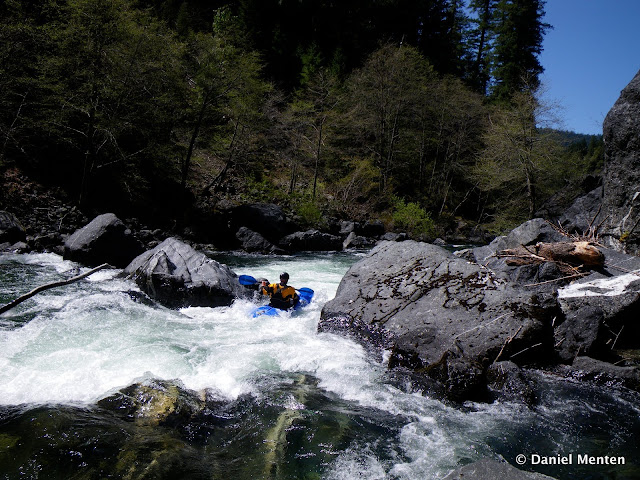 The nature of the river makes boat-scouting quite tricky, so I recommend scouting whenever in doubt (through Klondike Mine).  The first big drop is a long and complex affair, that would be difficult for raft passage at our flows.

After the initial wave of rapids, the run backs off again for a little bit until arriving at the major drop: Holey Schist!  This rapid is a holey affair and I mean water through rocks.  There is a sweet line down the right, that proved to be quite friendly for the loaded boats.  Ed sticks the line. 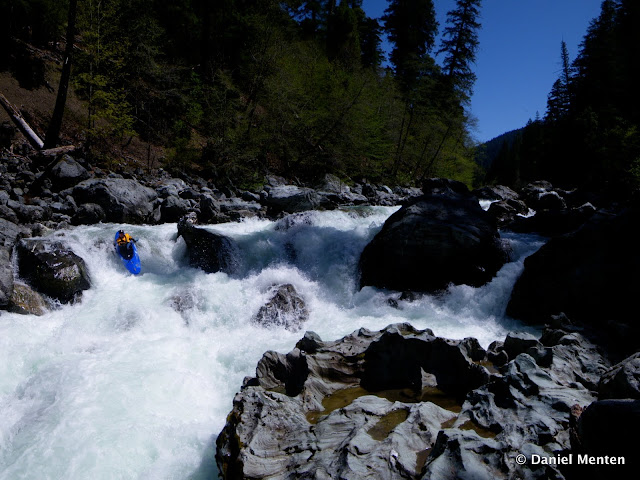 The portage down the left would be difficult, though not brutal.  After Holey Schist, fun rapids continue. 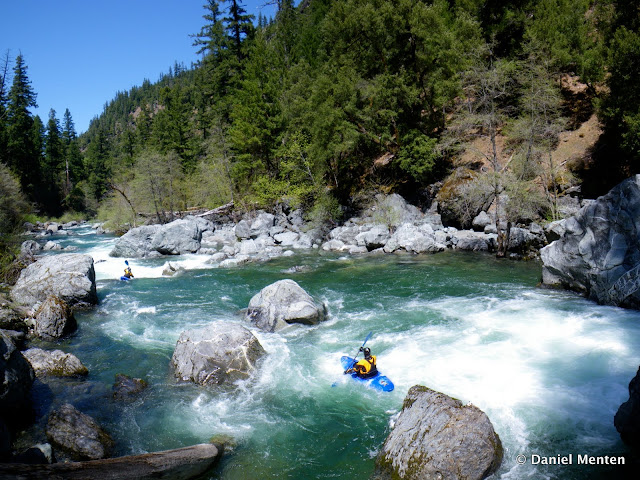 Eventually you reach the last major drop of Klondike Mine, with a nasty undercut on the left that draws most of the flow.  This is a longer rapid, and definitely deserved a class V- rating at our flow.  I don't have any pic's of this, but before you know it, the major rapids back off and the run gradually tapers off to IV- and then class III for the next 16 miles.  The Klondike Mine take-out is vaguely recognizable by a tailings pile 80 feet up the left bank.  This road has been decommissioned and is supposedly a 2-3 mile hike for access these days.  The float continues below here with a consistent pace with class III rapids interspersed throughout and a fairly even gradient.  There was a surprisingly small amount of flatwater @ 1,100, though in places the river coursed through tight willow and alder areas that could prove challenging for oar-frames.

The first major ranch comes on the left approx. 6.5 miles into the run, on the Left Bank.  A surprising amount of private property exists along this run, although most of the time the S.F.T. is flowing, residents don't have access to their land (due to snowed in roads).  South Fork Mountain, on the left, produces innumerable side-creeks that constantly add flow to the river.  After about 14 miles you pass the Riversong Community, where buildings are on both banks.  Approaching the river spirit community: 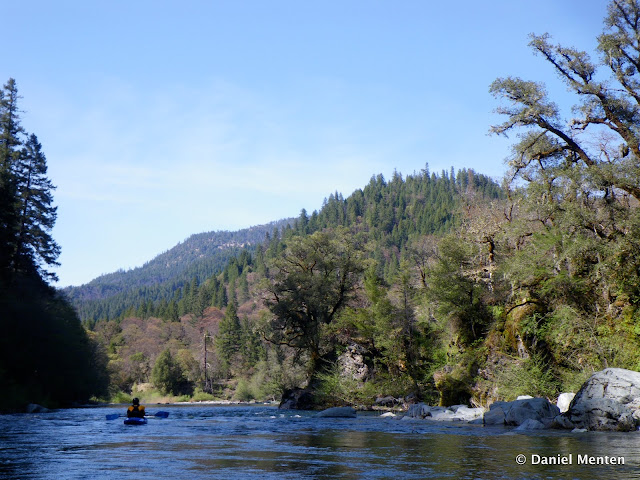 We couldn't help but check out this vintage Perception Eclipse, located behind an unguarded fence. 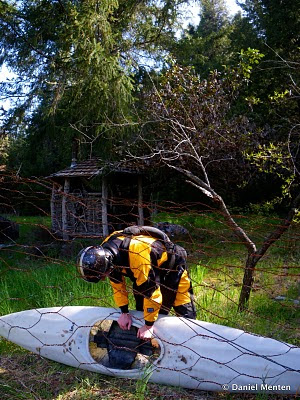 The South Fork sure is beautiful

Below here fun rapids pick up again for several miles. 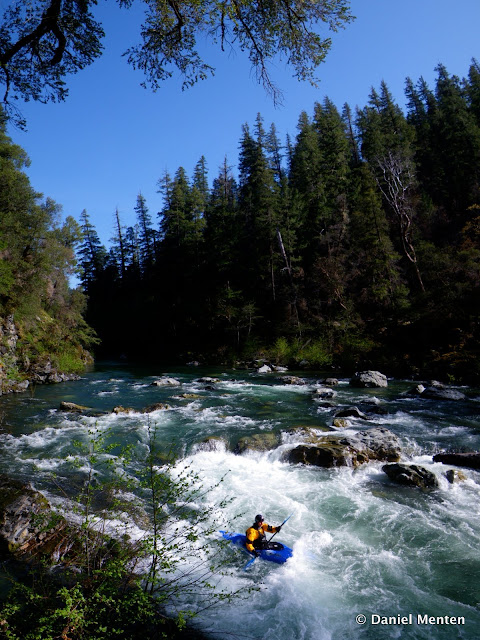 After a while, I decided it was time for some beers and we started looking for a campspot.  The trouble we had was picking one!  We passed by one killer spot, then another o.k. spot, then passed by two more killer spots before arriving at the killer spot we decided to be our camp.  I loved this spot, with a huge beach, ample wood, and enormous grassy flat above.

We definitely saw some signs of life, though only one human and two dogs were aware of our presence along the trip.  This compared with the bald eagles, osprey, herons, goose, ducks, deer, lizards, frogs, turtles, woodpeckers and countless unique endemic plant species that inhabit the area.  See day two for more...
Posted by Daniel Menten at 7:59 PM