Howdy everybody,
It's been a busy winter thus far.  Lots of water and surf, but lots of work to be done as well.

When the rains came New Years day, we decided to head back to the Bears, which was flowing a respectable 13,000 cfs. at Hyampom.  Luckily for us, we timed it perfectly and put-on the peaking river, still well within its banks.  Our crew of 6 consisted of three playboats, two creekers, and an inflatable cataraft.  While we were gearing up at put-in, a second crew of two older (and mellower) paddlers arrived and got on the water ahead of us.  I was surprised to see them at such high flows.

After being away from Idaho for so long (~10 yrs), it felt awesome to be in big, pushy water again.  The typical eddy line was 10-20 feet wide complete with whirlpools and crazy boils.  We were expecting to get down the run in 20-30 minutes due to the high flow, but we were dead wrong.

Right away, the first corner has a sick breaking wave on the right.  The eddy service was marginal, but if you wanted it, was possible.  The river continues through fun and large wave trains with occasional play spots created by inundated house-sized boulders.  After Todd Ranch, the play gets better until you arrive at the Bears. 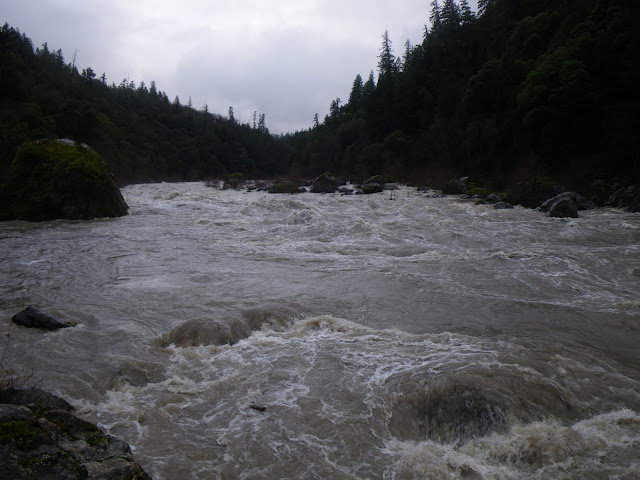 Our attempt to scout the first bear was foiled by the inability to see the river features from the bank, over 200 feet away.  No worries though, it turned out that all of the lines were the same as low water, just bigger.  Remembering the importance of the "buddy system" in big water, I peeled out with Matt Tolley and into some of the biggest water in years.  Next came the rest of the crew, with Grant flipping at the top and running most of the rapid upside down.  In his typical "no-swim" fashion, he made a crux roll, dropped into the biggest hole of the rapid and flipped again.  Everybody caught the eddy on river left as the wave train continued all the way to the lip of Mama Bear. 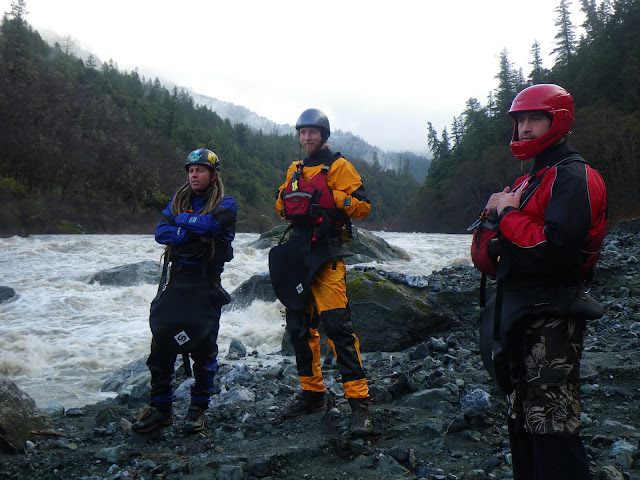 Mama Bear was easily scouted along the left bank, where you can get a good look at the Mother of all holes.  Our crew was nervously hemming and hawing along the left bank for at least 30 minutes before Ryan da Rafter stepped up to give her a go...Remember what I said about the "buddy system" in big water?  Well we had a breakdown in the buddy system, as I was on the bank holding my video camera and everybody else was watching Ryan's line, trying to psyche themselves up.  What happens when the buddy system breaks down is the true story of the day.  It's not often you have a cat-boat probing the lines.  Mad props goes to Ryan for stepping it up and probing out the line with his cataraft! 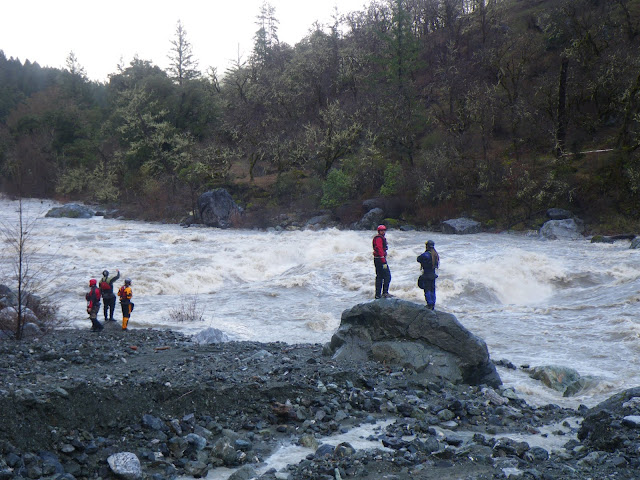 Ryan made the entry to Mama bear and approached the crux hole, staying upright with a vicious high-side.  While scrambling to get back on the oars, he dropped into a second hole just downstream and proceeded to get rodeoed directly from his boat and into the maelstrom.  Fortunately Ryan is an incredible swimmer, and deftly made it to the left bank (just downstream was a willow jungle with thousands of cfs flowing through.)  Ryan's cataraft, however didn't make it to the bank, and proceeded downstream through baby bear.
The scramble was on.  I put my camera quickly away and darted to my boat.  Tolley was waiting in the eddy at the top and he peeled out alongside me.  We both managed good lines through the 100 foot wide crux hole, and checked in with Ryan who was O.K. on the bank.  We then peeled back out in the current, dropping into Baby Bear.  I scrambled hard right, barely missing a macking pour-over that Tolley proceeded to drop into and recieve a proper spanking.  The chase was on!  We couldn't even see the cataraft, which was already en route for the Pacific Ocean.  Thinking to myself of possible eddies that the boat might catch before take-out, after a couple of miles we were quickly approaching the take-out when I finally caught sight of the boat, encouraging me to paddle harder.  Finally, less than half-mile from take-out, I saw the boat get surged by a pillow into a tiny whirlpool eddy carved into the cliff wall, complete with whirlpools and large woody debris.  It wasn't that gnarly, but it definitely wasn't a comforting spot.
I forced the boat into a corner of the eddy, and clinging to some alders managed to get myself and my kayak onto the cat.  Tolley and I "cooled out" and waited in the cleft eddy for awhile before deciding our best option was to get downstream to take-out.  Well, I'm no big water catarafter, and surfing the boat across the pillow was enough to get my juices flowing.  But we made it to take-out without incident, and started carrying the cataraft up to the shuttle rig to stay warm. 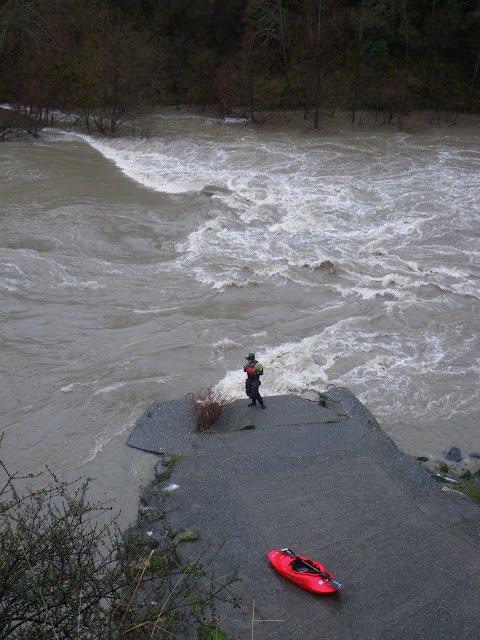 Meanwhile, the rest of our crew was dealing with getting Ryan back to the river right so he could hike out.  This went smoothly, however in the melee Howie (from the other group) took a swim and proceeded to lose his paddle.  After hanging out at the low-water bridge for over an hour, Matt and I saw a paddler come walking down the road on the other side of the river.  Minutes later, our buddies arrived with a kayak in tow.  Fortunately we were equipped with a breakdown paddle which we ferried over to Howie and watched him nervously as he made the ferry across to take-out.

I consider the mission a great success, we managed to get everyone and all of their gear (minus one paddle) safely to take-out, where we enjoyed some Boont from the can.  "Bahl Hornin'"!  The lesson of the day, however, is the importance of the buddy system in big water.  At 13,000, I give the Bears a class V- rating, merely for the fact that any swim could be long and troublesome...the play was awesome, all of the lines were the same as low-flows and I can't wait to do it again!
Posted by Daniel Menten at 1:17 PM