On May 2nd, 1993 a group of kayakers attempted a first descent on the upper Middle Fork that flows from the Yolla-Bolly wilderness.  This trip resulted in the fatality of early Czech paddling phenomenon, Jaroslav Mach, forcing abandonment of the trip and generating a bad reputation for the river.  There is literally no information regarding this 22-mile stretch of river or of the attempted first descent, merely a tragic legend from Lars Holbek’s NFMF Feather River Description on page 128 of The Best Whitewater in California.  After one of the wettest Northern California springs on record, we decided it was time to revisit the Upper Middle Eel.

History: Round Valley Reservation
The drive to the Middle Eel takes you through the beautiful Round Valley.  Round Valley is culturally and geologically unique.  The original inhabitants of the area were the Yuki tribe who established themselves thousands of years ago.  The Yuki lived in this harmonious setting for millennia until the arrival of white, gold-seeking settlers in 1854.  Conflicts escalated in 1856, and the entire Middle Eel Watershed was designated “Nome Cult Reservation”.  This was probably due to its remote setting and a lack of gold-bearing rocks, but officially to ‘protect’ local tribes.  By 1864 however, the reservation was reduced to 1/5 its original size and became known as the Round Valley Indian Reservation. 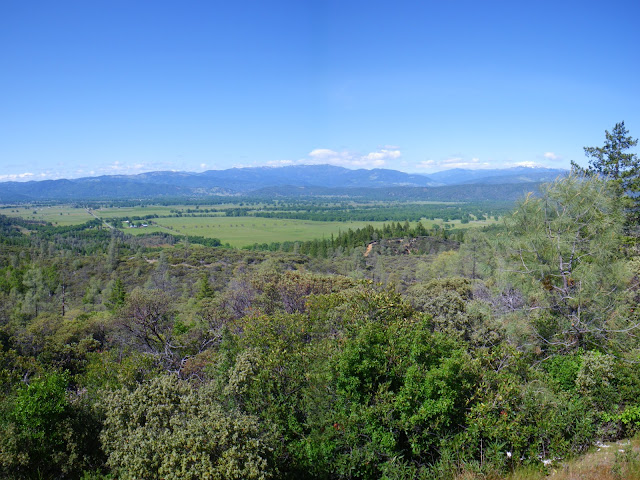 Round Valley
Because the land was considered to be of little use to the white man, other Native American Tribes were displaced from all around Northern California and forced to relocate here.  This includes the Nomlacki, Wylaki, Lassik, Sinkyone, Pomo (Including Cahto, Kabeyo, Shodakai, Yokayo, Shokawa, Shanel, Kashaya, and Habenapo among others), Wappo, Concow Maidu, Colusa, and Achumawi.  These tribes were relocated here prior to reducing the reservation size.  The Nome Cult Trail was named after 461 Native Americans from these various tribes were forced to march a veritable “trail of tears” guarded by soldiers.  Leaving from Chico on September 4, 1863 they marched across the central valley and over Mendocino Pass, reaching the Eel River Camp (the Black Butte River Confluence) on September 17.  The trip resulted in 32 deaths, a few escapees, and 150 natives who were left behind since they were too sick to continue.  Men, women and children were all forced to make this 100-mile march to the Nome Cult Reservation that finished a day later.  Following these events, the Round Valley Reservation remained relatively unaffected for nearly a century, until water politics forced the re-appearance of government bureaucrats and legislation.
Geology: Yolla-Bolly Mountains:
The Northern Yolla-Bolly Range marks the southern terminus of the Klamath Mountains geologic sub-province.  The higher peaks are volcanic with abundant granitic and basaltic formations.  However, the southern extent of the range through which the M.F. Eel flows contains almost entirely coastal-origin metamorphic and sedimentary rocks.  This river has some of the most unique rocks I have ever seen, from gorge walls lined with red and green chert to sandstone bedrock and enormous calcite boulders.  In fact, the most similar scenery lies along the coast.  Though we expected menacing undercuts, man-eating sieves and gorged-out mandatory rapids, the river turned out to be amazingly clean and runnable.  Passing through a sandstone bedrock gorge on one side, with a grassy hillside on the other is an amazing and beautiful experience.  Nearly all of these grassy slopes are evidence of active earth flows, rather than past logging practices. 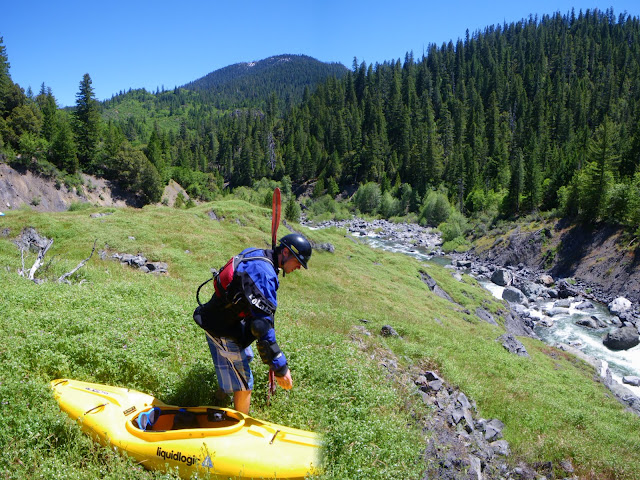 Orion Portages Asa Bean
This river is prone to massive high-water events, clearing the channel of any wood hazards at our flow.  This also results in unstable rapids that may be likely to change annually.  During the unprecedented flood of December 22, 1964, the estimated discharge of the Middle Eel at Dos Rios was 270,000 cfs.  This major event caused massive changes throughout the watershed, resulting in what the early paddling community described as a drastic change, namely “all the intermediate and advanced runs on the Eel became easier by about 1 class.”  This resulted from massive deposition of sand and gravel into the river channel, produced from countless landslides due to clear-cutting.  In fact, studies have shown that the average depth of pools in the Eel River watershed has decreased, reducing the abundant cold-water refuge that native Summer Steelhead and Spring Chinook Salmon require.  Not to mention that fish numbers in the Eel River drainage and entire Northern California have dropped as well.
Recon Run:
On May 22, I picked up my friend John Warner and headed south to check out the Middle Eel, flowing 2,000 cfs. @ Dos Rios.  We made the long haul through Laytonville, Covelo, and beyond the Black Butte River confluence to where it leaves the highway.  Much to our dismay, 7 miles up the road we were stopped by a locked gate.  After making the journey however, we were committed to getting on the water.  On our drive back we found a forest service road that descended towards the river, and we followed it to the end.  This put us at a beautiful campsite above the final class III-IV gorge 4.5 miles above the Black Butte.  We were able to descend a delightful grassy hillside all the way to the river (1 mile hike) for an easy-access run with a bike shuttle to boot.  This only whetted our thirst for more adventure in the drainage.  On our way out, John asked the Ranger when the gate would be open, and he informed us it was supposed to be open, but the fire crew had unnecessarily locked it. 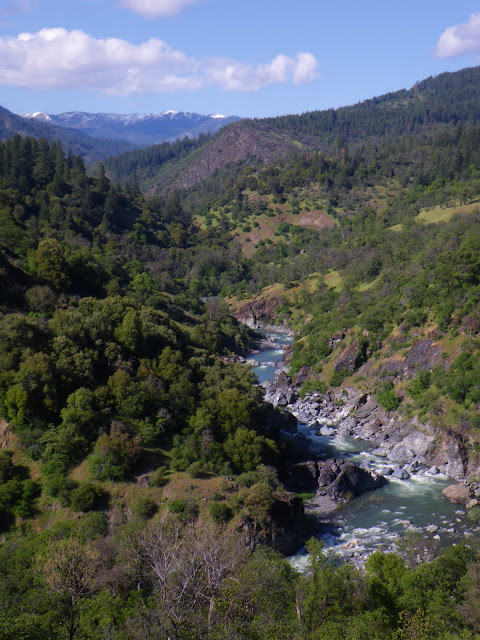 Looking upriver near Black Butte confluence
Upper Goods: Day One
Two weeks passed, and we returned with a solid posse of five.  Mike Lee, Orion Meredith, John Warner, Silent Ed and myself made the haul beyond Covelo to get the goods.  The flow was 1,650 and fluctuating daily due to snowmelt so I called the Forest Service office to check on road access and was told that the road to Indian Dick was open.  This would allow us to reach the headwaters of the Middle Eel above its confluence with the North Fork of the Middle Fork (NFMF).  The logistical plan was to break the run up into two sections, hiking out at Pothole Crossing where the road comes close to the river.  This would grant us the ritual paddle without loaded kayaks, as we were anticipating lots of portaging. 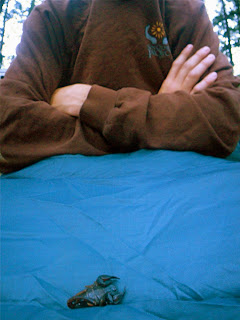 We made the long drive, eventually camping at Hammerhorn Lake.  That first night the Scorpion King visited Orion; the local wildlife was advising us to be on guard.  The crew got an early start, setting shuttle and arriving at Lucky Lake close to 8:30.  This put us on the trail by 9, although we didn’t reach the river and put on until 11.  We were excited for the reasonably early start as the ten-mile stretch averaged 105 feet per mile.  This section required a 3-mile hike down a road and decent trail, although we did note that the game trails are much more heavily travelled. 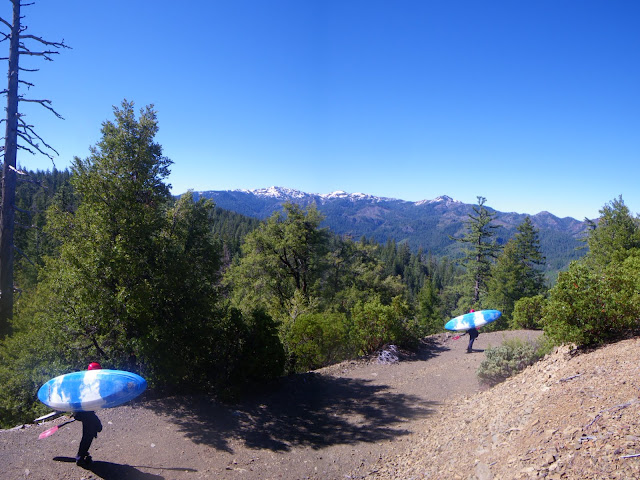 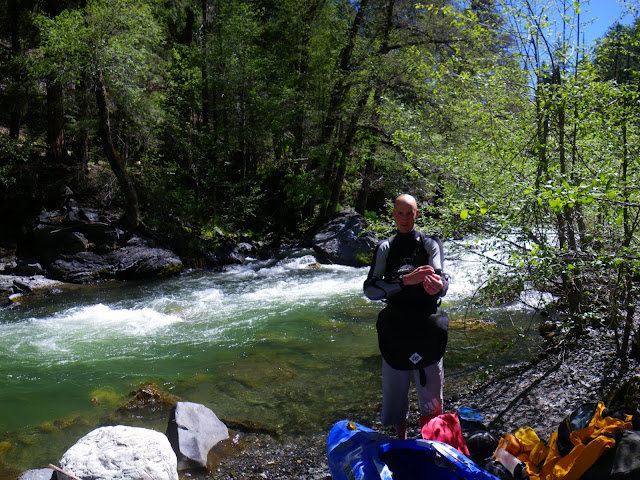 Silent Ed at Put-in
The first mile of paddling to the NFMF was small and creeky; approximately 150 cfs carried us through class III-IV boulder gardens, culminating in a solid class IV canyon above the confluence.  Due to the extremely warm day, Ed decided he was going to skip the drysuit and go skin to wind...this didn't last long and shortly after the NFMF we stopped so he could don his drysuit.

The additional flow at the confluence immediately opens up the riverbed, and after an easy mile of scenic water, we started dropping through continuous class IV boulder gardens. 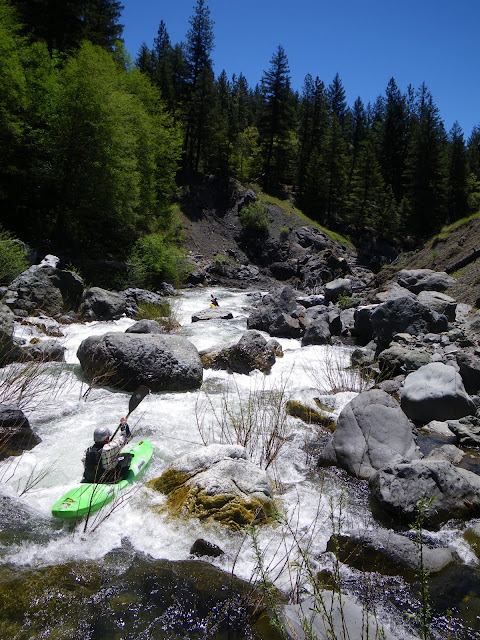 Then it was time for a little nap 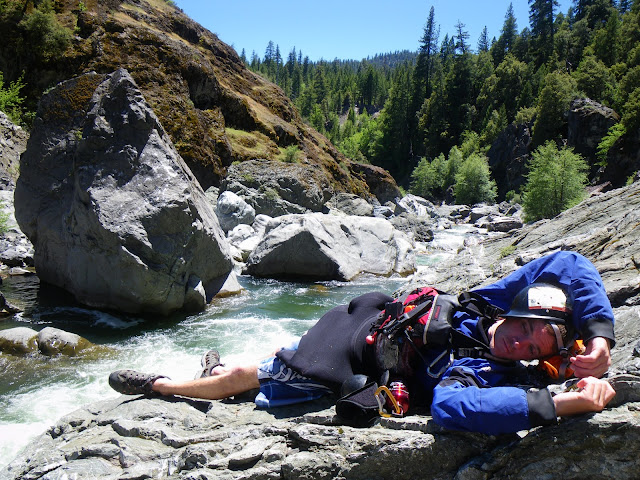 The canyon was incredibly open, and the river occasionally flowed around the base of enormous rock walls, despite an open grassy hillside along the other bank. 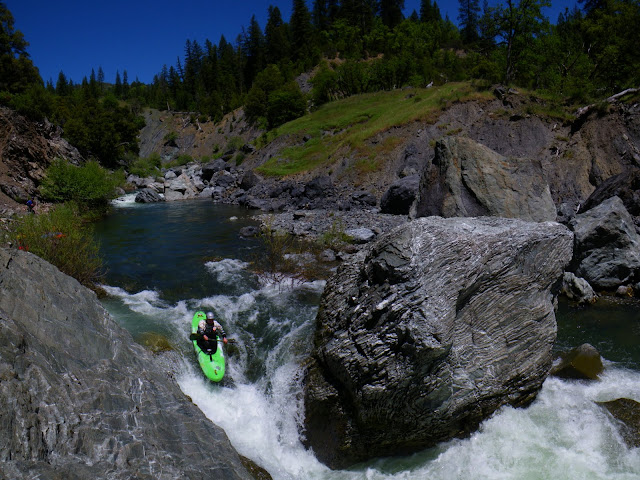 After several fun miles of water and significant tributaries to add flow we arrived at Asa Bean Crossing. 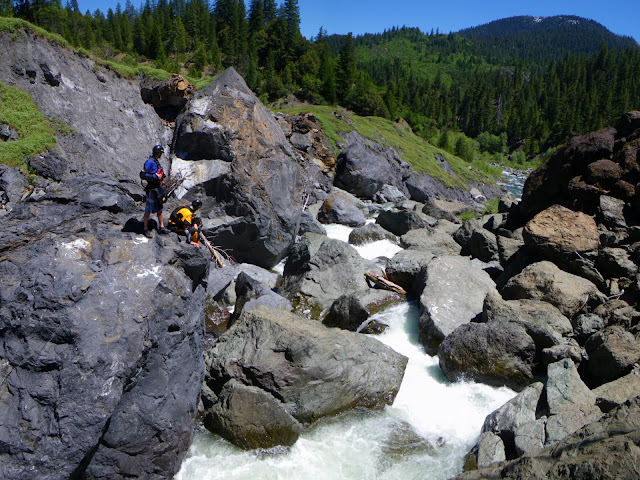 I recognized it immediately from a picture in the Wilderness Map and marveled at the stunning stretch of river that dropped through enormous sieves and house-sized boulders.  We portaged through a field of waist-high grass sans-ticks reminiscent of an Austrian landscape.  The ground was incredibly unstable, with cracks, fissures and slumps hidden amongst the grass.  Lucky for us it wasn’t totally moist shoe-robbing goo. 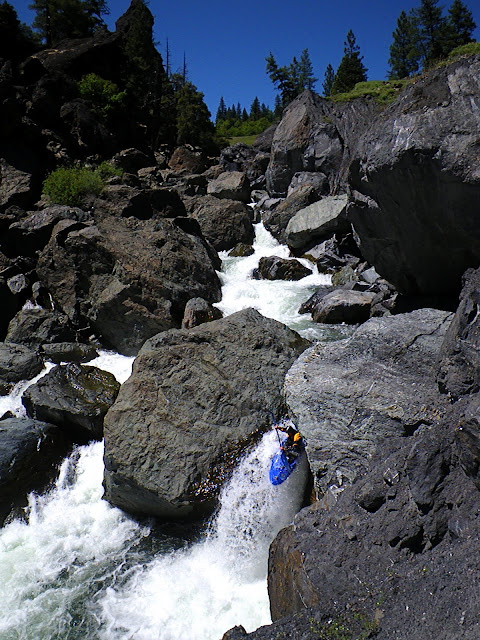 Silent Ed lets his paddling speak for itself 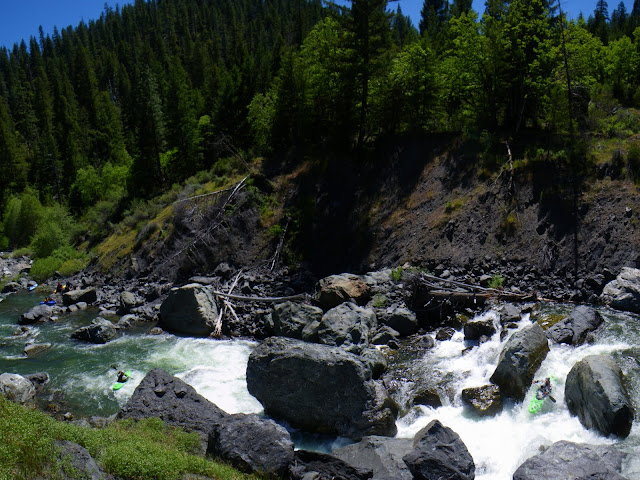 John Warner cleans the next drop
Ed and John paddled the run-out from the portage that contained several large drops.  Below here more fun rapids continue, as the gradient mellows and the river flows through some gorges of red and green chert. 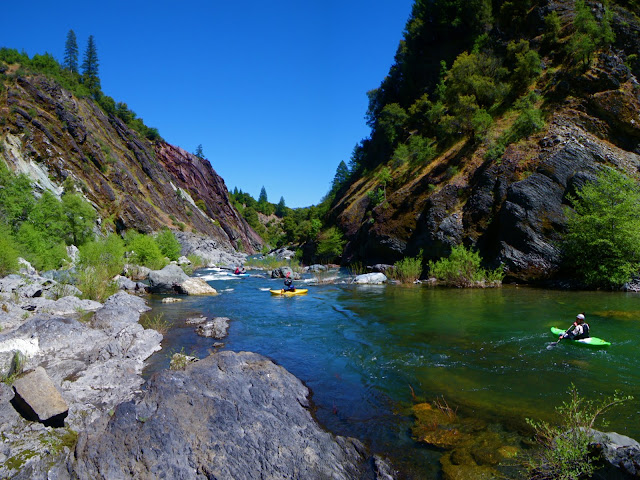 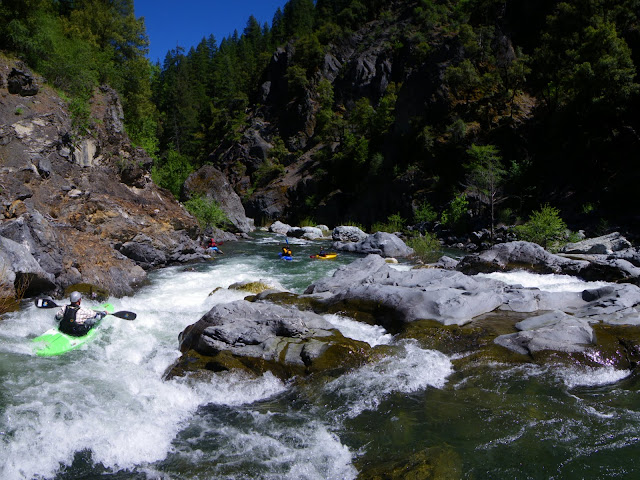 Fun Sandstone Bedrock in this section
Eventually you reach a major pinched out class V drop that Ed and John paddled, until the gradient relaxed for a couple miles. 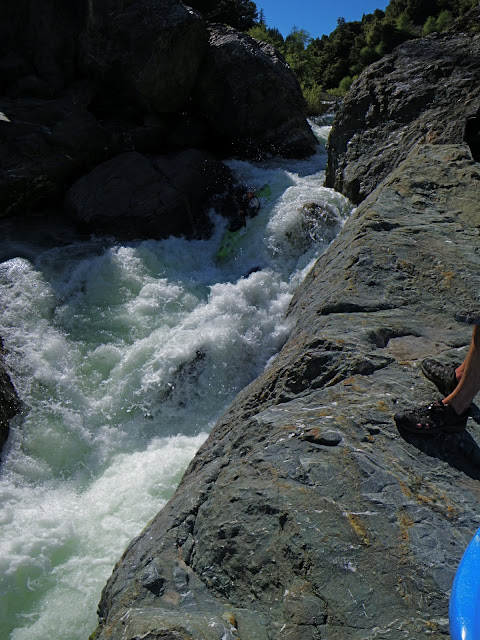 Warner styles the Pinch
By the time we reached Pothole Crossing it had been a long day on the water.  The hike back to the road wasn’t too difficult, as we were able to follow game trails, and happy not to be carrying our kayaks. 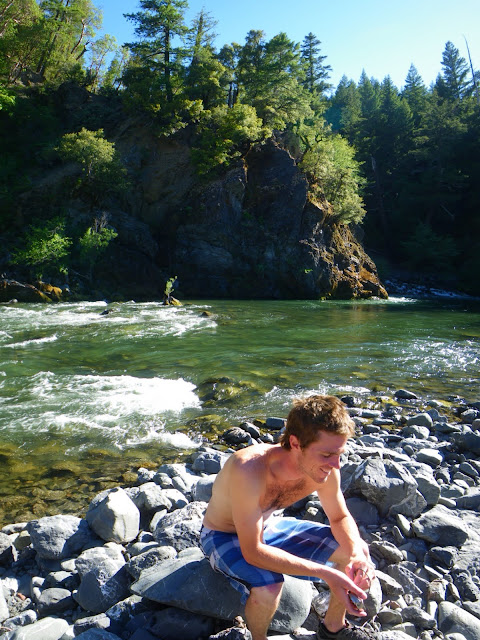 Orion reflects on a good day of boatin'
Sorry I didn't get this out sooner.
Posted by Daniel Menten at 4:14 PM