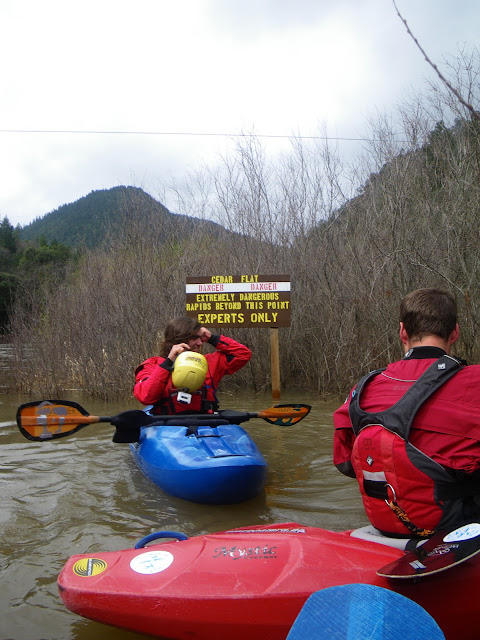 Here are my shots and account from an epic day on the water with a great group, meaning a solid group of friends!  The trip was cast when German David Ernst and the notorious Kyle Hull decided to join along with Wes Shrek and his creature craft.  I got the call from Dave, said I was in, and sent a text to Leif and Natalie who happened to be in town, telling them to meet us the next day.  Since moving to Humboldt over 10 years ago I have always wanted to paddle the BRG with this much flow. 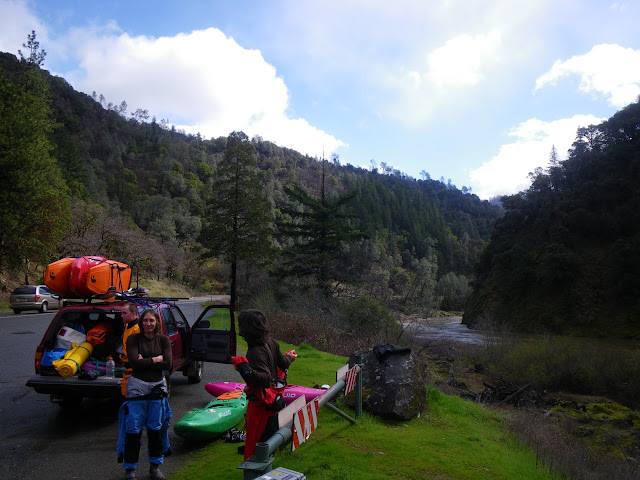 The day finally arrived, Wednesday March 16, and what a day it was.  Cold dark rainstorms would subside to a bright warm sun on and off all day.  Paul Gamache had joined the crew, electing to ride the Creature Craft with Wes.  Of course, it was Paul's first time in a creature craft.  After we got to put in, we kayakers waited for awhile, milling around while the Creature Craft was inflated and while Wes gave Paul the rundown on how to right the boat.  Then we were off and on the water. 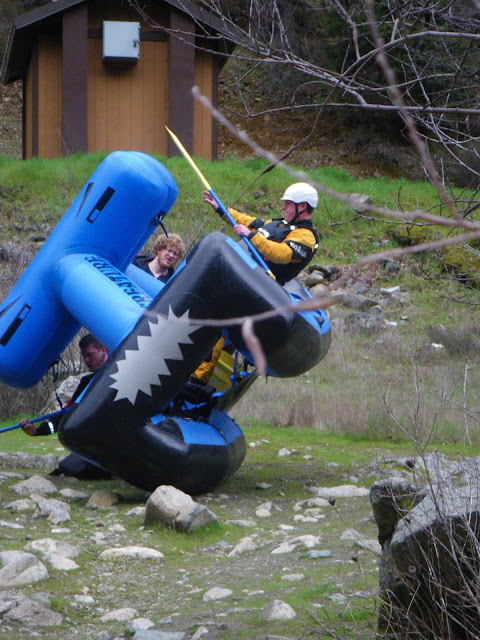 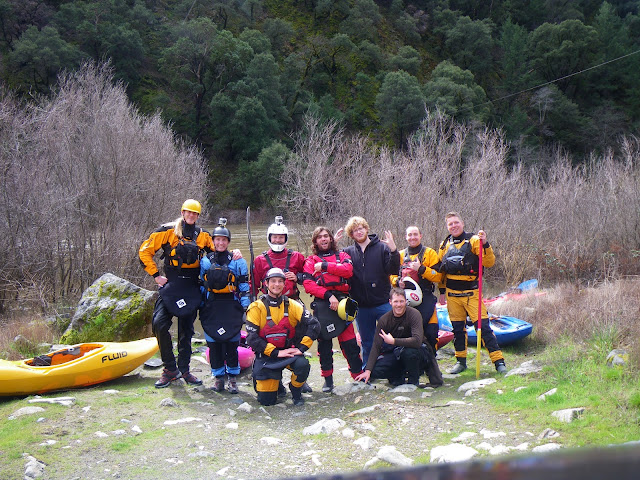 It was a solid crew and needless to say all of the boys were very impressed with Natalie because she was charging.  As we entered through China Slide, we were all too close together, and at one point I saw Natalie hold her breath for three solid roll attempts (like 200 yards or more underwater). Then we arrived at the Pearly Gates, which was one big wave into boils, and totally washed out. 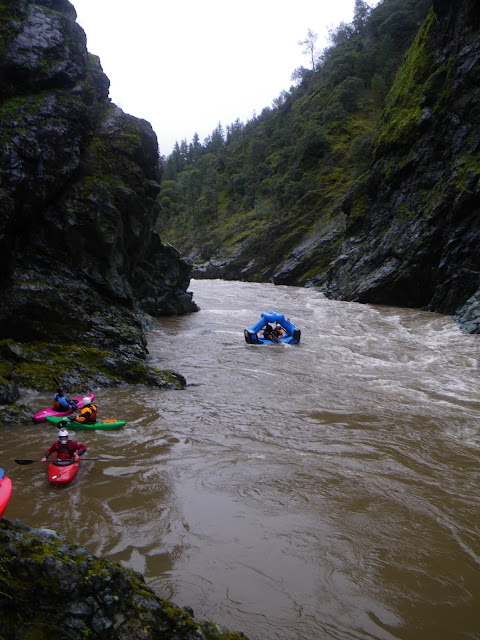 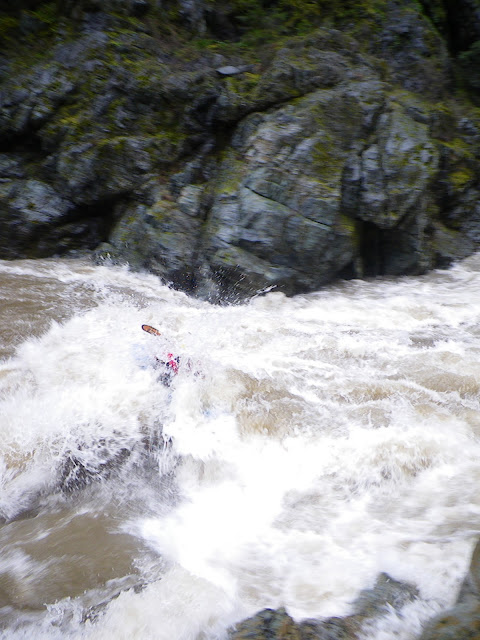 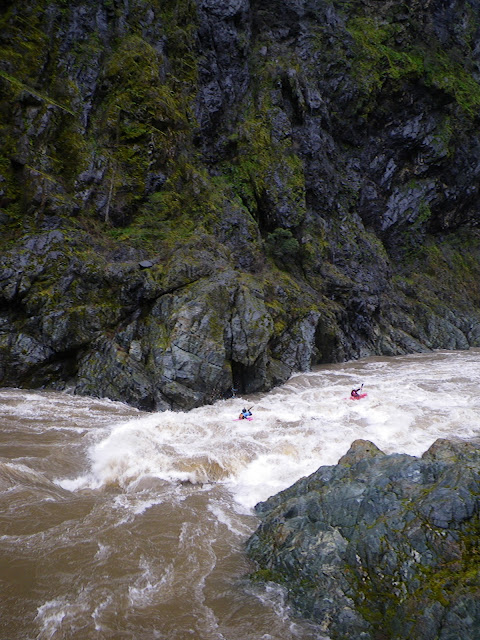 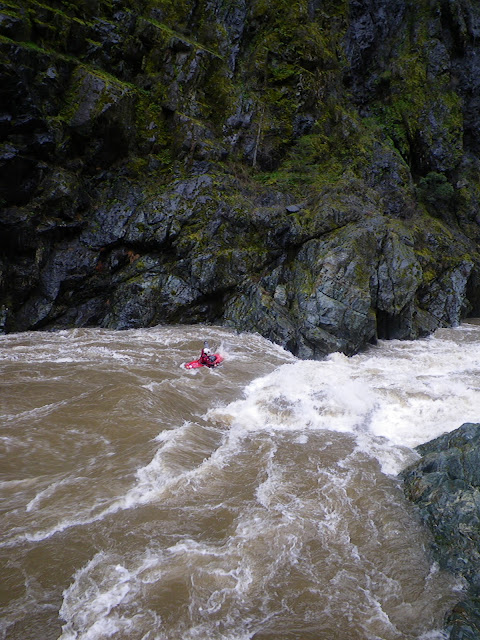 Downstream, the rapids continued to be washed out for awhile until we arrived at the Toilet Bowl, which had become a two-part rapid with a gigantic hole on the right (at the top), and another river-wide hole in the normal runout where a gigantic rock makes a nasty feature.  Time to scout. 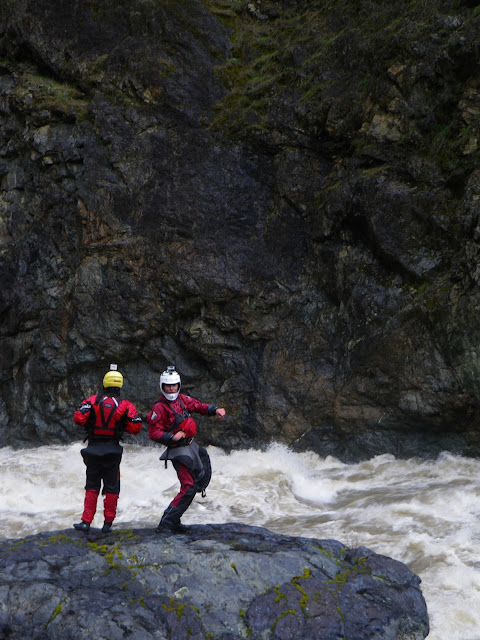 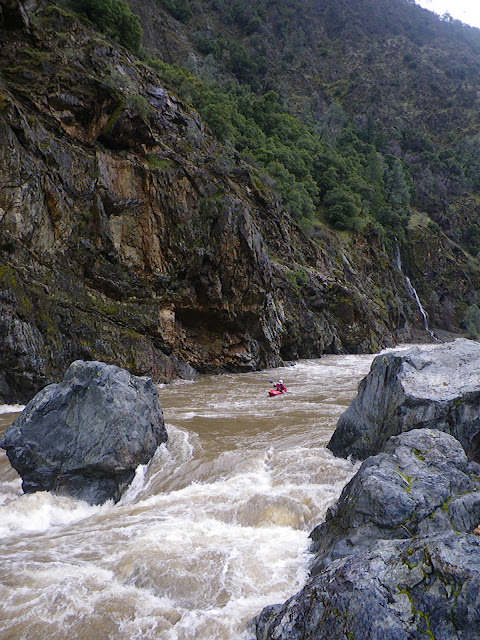 Leif and Wyomin' David Get After It 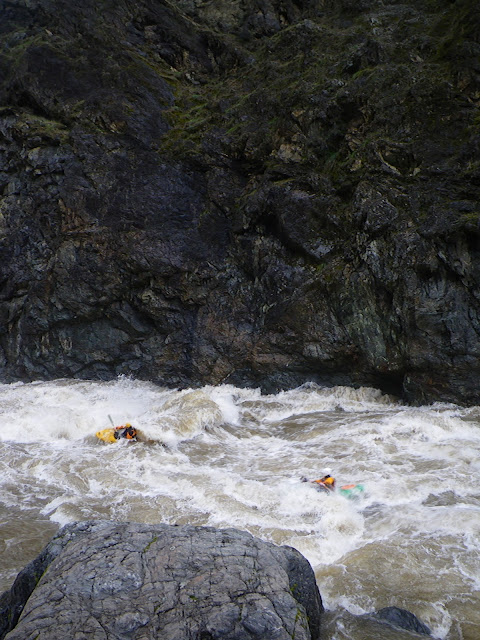 You can see they made it past the giant hole here 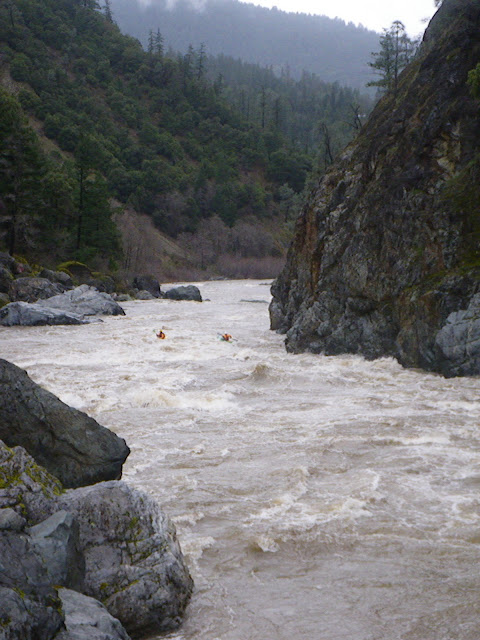 Good lines left everybody stoked and when we arrived at Lips (Double Drop) we got to see the creature charge through a massive hole, I remember seeing Paul really jacked up at this point, with the total look of fear and focus in his eyes!  Then it was time to scout.  Here you can see where Jon was posted up with the umbrella..right above #2. 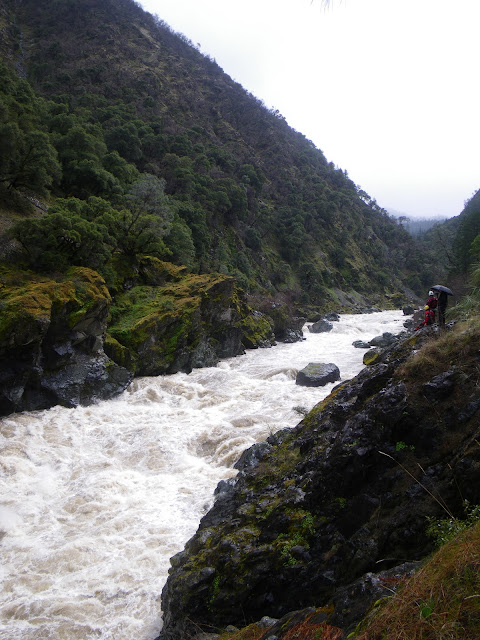 Scouting the Burnt Ranch Falls section took almost an hour, as we basically scouted the three altogether before dropping in.  There's pretty much no hope of stopping in between the drops, save for a couple of micro-eddies, and that's provided you can break the boil line.  Nevertheless, there was a line through all of the drops and it seemed like everybody was game so the first crew headed up to charge.  Kyle, German Dave, and Natalie.  Looking down at #3 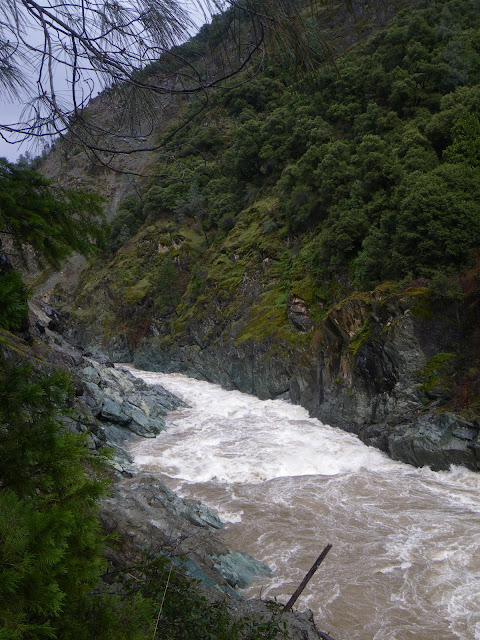 They all had good lines through #1 (Jaws), Dave and Kyle entered first, but Kyle exited first too! 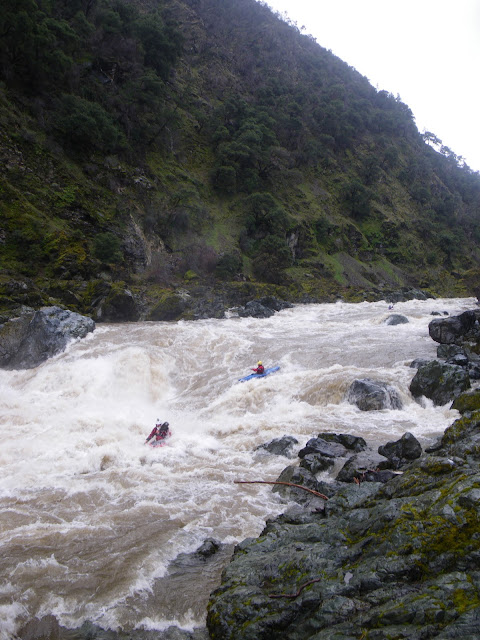 Natalie had a surf in the hole and got eddied out but had no problem portaging over a rock rather than trying to surf the surging pillow feature out in front of it (smart decision!)  By the time she was in the eddy, I looked downstream to see Kyle Hull finishing the Third Falls! 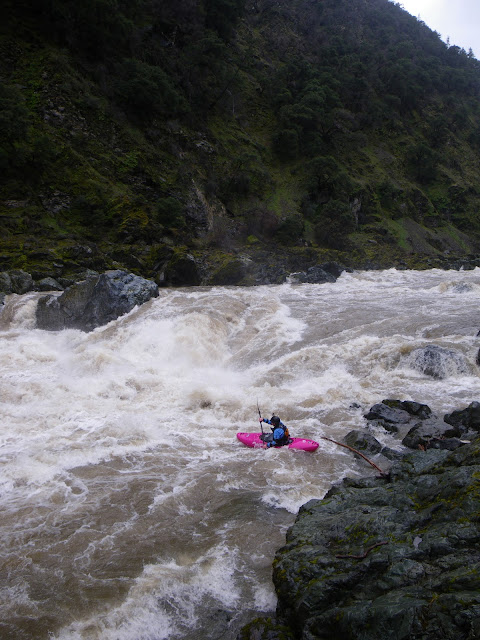 Natalie set safety while Wyoming David and I came through the first falls.  Here is David testing the reverse hole punch method. 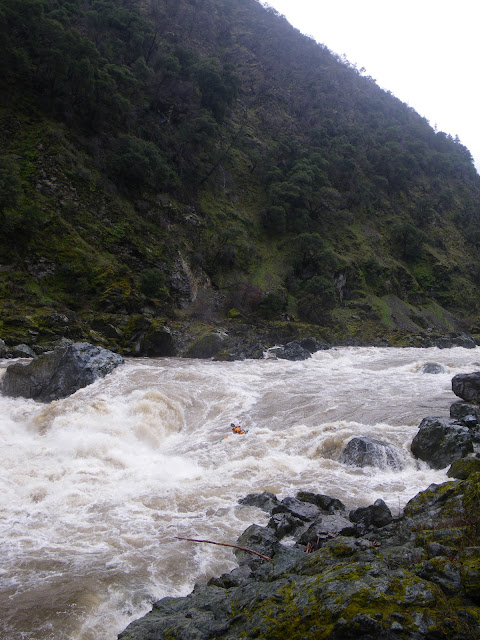 I came through fine, game on for sure, and caught a micro-eddy above #2.  Next thing I knew, Natalie was charging downstream past me and proceeded to have sweet lines through 2 and 3.  I charged through next and managed to gut through the middle of the biggest curling diagonal waves I've seen in a while!  So Fun!


The sun came and and it was time to watch the Creature Craft! 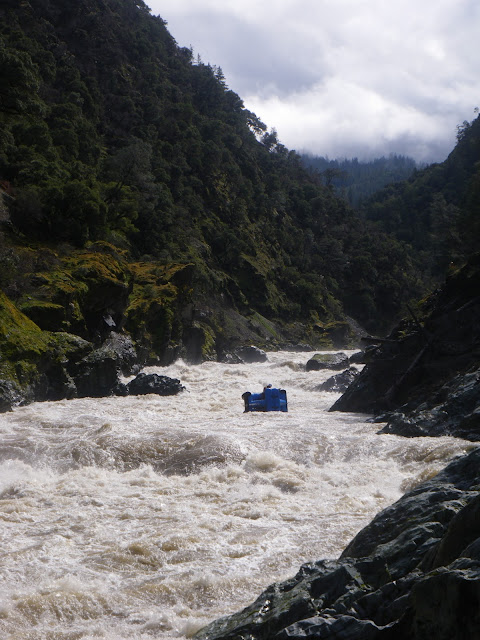 We were at the bottom of #3 and could see them hung up in Natalie's Eddy on the left side of #1, then they came free and charged into #2.  Good entry and then ohhh, a flip in the middle of the drop!  They washed up against the wall on river left with the boat on its side.  I could see Paul straining with all his might, just laying it out, trying to right the vessel to no avail.  Well, the straining didn't stop for awhile, he kept trying but him and Wes had their timing off and entered #3 on the side.  Paul took a moment to accept the moment. 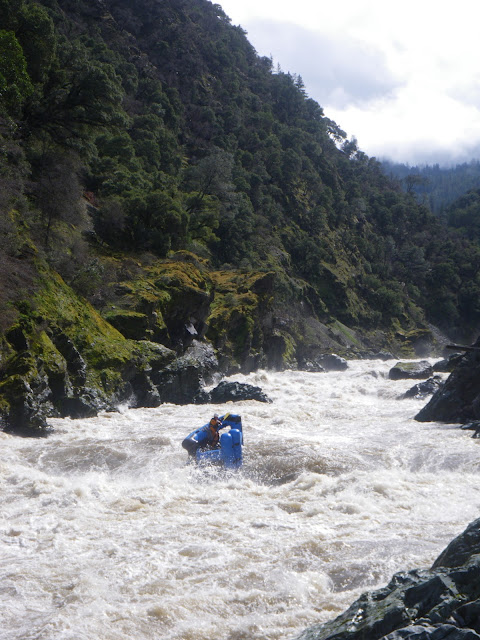 Then the boat just got rocked in the most enormous hole ever!  The boys did the full barrel role and clocked in a good violent 30 seconds before getting spit out and washing downstream.  They were around the corner from where we could see them before they were able to right the craft.  Lastly, Leif Anderson, Mr. Chaos Theory himself, came through and proceeded to have a sick line. 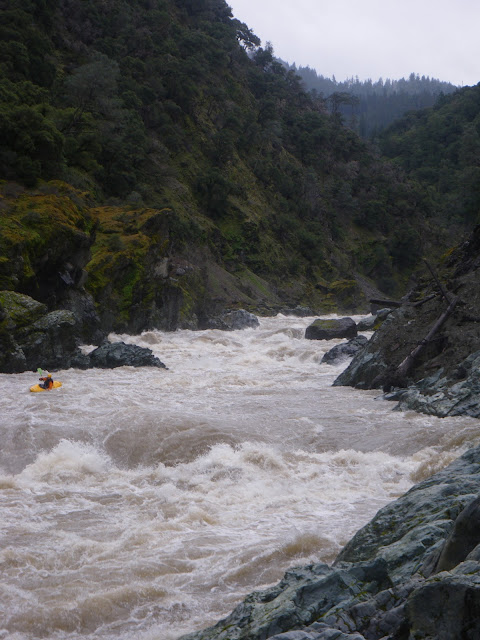 Leif popping through the Guard Hole to #3 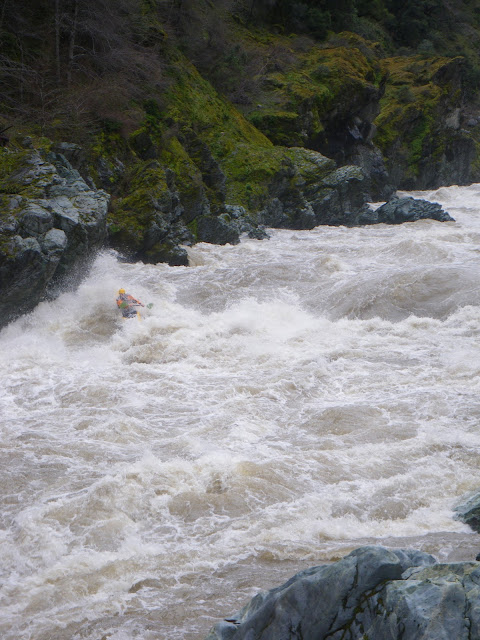 And Exiting through the Final Drop in Style! 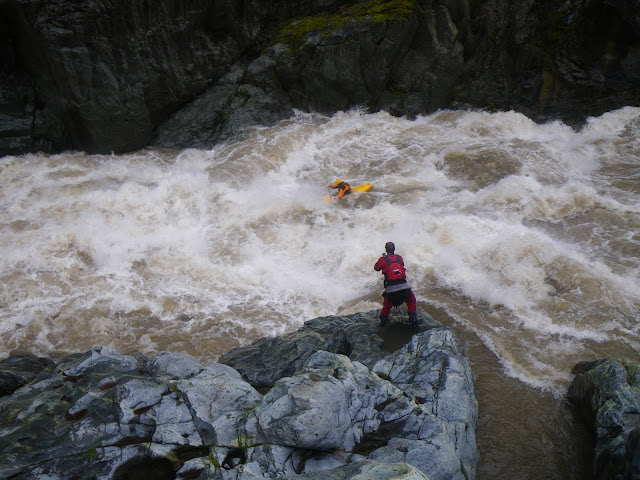 The rest of the run was better than the top half, with Hennessy and Origami both serving up sweet long rapids with extremely big water.  Then Table Rock, and the New River coming in, which was also Juicy.  We made it through Greyhound and then Grey's Falls, and the rain clouds subsided, parting for the sunshine.  This was perfect for all of us to relax and enjoy the beautiful weather, stoke and sense of accomplishment the day provided.  Good Vibes!
Posted by Daniel Menten at 10:37 PM