Upper Hayfork is an interesting run that is shrouded in a cloud of mystery.  When I first read the Stanley/Holbek description, it turned me off to the run.  All the talk of portages and fishladders on a class III-IV+ section just didn't sound too appealing.  The grossly inaccurate flow information provided in the book only served to perpetuate the less than appeal for Upper Hayfork.  It's true that the Dam is managed differently on the Trinity these days, but even in the 80's, 3,000 cfs on the Trinity @ Hoopa did not translate into 500 cfs on Upper Hayfork Creek.

To make a short story longer, I was talking with my buddy Alex Wolfgram one day.  I mentioned Upper Hayfork, and in his charismatic fashion "Duuuuude!  That run is awesome!" Alex proceeded to explain that the "portages" were actually the best rapids on the run.  Then, Upper Hayfork made my list. 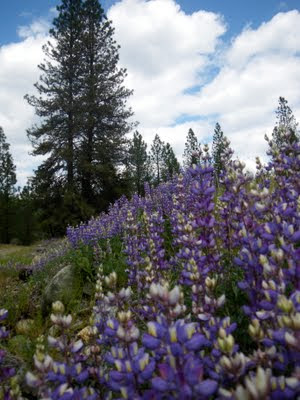 Upper Hayfork Country is just that, country.  Some very cool limestone outcroppings along the drive definitely peaked our interest though, as well marked signs for a natural bridge out here.  We set shuttle, and took off driving upstream from the East Fork of Hayfork Confluence at an obvious bridge.  Less than a mile upstream, the Fishladder is visible from the road, in a beautiful bedrock gorge...I wiped my eyes, "was this for real"?  In my typical fashion I tried not to let my expectations get too high for fear of letdown.

The put-in is a cherry little spot where you can park about 10 steps from the creek.  We waved goodbye to our Inflatable Kayaker Shuttle Driver who elected not to paddle the run with us due to time crunch.  Due to the time crunch, I didn't get many pictures either, but here they are, blurry ones and all.  Damon bounces through Roxy's Rock 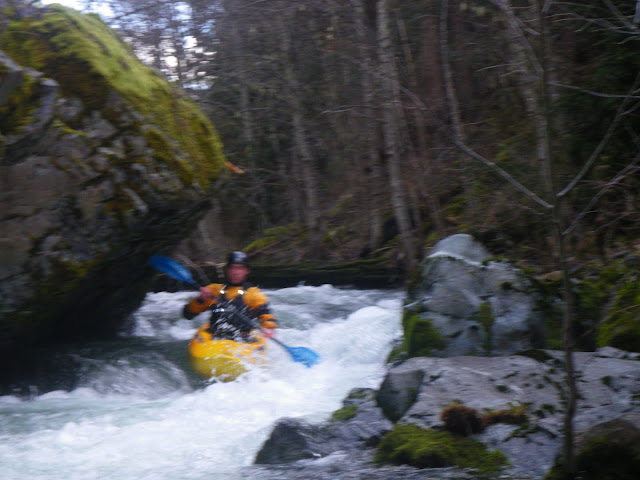 The run continues along with good gradient and lots of bedrock.  Eventually you reach the obvious gorge portage.  The eddy above this is rumored to be extremely difficult to catch at certain flows, but with our scratchy level was no problem.  This gorged in rapid is literally so boxed in that its difficult to get a really good scout at it.  I basically traversed the entire portage route along the left gorge wall and was unable to get a good look.  Be careful if you portage as it is a little exposed up there.
The rapid is a split drop around a rock that would make for juicy hydraulics if you came at it with high water.  There is also nowhere to set safety from, so even though its not a bad drop, treat it with respect.  Looking down the left slot. 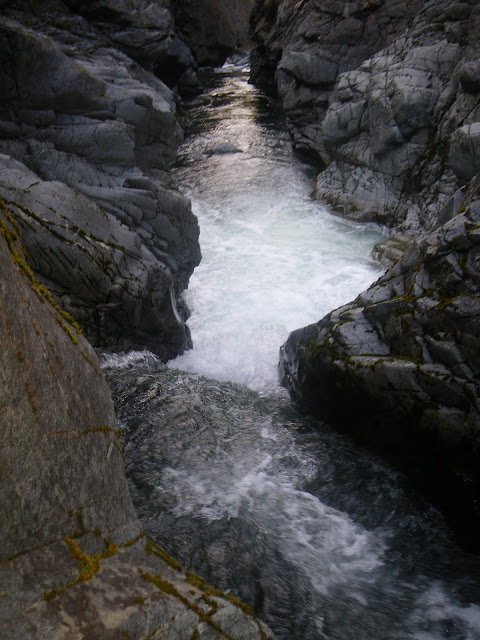 I was able to climb up onto the gorge wall and take this shot.  You can't see the entrance rapid from this angle, but there is one.  At our flow we ran the left slot because the river right was too tight.  At higher water I bet the river right channel would make a sweet boof and be the preferred line. 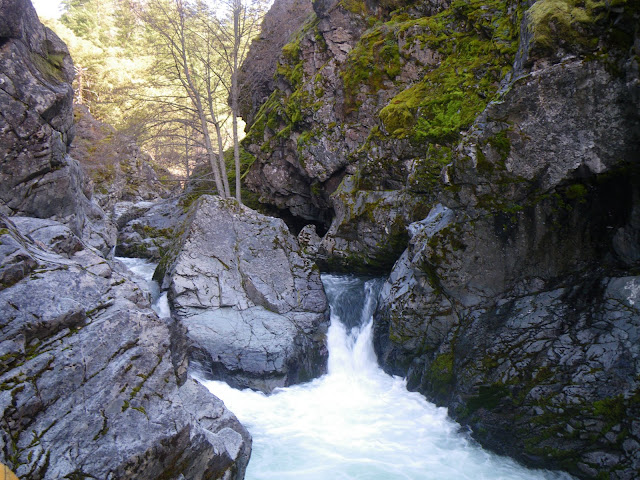 Downstream was one more extremely tight boulder slot that could've used more water.  We did a boof to gorilla to seal launch maneuver, as always: scout when in doubt.  After this first gorge, the creek opened up again until we arrived at this sweet drop.  Well, it kinda landed on a rock shelf, but as long as you stick your boof it's good to go.  Damon Goodman sticks his signature Goodboof. 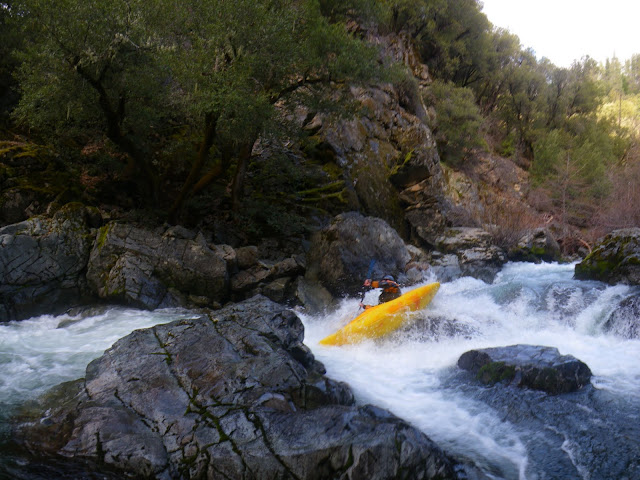 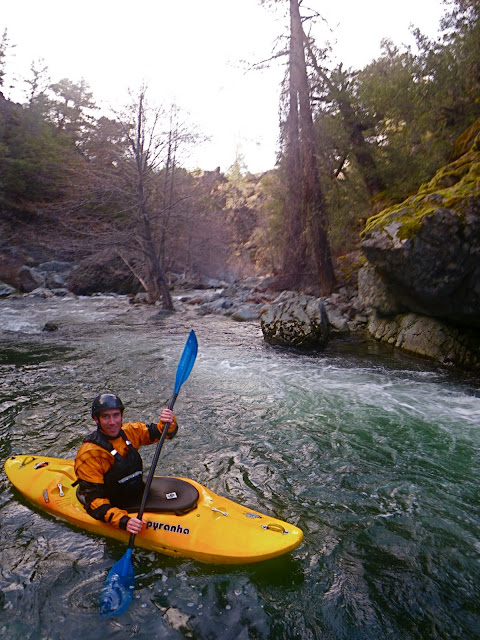 Finally, we arrived at Fishladder Falls.  And who was waiting for us, but our I.K. buddy Aaron, all suited up and fired up!  We were stoked!  Rumor has it that this drop actually used to be a falls, but it was blasted to allow for fish passage.  I can only imagine how sweet of a drop this used to be, but hey it's still sweet.  When scouting this drop, I didn't notice any chucks of rebar, but you know its in there, so be careful.  Here is the sweet entrance boof preceding the fishladder. 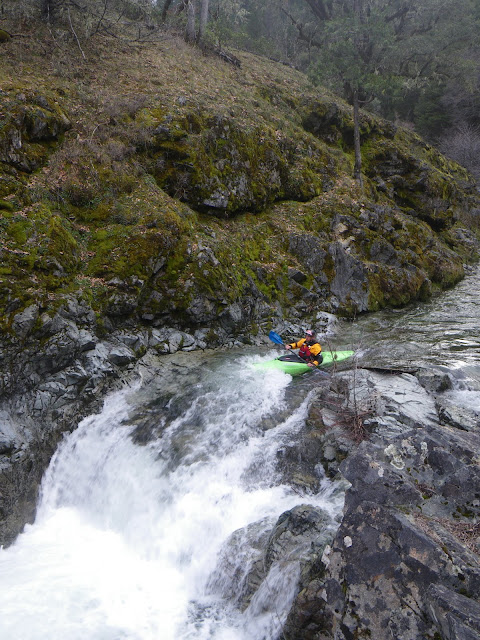 Aaron watched Damon and I grease the line, and with the look in his eye, jumped into the I.K. 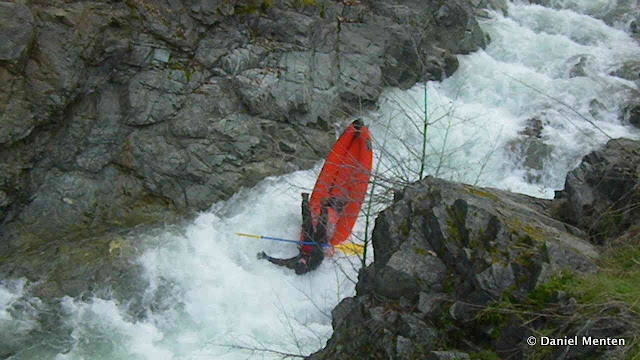 Aaron charged through the first two holes, the third one he got sideways and was fine, but when he turned around backwards in the fourth drop, the boat was completely full of water.  Fishbone then performed a backwards piton, shedding the water and him from the rocketing I.K.  He then performed the inverted running man maneuver with true grace, as he swam the run out to the drop.

The take-out is less than a mile downstream, where you can also park within steps of the creek, just a little ways upstream from the bridge another small road goes right to the water.

Final Notes:
1) We paddled this one last spring as an after work run from Weaverville, though we did cut out of work a little early that day(3ish).
2) The flow was 1,600 cfs. at Hyampom, and though it was enough water to get down the run, I personally would prefer 2,000+ to juice up the hydraulics and pad things out.  I realize this is just my personal preference, and somebody else may find it enjoyable with lower flows, it was definitely not a stressful run.
3) I think the 3rd portage in the Holbek/Stanley book is the panoramic shot, but it could've been the one where Damon is bouncing over the rock.  We may never know.
4) The Fishladder drop is truly park n huckable, with an easy trail leading back to the top, and was actually really good at the lower level because its so channelized.  Next time I'm there and its a little bony, I'll just run the fishladder a few times and call it good...it was the best drop anyway.
5) This run belongs on the top list of Bike shuttles.
6) When this creek is flowing good I bet its a real kick in the pants the whole way.
Posted by Daniel Menten at 4:09 PM