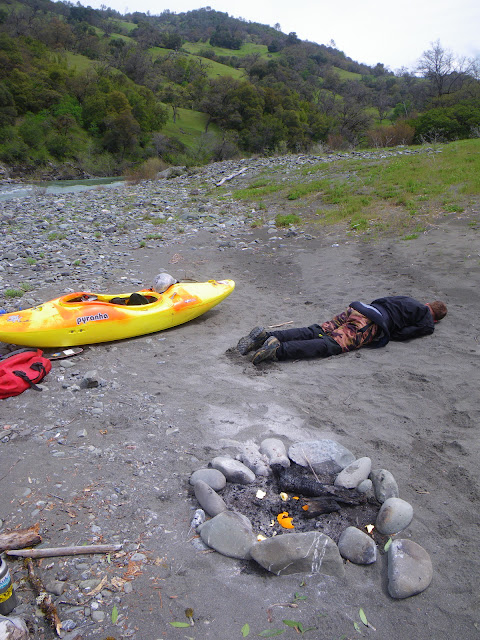 We awoke to an early sunrise and had a relaxing morning before disembarking from camp.  It was a warm night, and we awoke without even dew on our sleeping bags.  I reckon we camped somewhere about the Round Valley Indian Reservation, as we were now also in Mendocino County.  During the leisurely morning, we spotted a bear descending the hillside across from our camp to a spot where vultures were circling.  Cowpies littered the grassy flat where we camped and some were decorated with these funny looking mushrooms... 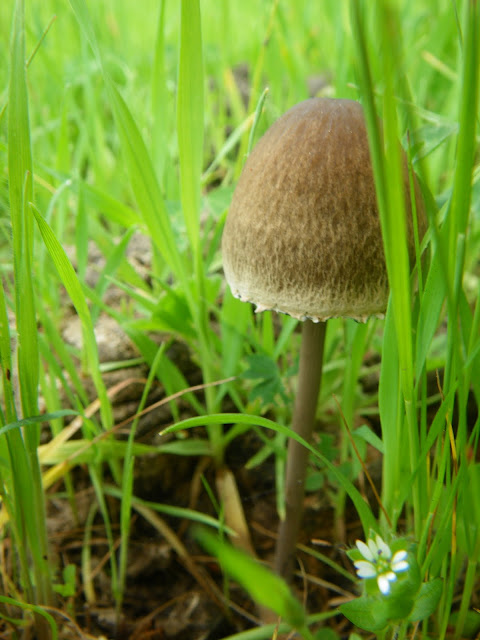 The next 6 miles to the Mina Road Bridge were fun class III, and though the flows had dropped a little they weren't significantly lower.  It felt good to get back on the water. 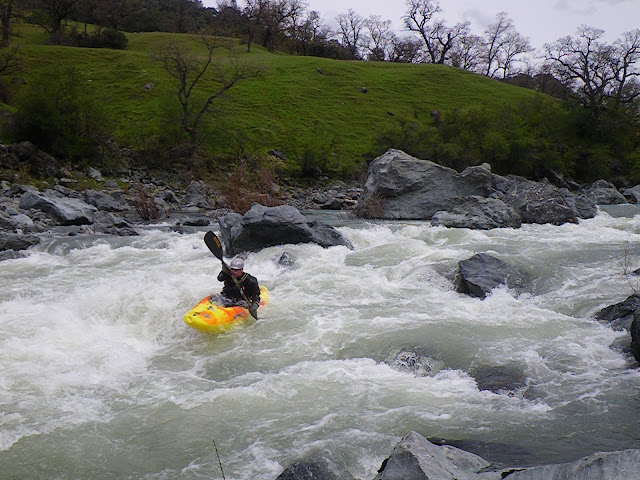 One of the highlights was the Rainbow Wall, a chert formation unlike any other rock and undoubtedly the most colorful rock I've ever seen.  We took a break here to admire the monolithic masterpiece. 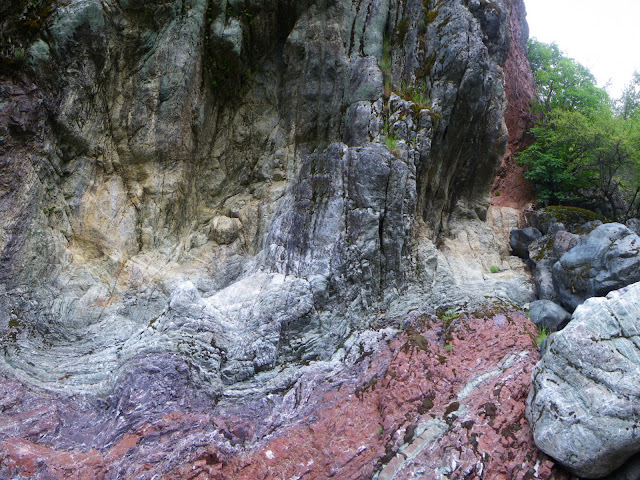 We paddled underneath the bridge, and into the undescribed Split Rock section.  For a class III-IV paddler, a two-day trip to Mina Road Bridge would make an excellent run with an easy shuttle, but continuing downstream definitely puts you into a committing class V section for several miles as the North Fork descends to its confluence with the main Eel. 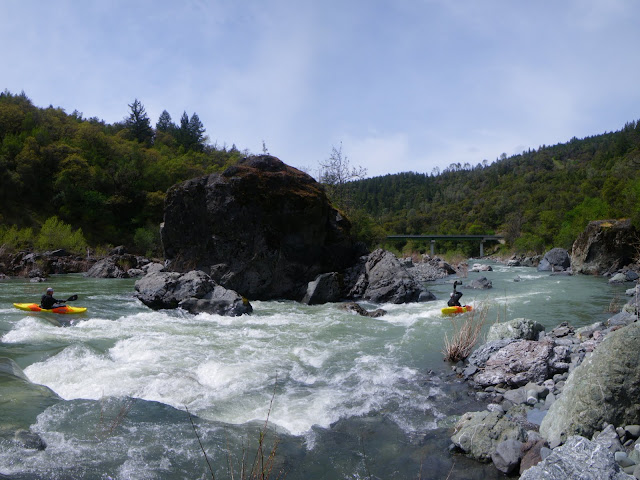 Split Rock was first descended by a group containing Bill Cross, and the only information we were able to gather regarding the section was that it "wasn't worth doing ever again", and "it wasn't that bad", but the group did a long one-day descent, taking out all the way down in Alderpoint.  This didn't leave us much to go with, and after scoping the river on Google Earth, I thought it looked bad-ass.  So as we paddled downstream from Mina Road, our mood was optimistic and cautious.  The old Mina Road Bridge eerily awaited us around the first bend. 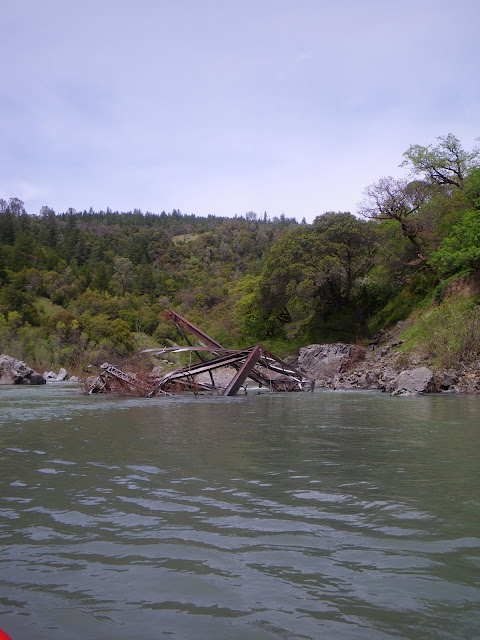 After a couple of easy miles we reached a pair of rapids that dropped us toward the gorge, where the river takes a 90 degree left hand bend. 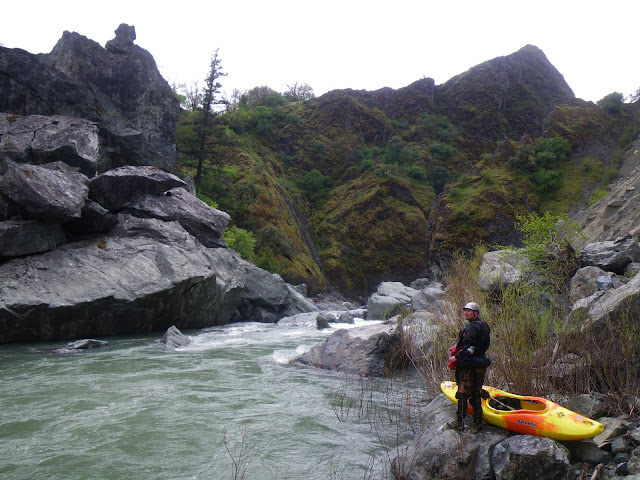 One more boat-scoutable rapid brought us to the crux of the gorge where we elected to carry a stout class V+ drop.  The portage was across a fresh, and loose landslide and was less than relaxing to say the least. 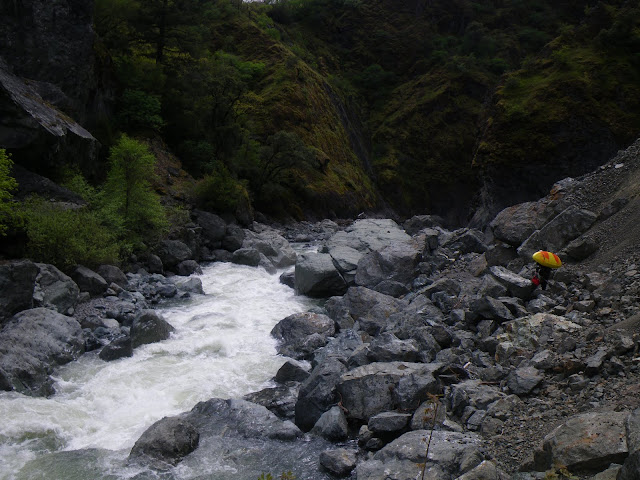 From here we had to ferry across the river to get a scout at the next rapid, and get a view downstream around the bend.

Stoked to find that the next two drops had good lines, Warner proceeded to fire them up. 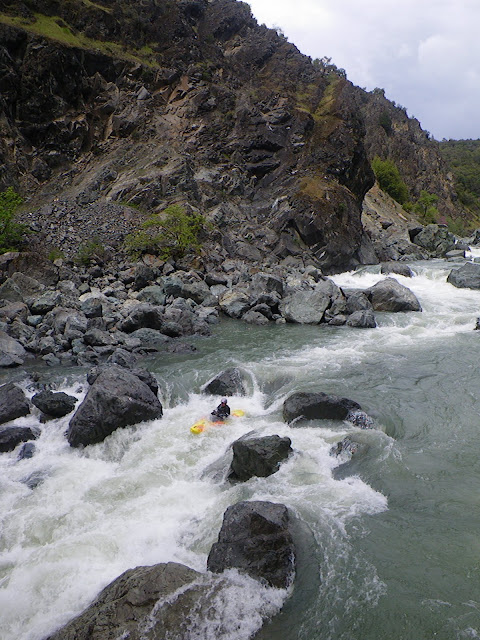 Before we left the canyon, it was time for a lunch break.  Chilling in the gorge was a powerful experience, and just as we were leaving a mist-storm blew down the canyon. 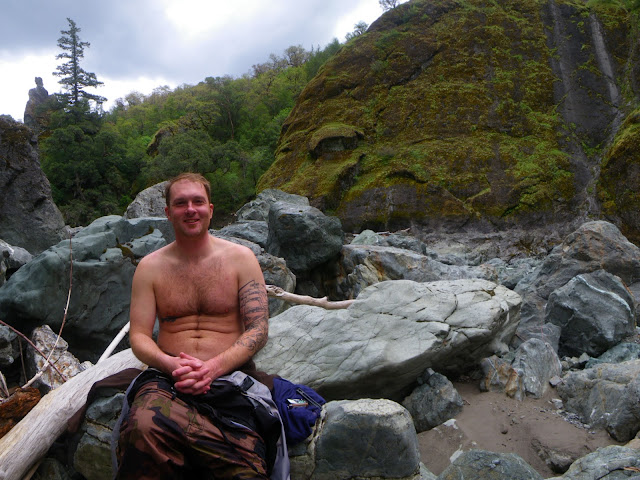 The rain was visibly falling, but seemed to be evaporating before even reaching the ground...before we knew it the sun came out and the fun rapids continued. 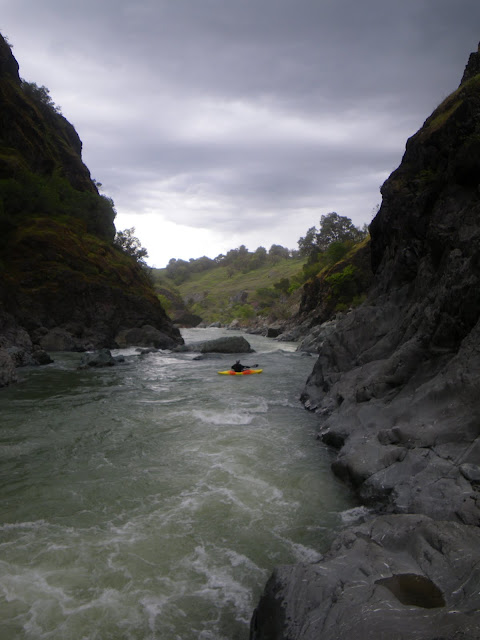 Looking Back up at Split Rock Canyon 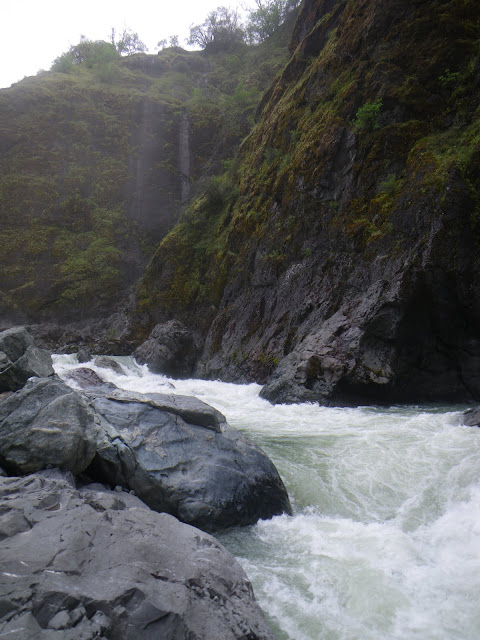 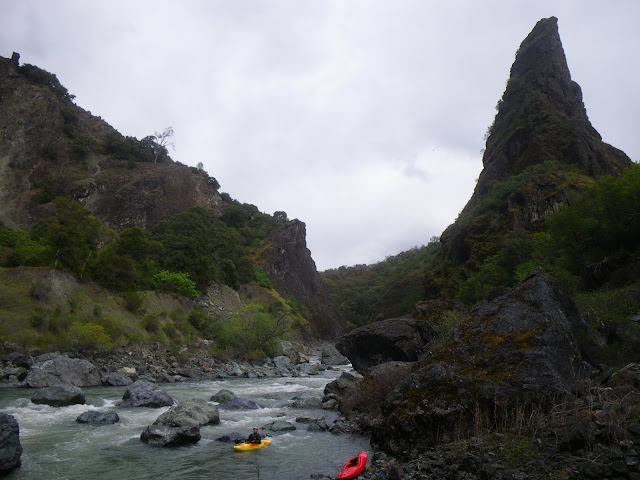 Downstream of Split Rock, the river eases for awhile, though fun rapids continue. 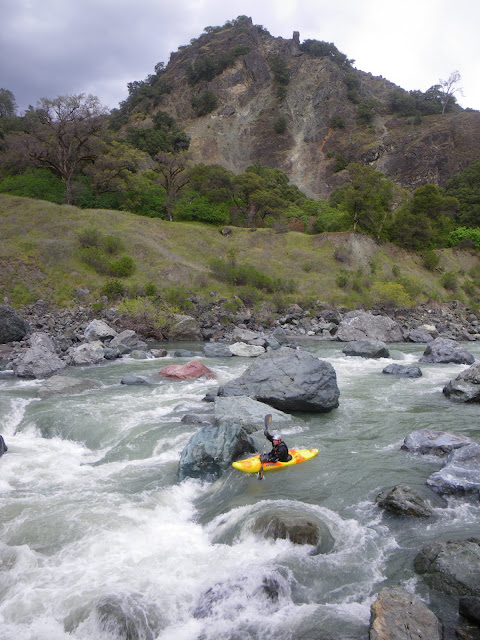 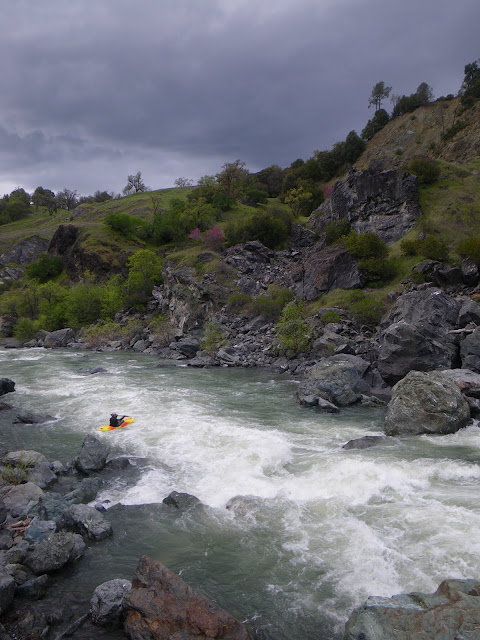 Eventually the river's character became more intimidating as the gradient steepened with many large boulders that made for difficult boat-scouting. 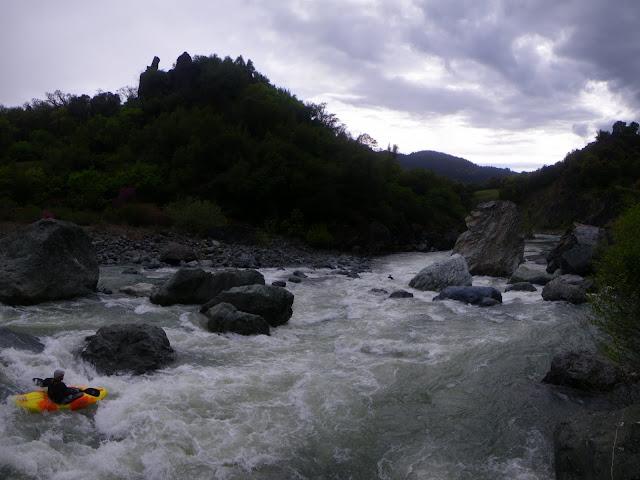 Being off-line wasn't an option as many places had hidden sieves and undercuts, some even clogged with wood.  We continued downstream and were able to run most of the whitewater, although it was slow going. 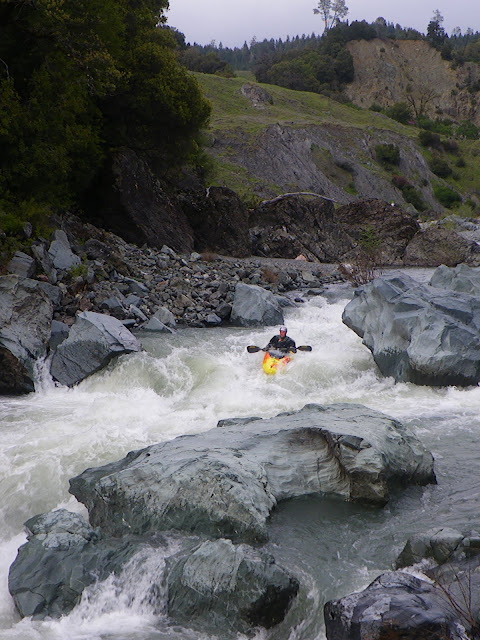 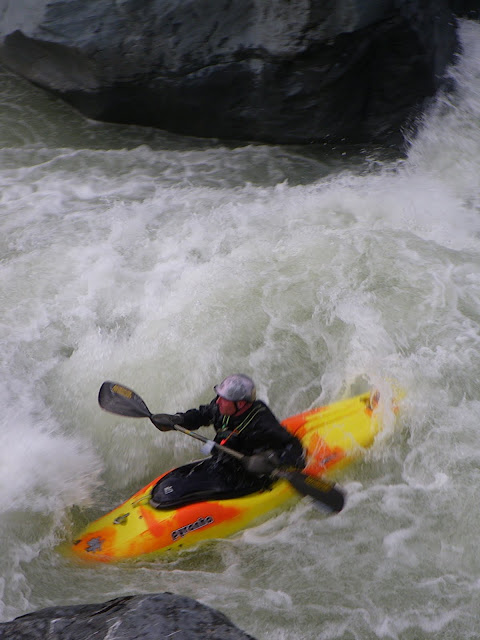 Two major portages came after a bit, one that we carried on the right, through a hole in the  rock and into a back channel pool of schmeg water. 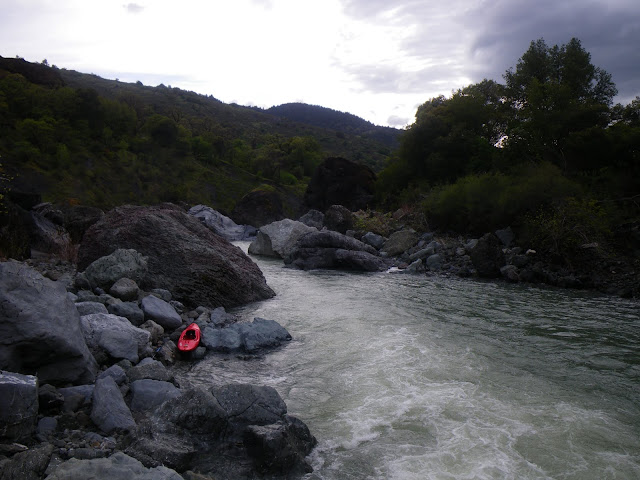 The second portage could have gone, but we chose to carry on the left, and after completing it, realized that the second half of the rapid was completely sieved out. 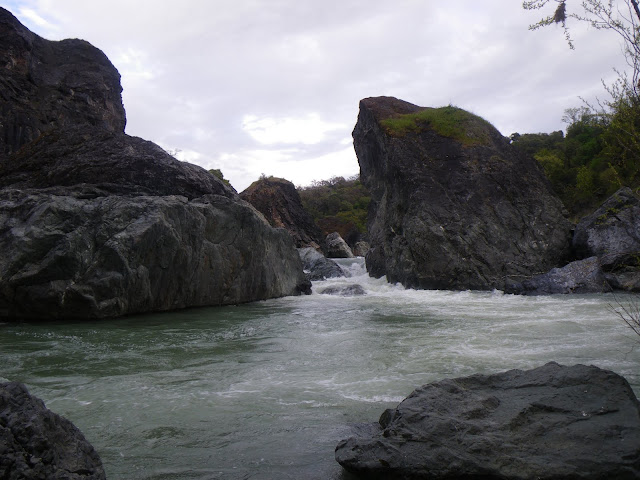 We then had to carry up and over a ridge, where simply portaging up and over on the right bank would've saved the time and energy...these are the types of problems that arise due to the lack of visibility between large boulders. 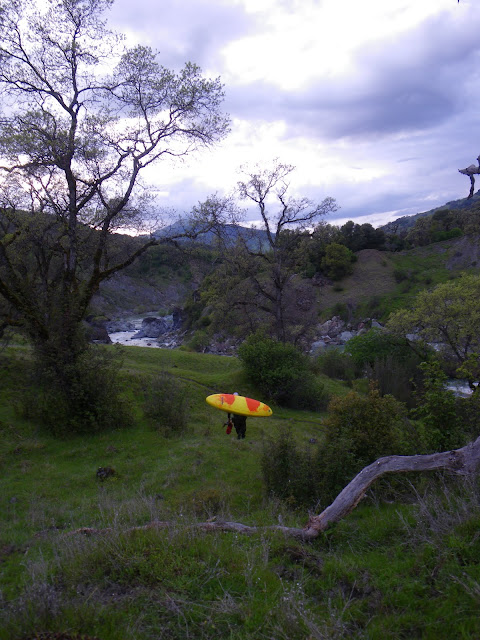 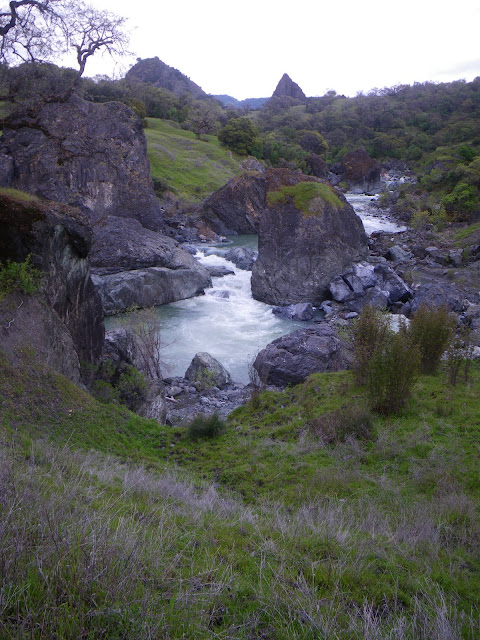 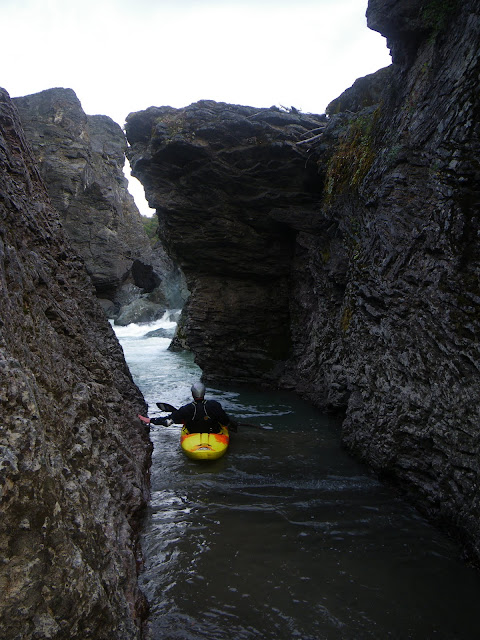 All of the scouting and portaging had burned up quite a bit of our daylight hours, and exhaustion led me to suggest looking for a campspot, even though we had hoped to make the main Eel confluence.  After charging through a sweet drop, we got fired up that we might be close, but then reached another gradient section and decided to call it a day.  We were able to take a sweet hike and scope out the "Breakfast Rapids" for our final day on the water and a sweet sunset. 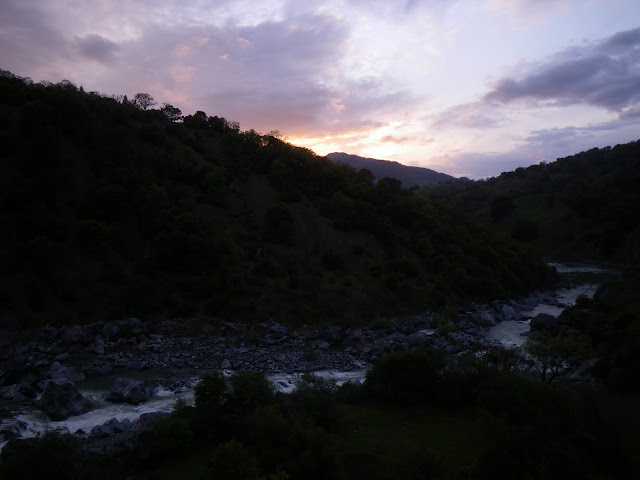 Posted by Daniel Menten at 7:22 PM