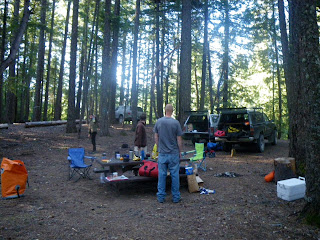 We camped at Hammerhorn Lake again, chowing down on food and going to bed early.  The plan was to have a crew run shuttle, whilst a couple of people stayed behind at camp to cook breakfast burritos and to make burritos for the river trip.  The shuttle is incredibly long, so after nearly two hours, we returned to camp and hurried our breakfast along.  Minutes later, the crew was tracking our way back down into the canyon, arriving at our boats close to 10:30.  Mike had come down with a cold and elected to carry his boat back to the road.  We were all bummed to be losing a member of the crew, but given his condition he made the right decision.  As we would later learn from Warner, it was a nasty cold indeed!  Here is Ed running the second breakfast rapid. 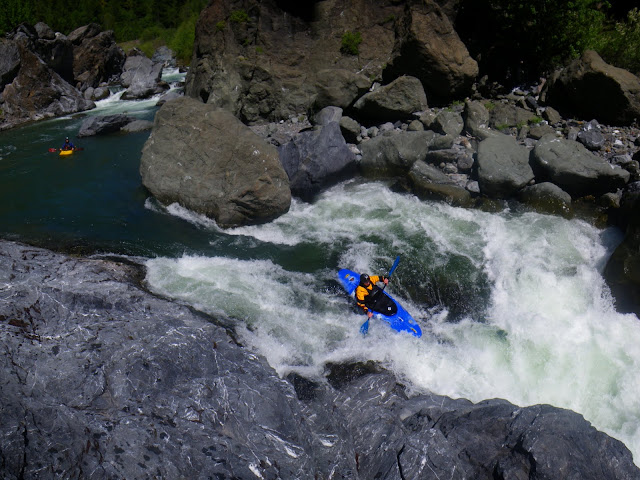 Here is the view Downstream 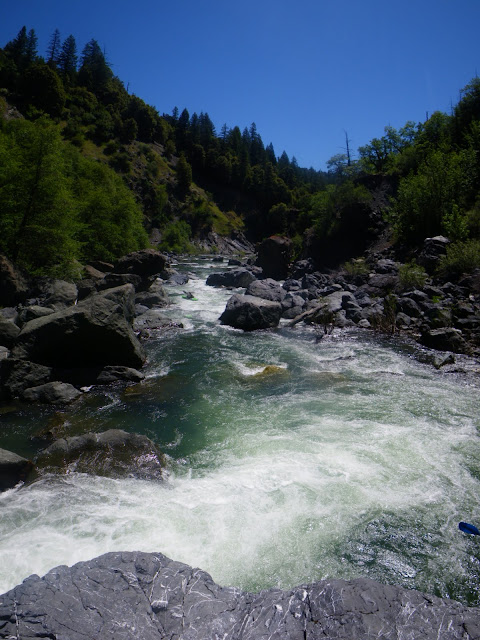 Immediately we dropped into a great section of continuous rapids with more water than the previous day.  The first two miles of the day would drop 125 and 215 feet respectively so we were expecting lots of action.  As on day one, we were able to boat scout 90% of the rapids that turned out to be cleaner and more fun as we went.  Unfortunately, John boat-scouted a drop blind, landing on a sharp rooster tail-rock that cracked his boat under the seat.  Investigating the crack. 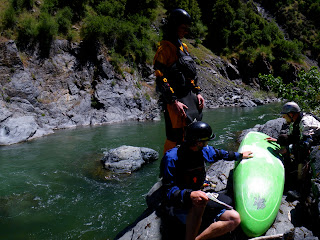 With a foam patch cut from his pillar wedged between the crack and seat, we charged onward through more fun drops. 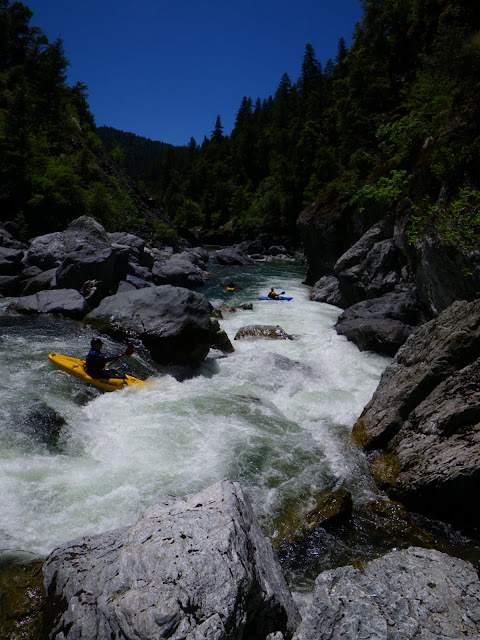 It seemed that we had a near perfect flow. 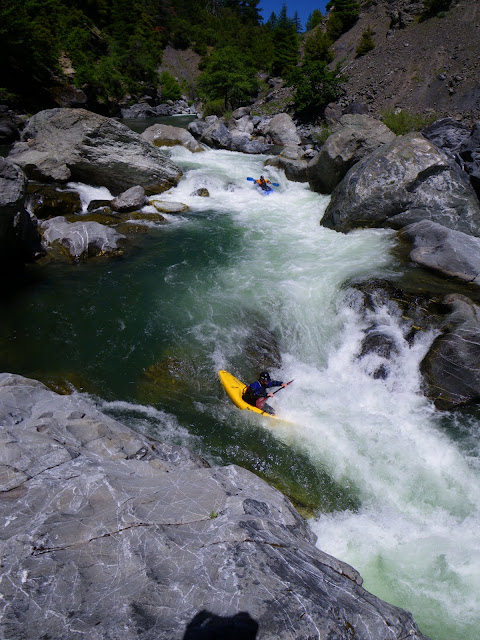 Another Rapid I scouted with a nasty piton rock, the crew wasn't convinced with my suggested line after Warner had a near brush with the rock here. 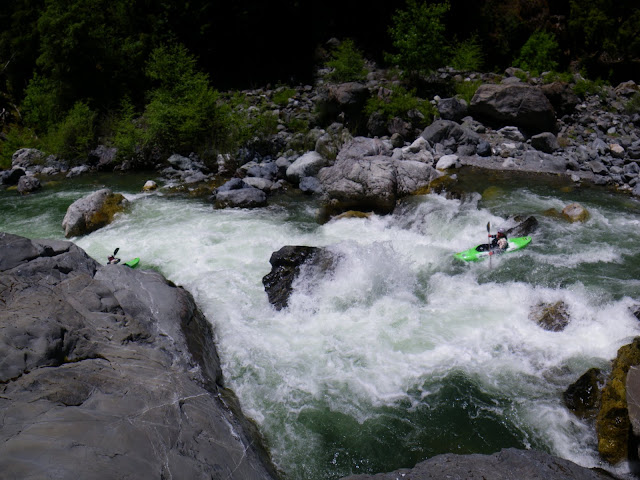 We had gone less than two miles and already we were stoked on the pace of the run. 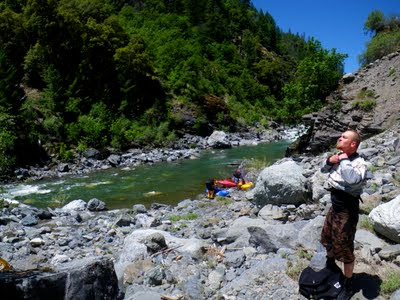 A Bummed Warner
But the crack in Warner's boat had gotten worse. He was able to continue to the end of the second mile, at Beaver Creek.  It was here that John wisely elected to hike out, the river was still close to the road, and 10 more miles remained with another steep section through the "Osbourne Roughs" that dropped 111 and 242 feet in one two-mile stretch.  We made sure he drank lots of water, because it was getting damn hot.  His hike out is a different story though, as our crew of 5 became 3. 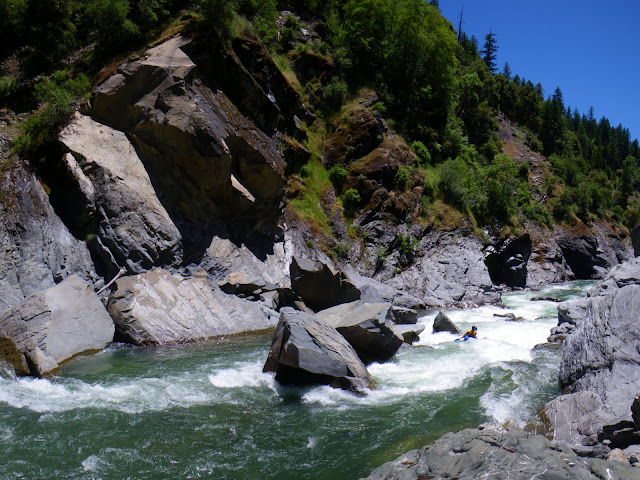 Onward we charged as two miles of relaxed whitewater with several spicy drops peppered in brought us to the confluence of Howard Creek, the beginning of the steepest gradient.  It was here that we took a lunch break, mowing down burritos and hydrating with an abundance of water.

The weather was 90 degrees, helping snowmelt to hold the river flow.  Numerous tributary accretions had swollen the river to a healthy 800 cfs by this point, making for some powerful hydraulics and interesting seams.  Despite our expectations of deathtraps and a menacing character however, the run remained incredibly fun and beautiful. 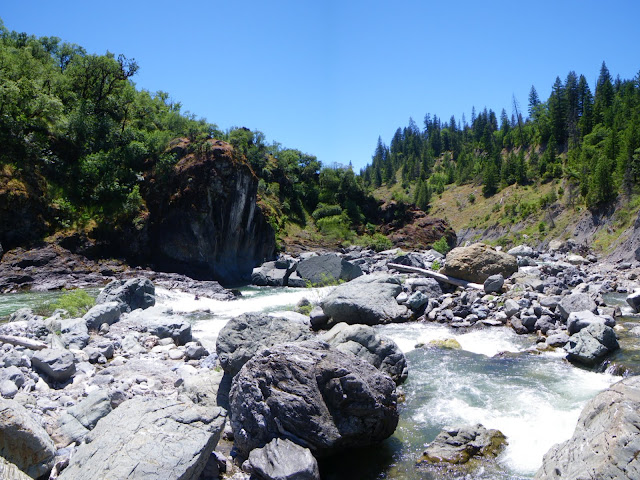 After lunch, the river's gradient slowly began to increase again.  A little slow on the trigger finger 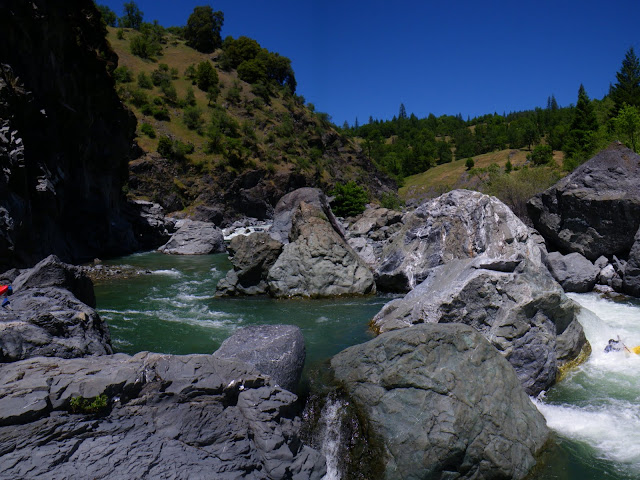 Eventually we reached the Osbourne Roughs, a steep and continuous boulder garden section very reminiscent of the final 9 of the Middle Kings, or Golden Gate on the South Fork of the American. 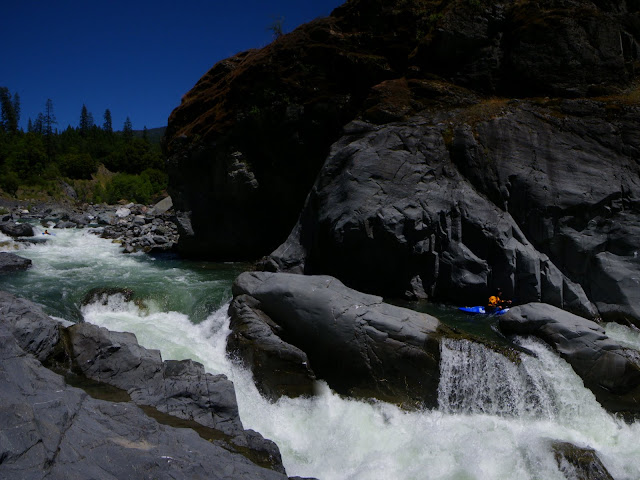 The difference was the type of rock, as there was absolutely no granite to be seen.  Instead, we encountered house-sized boulders of Chert, Schist, Gneiss, and Mudstones intermingled with the predominant sandstone bedrock on river left.  Orion charging towards the steepest part of the run 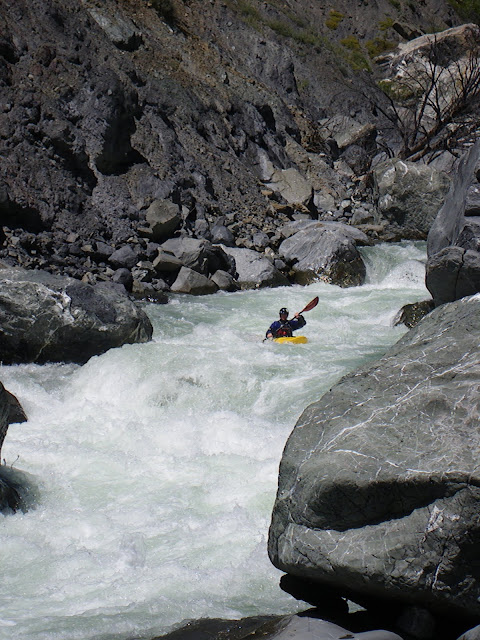 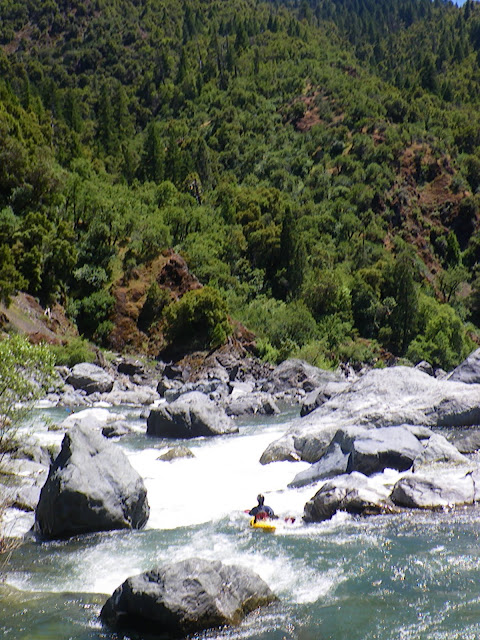 Ed in the next boulder garden 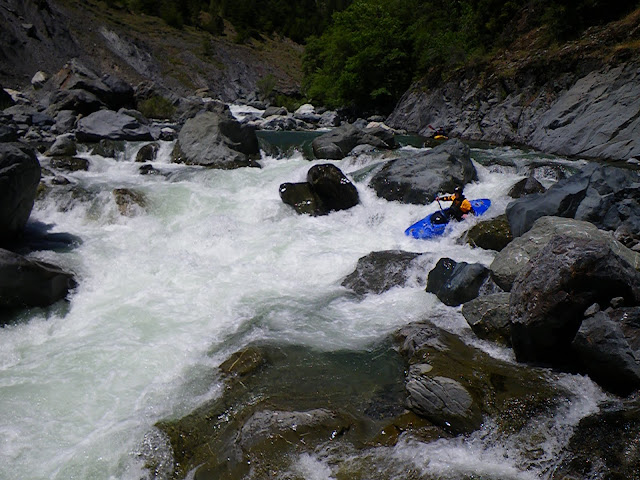 There were nasty hazards to be avoided but fun boulder garden rapids continued one after another until we reached the crux of the gorge: Steelhead Falls. 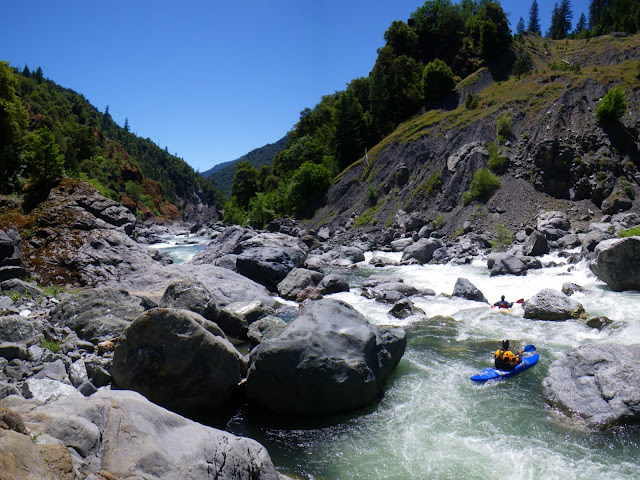 We were officially in the crux of the run, and our healthy flows translated into meaty hydraulics.  Though we portaged twice in here, they are both the kind of rapids you want to go back for. 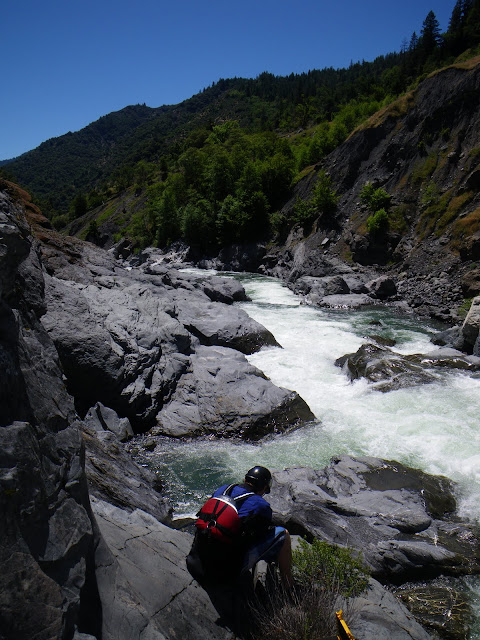 As we scouted this enormous drop, Steelhead were jumping up the various channels, smacking into rock and sometimes making it over the falls. 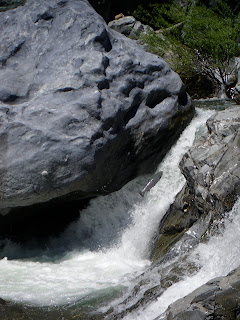 At this point the significance of paddling on the Middle Eel occurred to me, not only were we experiencing a true adventure, but life in its fullest.  A healthy salmon stream is not widely encountered while paddling these days, in many ways our journey reflects the travels of these fish, bumping our heads into rock over and over before we get a chance to spawn.  The portage was mellow on the left, and downstream another huge, yet runnable rapid was portaged left as well. 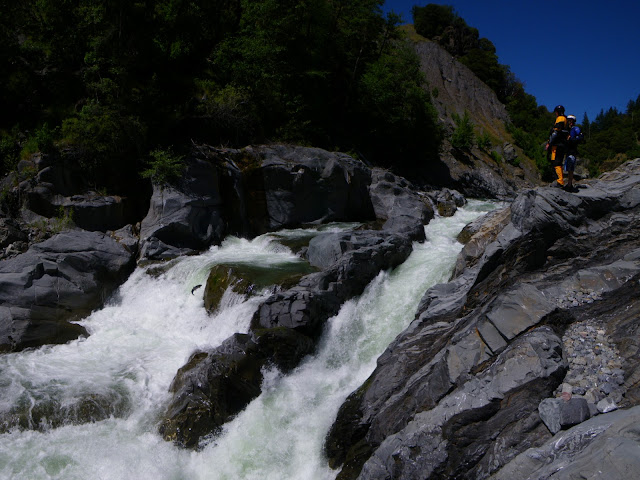 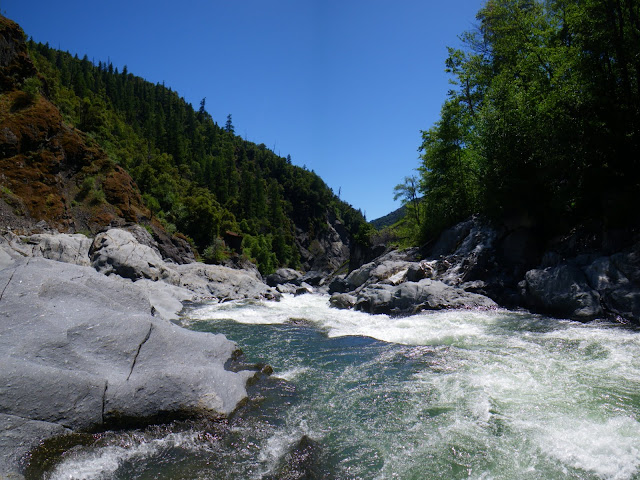 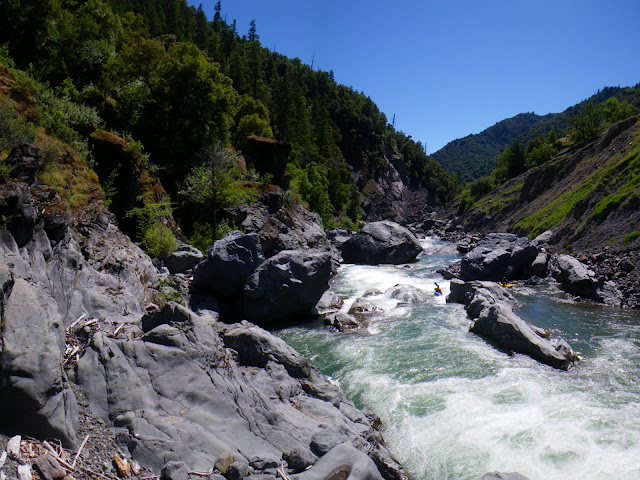 Some truly beautiful whitewater in here 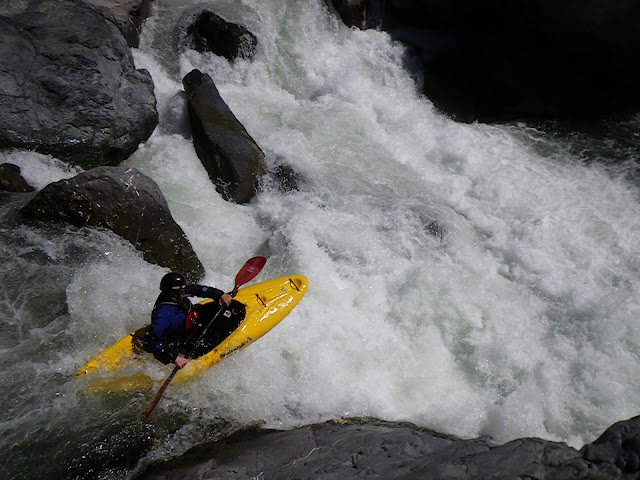 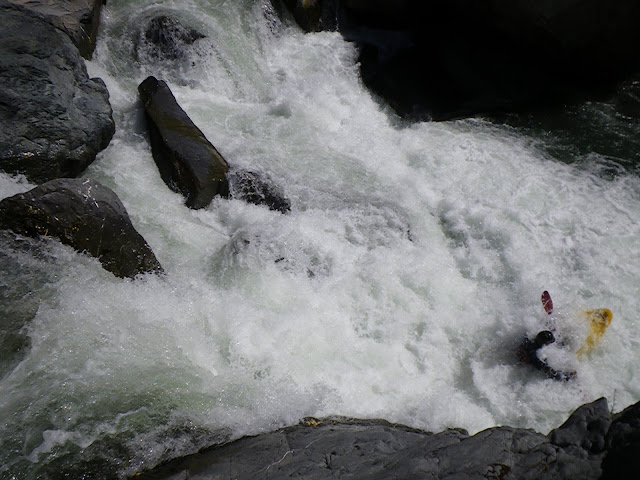 And suddenly, the Middle Eel hits flatwater, the perfect time for a break in the shade. 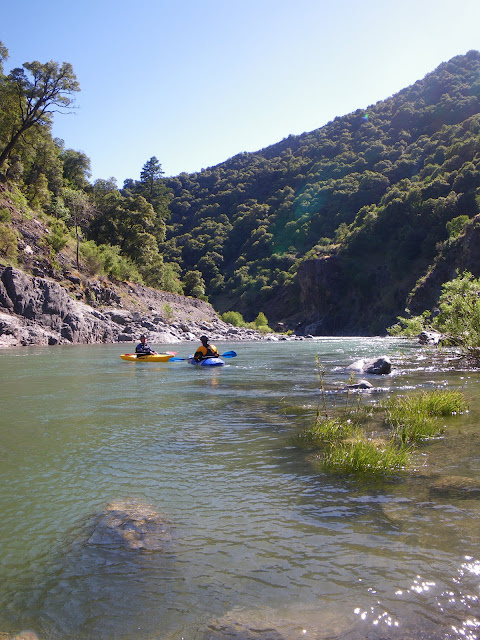 After rounding a corner and charging through a sweet rapid, I recognized it as the one visible from the Recon section weeks before.  The final gorge of familiar whitewater went quickly, arriving at the Black Butte Confluence at 5:00 pm after another long day on the water.  Miguel was waiting for us at take-out, but Warner was not, so we proceeded to drive back up the road for our lost buddy.  We found him, riding in the back of a jeep with two friendly ladies, having a great time.
The Middle Fork exceeded all of our expectations and is a classic stretch of California whitewater that deserves to be on any class IV-V paddler’s list.  The amazingly forgiving river, quality whitewater and spectacular scenery and solitude make for one of the best rivers I’ve ever paddled.  Friendly locals greeted us as we arrived at the take-out, as well as a giant rattlesnake. 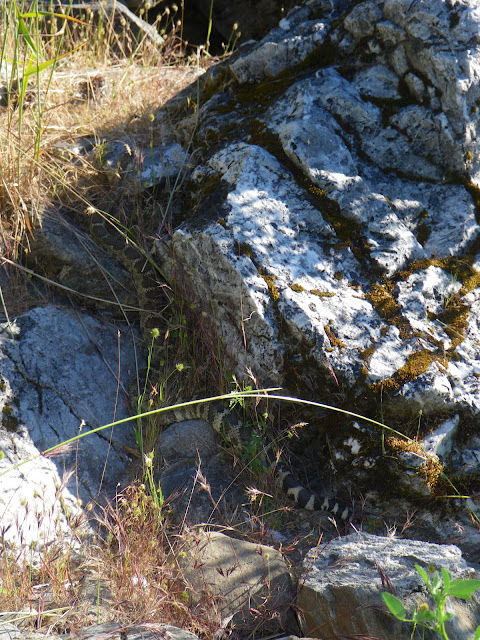 Rattlesnakes inhabit the area, so I brought a snake-kit before our trip.  Some of the unique rocks were slippery (soapstone) while others were incredibly sharp, so good footwear is highly recommended.  Sunscreen and a water filter were nice too.  Additionally, the Black Butte River Ranch Store will run shuttles for both sections of the Middle Eel if you arrange it with them, phone # (707) 983-9438.  They also have Yolla-Bolly wilderness maps and cold beers at take-out (or put-in).  The Forest Service office was helpful in assisting us with access information as well, the Covelo Ranger Station # is (707) 983-6110.  We had flows around 1,600 at Dos Rios.  Go out and enjoy some wilderness paddling in one of the most remote areas of California and the West Coast.
Posted by Daniel Menten at 5:20 PM