In order to keep our momentum and take advantage of another wet storm the Explore Six Rivers Team decided to head south and catch a spill from Van Arsdale Reservior.  For those of you unfamiliar with the Upper Eel River, check out The Friends of the Eel River Website.  They also have a great link with info about the Potter Valley Project and its ecological effects, forming a total barrier for imperiled Salmon populations that historically spawned in the Tributaries above Lake Pillsbury.


Van Arsdale Reservior is created by Cape Horn Dam and is the second of two dams on the Eel.  The first is Scott Dam, forming Lake Pillsury.  Both of these dams are a part of the Potter Valley Project, owned and operated by PG+E which is the second largest water diversion we will encounter on our Six Rivers Expedition behind the Trinity River.  I don't think they produce power at Lake Pillsbury and it functions primarily as a water storage for diversions to the Russian River watershed via. the
Potter Valley Project.
Because of the "need" to keep Lake Pillsbury full, and because of the unusually dry winter, this was only the third time this winter that a runnable flow level has passed Van Arsdale.  The last time we had checked the Eel River at Van Arsdale Gauge at put-in at 4 in the morning the river was about 1,500 cfs, although an extremely wet storm had just dropped up to 3" in some of the surrounding hills and the river quickly began to grow in volume.  By the time we arrived the flow was steadily increasing and it felt like way more than 1,500.  Turns out it was more like 3,000 cfs. 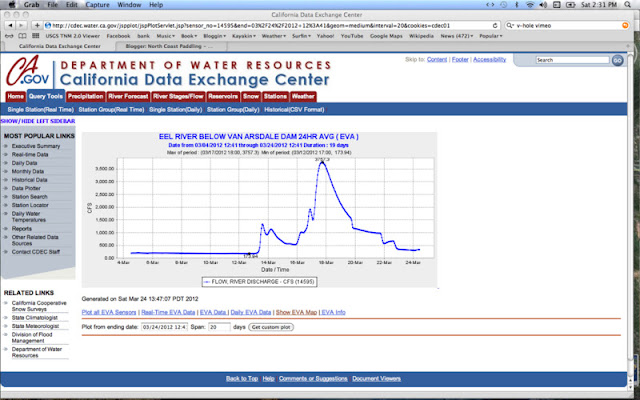 Because of the water diversions, during the summer only 5 cfs is passed down the Eel River beyond Van Arsdale.  The result is water too warm for native juvenile Salmon.  The unnaturally low flow has also resulted in many willows and alder trees growing into the riverbed.  To be honest, however, at our flow there were a couple of bad spots in the first couple miles downstream but then it cleaned up quite nicely.
I knew this would be a factor that could potentially hamper our downstream progress--we were hoping to paddle 37 miles all the way to Dos Rios at the Middle Fork Confluence.  As such we intended to leave town early meeting up at 5:00 am to accomplish our goal.  5:00 came and I was stoked to see Victoria and Matt all bright and shiny, Paul arrived and we began gathering our equipment.  Our buddy Wes, who is always down to boat and usually on it, was nowhere to be seen.  Upon calling we discovered he was still in bed.  No problem, we all made another round of coffee and hung out watching Paul's helmet cam footy from the Milk Drop on the Lower Mad River.  Before we knew it Wes arrived with Will in tow and we were loaded and on the way.  Victoria and Wes drove for what was guaranteed to be a long shuttle and a long day.  We met up at a gas station in south Eureka for Aztec Breakfast burritos, and Matt suddenly realized he had forgotten his drysuit and had to return to Arcata for it.  No problems, such has been the way of the six rivers expedition thus far...that's why we meet at 5, right? 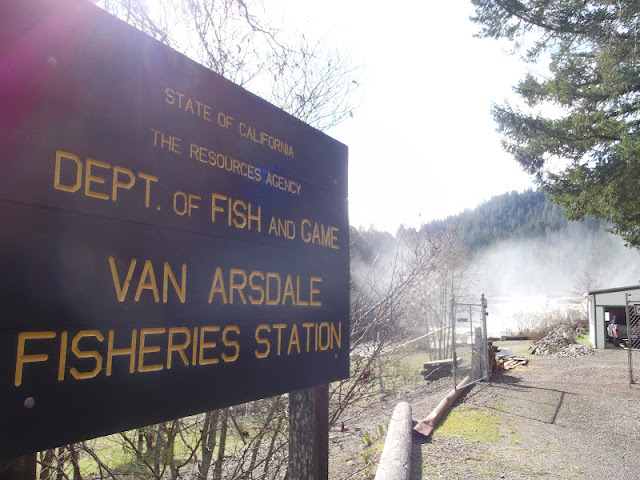 On our shuttle drive down to Dos Rios and back, we passed another group of floaters!  Honking our horn and waving we were stoked to see the first group of paddlers on the river since we had started out the Six Rivers Expedition.  After a beautiful, albeit long shuttle drive through Willits, up highway 20 and then through Potter Valley and over the pass to Van Arsdale we arrived at a nice and easy put-in below the almost-runnable dam.

Then we were off kayaking through the willow jungles of the Eel, the water was a silty blue and the clouds were parting to make for a beautiful day.  We charged downstream and found that the addition of tributaries caused the riverbed to clean up more quickly than we anticipated.  Before we knew it we were past the willowy stuff and enjoying some quality whitewater in a roadless canyon.


The geology was interesting sandstone bedrock mixed with some peridotite looking boulders and a nice forest lined the banks dominated by oak and grey pine.  A couple of large creeks came in from the right bank, adding to our level.  I was looking forward to the Tomki Creek confluence as I have never paddled it and figured it would contribute significantly to the flow.  Tomki added perhaps another 500 cfs and the recession lines on the sandy beaches downstream indicated that we were riding at perhaps the peak of the flow spike.  Downstream the Eel continued through a nice canyon with occasional class II and III rapids. 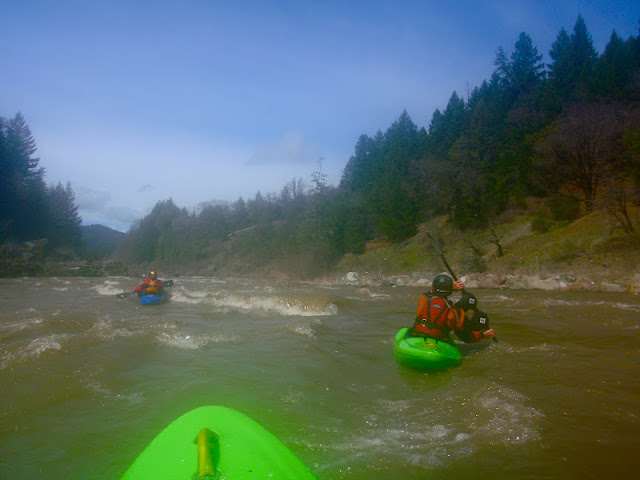 Eventually we arrived at one such rapid with a good boof that I crashed through.  The hole seemed a little sticky and I windmilled a few strokes to get through it.  Looking upstream I got to see Paul launch into it and get stuck, clocking a solid 25 second ride or more before he freed himself from the hole.  We were all laughing at the thought of Paul swimming in a class II.  Paul's Hole marked the beginning of an awesome section of continuous class II-III that continued for almost a mile. 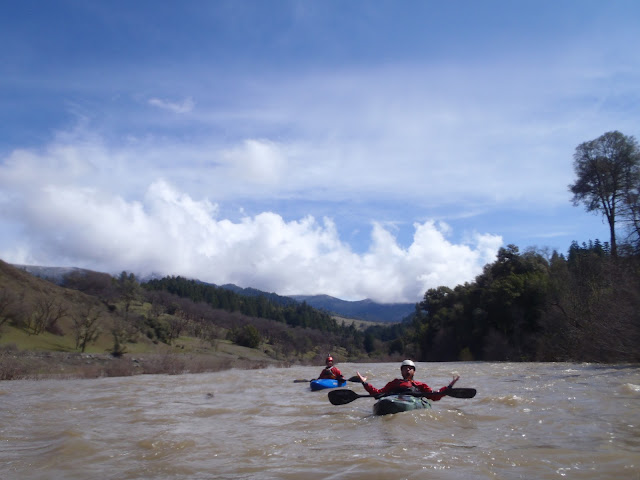 Making good time with the additional flow we played our way downstream with many great features and soon arrived at the beginning of the Hearst Valley.  After some brief Wiki-research, Hearst is named after the senator George Hearst, and doesn't seem to have any connection to the Hearst section of the McCloud River, though I could be wrong.  This was also formerly known as Travelers Home, and I can see why.  We were quickly floating through one of the most beautiful valley scenes I have witnessed complete with snowy mountain scenery courtesy of Sanhedrin Mountain.

Before long we were passing the bridge and entering the 18 mile Hearst section of the Eel.  I was excited to paddle this section with high hopes for a potential addition to my guidebook-in-progress.    We passed a house at the downstream end of Hearst with a whitewater kayak outside and were stoked it is a rarity in these parts.  At this point we had already covered 12 miles but still had another 25 to go.
No worries, though, the flows at Dos Rios were 12,000 and rising the last time we had checked so we figured our pace would continue to increase.  The Hearst section started with some fun drops and several playspots and our high spirited group continued to have a great time.  Suddenly the geology shifted to some very interesting bedrock that formed strange spires that seemed to erupt through the murky water.  It is some of the most unique and stunning scenery through which I have ever paddled and combined with the unforeseen sunny day (it was forecasted for rain and snow) the stoke level was high. 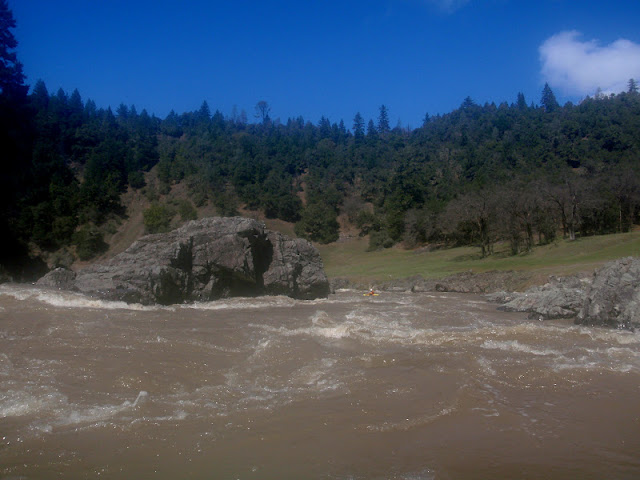 We passed one final property and mountainous view as we had quickly arrived to the notorious "Ramsing Corner" Rapid.  I told the crew the story about the crazy notorious landowner, Mr. Ramsing who used to yell at, and threaten to shoot, floaters who attempted to scout the rapid on his prop-er-tie along the right bank.  Right away we were giggling and decided to take a break in the sun for lunch. 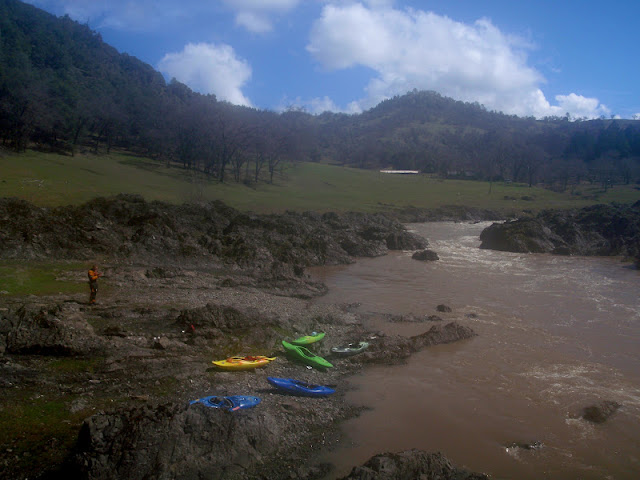 The river makes a 180-degree bend around Ramsing Corner
The Six Rivers Posse, on the rocks
Its amazing all of the places this mission has taken us so far and I have no regrets for paddling any of the "flatwater" sections of the northcoast that have escaped my attention to date.  We continued downstream through an awesome section of river that constricted through monstrous boulders in an awesome class II stretch reminiscent of my childhood runs down 'Swirly Canyon' on the South Fork of the Payette River.  This was some quality river and the whole crew was in awe. 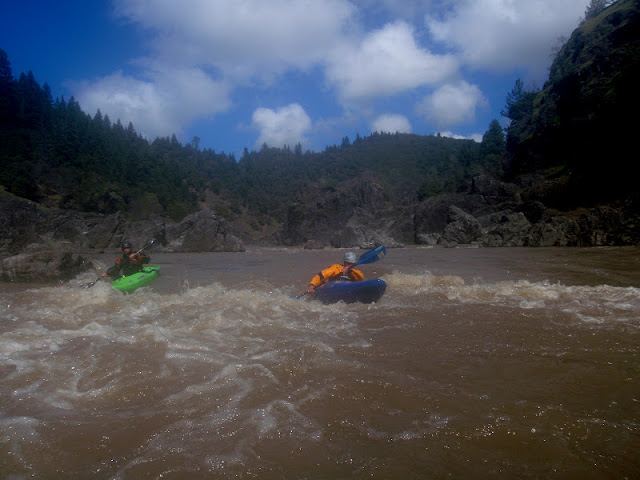 The river was quite large and we had covered many miles at this point, knowing that the Outlet Creek confluence must be getting close.
The abundance of play spots continued, here Paul shows you how they used to do it before cellphones. 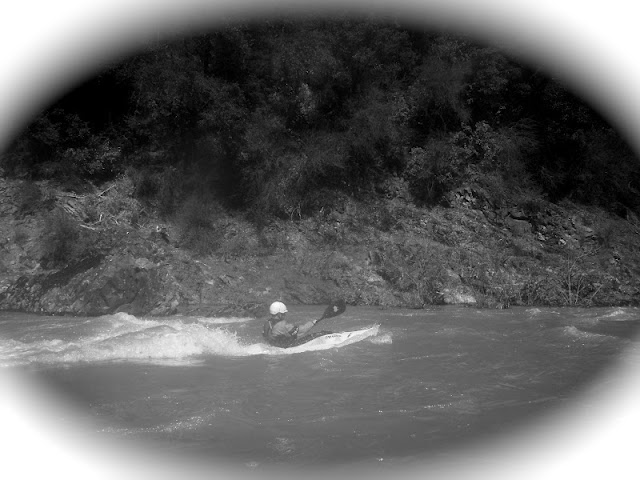 Eventually the pace slackened somewhat and we found ourselves paddling mellow water, though some more large tributaries continued to add flow and excellent play features appeared in nearly every class II rapid.  We took another quick break and before we knew it the river was speeding up again. 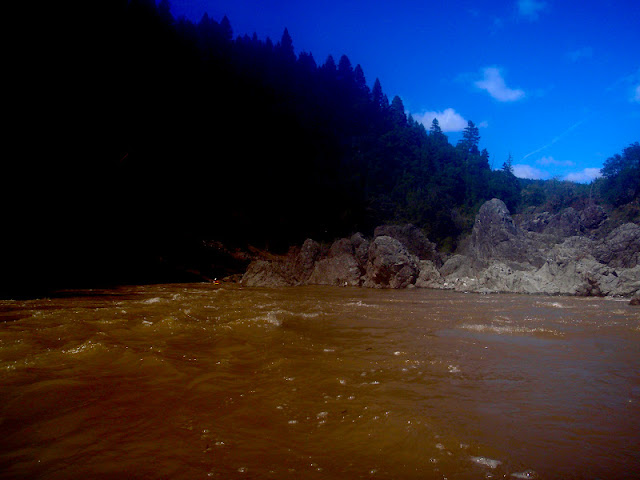 Victoria with her signature smile.
Time on the Water
Then we arrived at The V-Hole, an excellent training boof that I launched through, telling the crew it was good to go...because it is.  All the boys, including myself, had to paddle hard to escape the backwash after we boofed it, because it was a sticky hole.  Then we waited for a minute because Victoria happened to be in the back of the crew for once.  We gave her the boof signal and she approached it full steam ahead.  This was really funny because merely miles upstream Victoria was quoted asking "what's the difference between a wave and a hole".  Sorry V, I guess sometimes you learn the hard way (with Paul G and his helmet cam directly next to you) 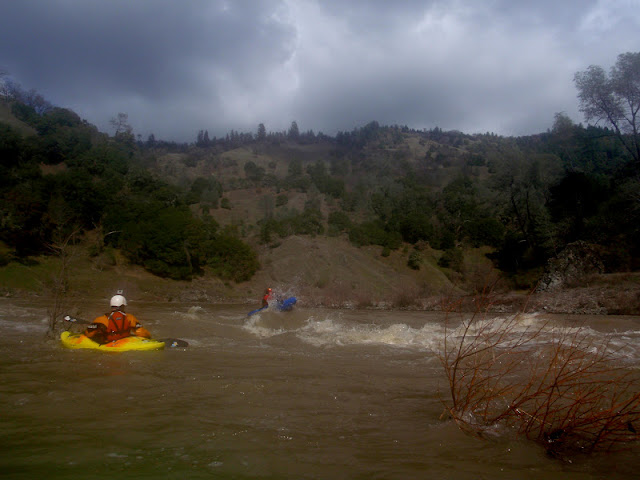 Then we came around the corner to see the Highway 162 bridge, and the aforementioned crew of paddlers taking out, it was our first real paddler sighting yet.  They turned out to be the folks with the kayak we saw, who live in Hearst and paddle the section with regularity.  After parting ways we paddled downstream to the confluence with Outlet Creek.
Clarification, Outlet Creek drains Willits...the Outlet Creek Run is actually on the Main Eel, starting at the confluence with Outlet Creek and continuing to the Middle Fork Eel confluence.  Outlet Creek can also be paddled but is referred to as "Outlet Creek Proper".  Confused yet?  Don't blame me it's the old-schoolers fault, but if you live in Willits and say lets go paddle "Outlet tomorrow", the chances are you're referring to the Main Eel below the Outlet Creek confluence.  Reason Why?  Its awesome!

I tried to get some friends of mine to help with our shuttle attempting to bait them with "you can paddle laps of the Outlet Creek run while we do our 'mission' thing".  I kinda felt that guilt that you always feel when you ask a friend to help you with shuttle "but you could join us for your final lap", I said.  Several friends I talked to had never done this stretch and seemed generally uninterested.  I wonder what forces of the earth have caused the Eel to get such an overlooked and undesirable reputation and general disinterest.  Our crew, however, looked forward to this section as the cherry on top of our long day.  The first rapid down from the bridge continued into the sunshine and was one big = er.
Will and I, both having paddling roots in Idaho, felt right at home.  I may as well have been in Chair Creek Rapid on the Main Salmon River at 13,000 Cfs.  Then, what do you know it, there were some awesome playwaves too!
And some more great rapids led us to the dramatic Middle Fork Eel confluence where the river becomes immense.  At our triumphant take-out downstream we had checked off another 38 miles of the Eel.  While doing our shuttle a friendly local welcomed us into his home by the fire and we felt truly gifted to have experienced such a wonderful day of paddling on a river none of us had paddled or had a good idea of what to expect.  The whole run was great, the Hearst section was awesome and the Outlet Creek Run was "the best play run I've paddled in the Northcoast" --Will Parham.
Posted by Daniel Menten at 3:17 AM