One day after paddling the Upper Van Duzen, and checking off the first of our Six Rivers another round of heavy rain brought the water up big time.  I had a good nights rest listening to pouring drops and dreaming of river levels rising, and before I knew it we were loading up for another day on the water, not before we enjoyed our celebratory cupcakes lovingly made by our #1 Sponsor, Thanks Toni! 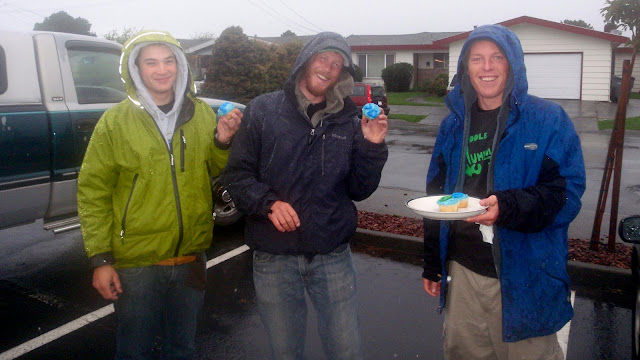 It was still dumping and the Mad River was close to the road in Blue Lake where we dropped a shuttle rig.  Driving up the Maple Creek Rd. we discussed this little known section I had avoided for fear of flat water.  In fact very few Humboldt paddlers make this run despite its proximity to town.  I assign the blame to the Dick Schwind Rating posted on the Dreamflows cross listing as Class I.  This lack of public knowledge culminated last March when an inexperienced and unprepared couple launched their tandem-touring kayak on this section and had to be airlifted out once they flipped and lost their boat in the first rapid. 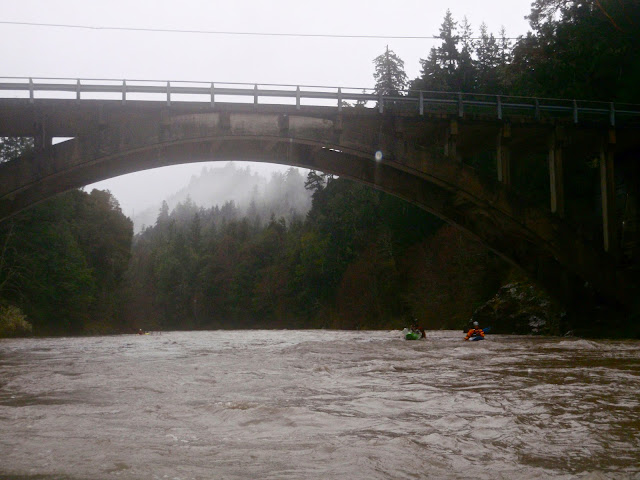 Wes had paddled the run before and described it as a very long day with two rapids, one a solid class IV and the other a portage.  We weren’t sure what it was all going to look like at 10,000 cfs or if the portage would have a line but we were excited to arrive at the Maple Creek Bridge nonetheless.  A local drove by, then looked at the river and came back to ask “you boys paddling that?” “Yes sir” we replied emphatically.  With the standard “you’re crazy,” we cheerily continued about our business of getting on the water, which was high and wide.  We were counting on the abundant flows to make for a shorter day and sure enough we were moving at a good clip.  The first several miles were all flat, but with good gradient and bedrock constrictions in places.  A post-trip gauge check revealed our flow to be 13,000 cfs at Arcata. 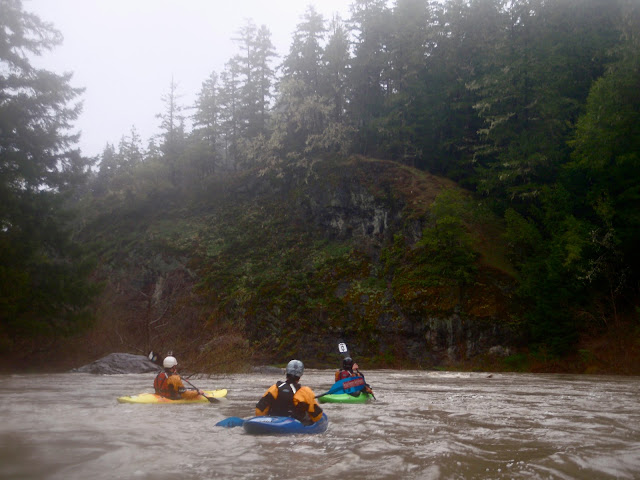 Suddenly we arrived to a fun playspot just upstream of a large cliff on river right, this marks the first rapid--Airlift.  This rapid was awesome, basically a ½-mile long wavetrain that started through a “gorge” then opened up into a big S-Turn.  Due to the bends and the sheer length of it we couldn’t really scout, but it was super fun big water and it all went anyways.  This rapid would be a long portage and at higher flows there aren’t portaging options so beginner boaters should stay away from this run at higher water above 5,000 at Arcata.  Here is Paul surfing the aforementioned playspot. 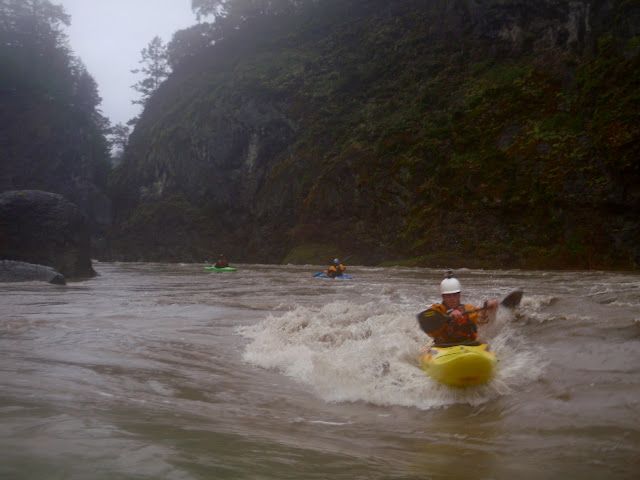 And the crew smiling below the s-bends, stoked to run some quality big water! 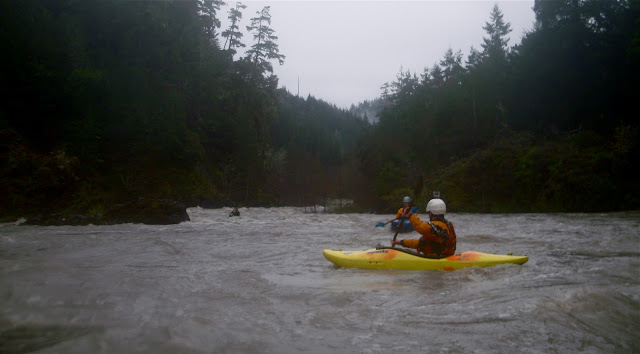 Based off Wes’ description the 2nd rapid was supposed to follow shortly thereafter, when it didn’t we started to wonder if we had also just routed through the portage.  After a good bit of flatwater Wes was starting to doubt his memory, “I think its still down here”.  After giving Wes a hard time we eventually arrived to this monstrous horizon line kicking spray in the air like a liquid donkey. 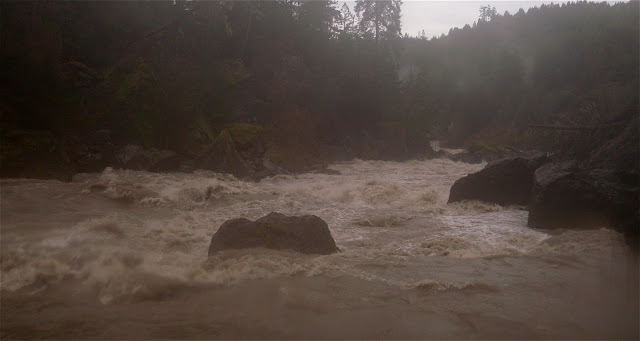 We eddied out and Wes then Paul immediately began portaging.  It was an intimidating and scary horizon indeed!  The whole river appeared to drop into a bus-sized hole with no line around it, before continuing for several hundred yards through a chaotic milky maelstrom.  I felt a need to take a closer look at the monster before I made my decision though so I jumped across the landslide, dodged a couple poison-oak bushes and found the scouting vantage.   My nerves tightened when I realized there was a line, and I was gonna have to paddle it.  A seam split the far right side of the top hole 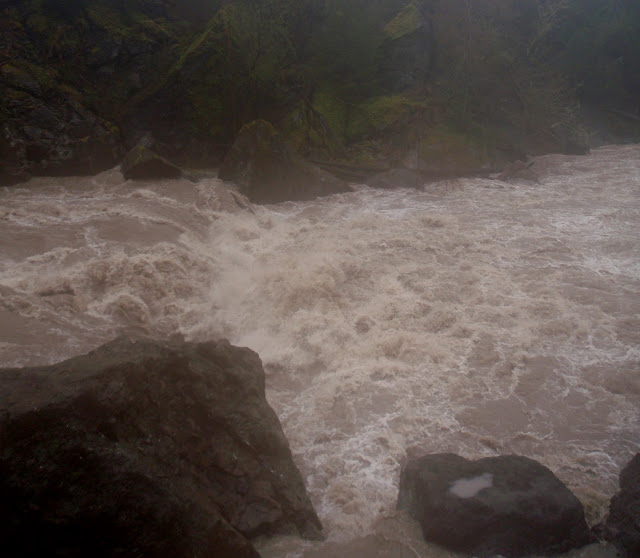 and then there were three laterals that could be surfed to the left to avoid another bus-sized hole on the right 100 yards downstream. 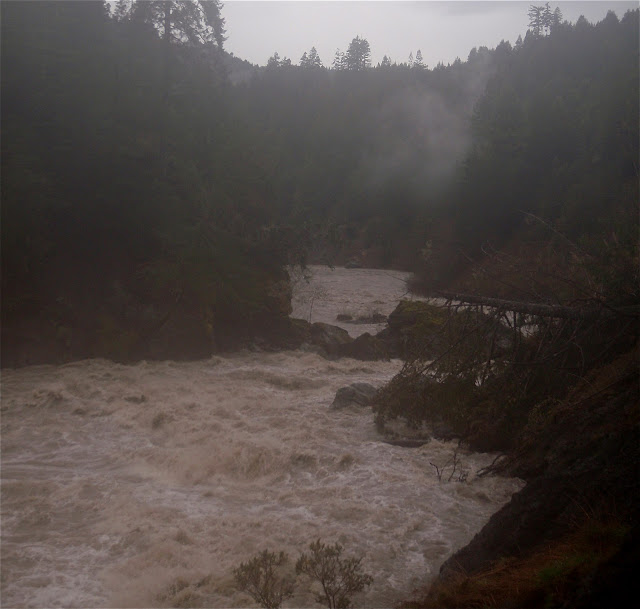 The farthest left edge of this hole was decorated with a too-enticing-for-me-not-to boof that was calling my name like a siren.  The river then carried on downstream in a chaotic runout fashion.
After running through the line with Paul, he valiantly carried his boat back to the top, making the decision to run it.

After getting ready and thumbs up from Will with the camera we set off in a blaze of paddle strokes.  We both came charging hard and seamed cleanly through first hole.


I then immediately lined up for a surf on the top diagonal, which was actually a surging seam that doubled up and exploded on my head, but sent me left nonetheless.


Paul decided that didn't look so enticing and hit the small eddy on the right before ferrying his ass off to get right.  Here he looks down into the 3rd (last chance) diagonal with nasty wood in it.


I had made the move at this point but was staring straight down the barrel at one tasty looking boof I knew I had to hit.  I stroked right off the top, launching myself onto the boil downstream, but not the downstream side of the boil.  I quickly turned facing back into the hole and scrambled for the corner before the water grabbed hold and took over.  A couple of cartwheels later and I was swirling viciously upside down second-guessing my decision to boof.  I reached down for some outflow with my paddle and went for another jostle or two before I felt a calm and quickly rolled, in the outflow headed downstream!  Here Paul looks in on my beatdown.


The rapid continued for several hundred yards and pinched between house-sized boulders at the final crux.

I couldn’t believe it I had just gotten surfed in one of the biggest holes and rapids of my life and was safe at the bottom. Paul was waiting downstream as he had made the move around the hole and had an excellent line.  Time for celebration!  Paul had properly brought a carton of Milk, and we milked it in the eddy while the boys were portaging. 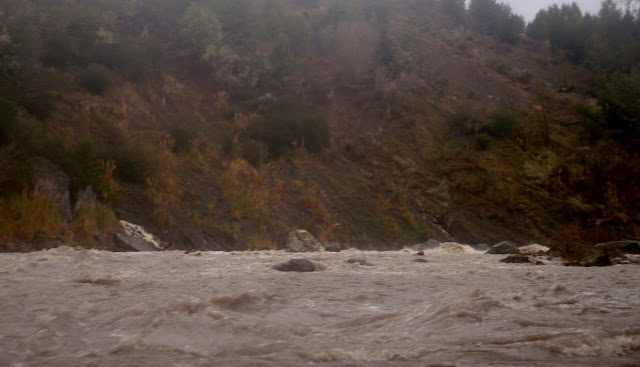 The crew rejoined but my adrenaline was still buzzing as we paddled downstream into the class I.  A highlight feature of this run is the old Swasey Dam, which lies downstream from here several miles.
Swasey Dam was built in the late 1930’s to provide water for Eureka.  Since the construction of Matthews Dam created Ruth Reservoir upstream this dam lost its necessity and it was eventually removed in 1970 restoring fish passage to the many bountiful Salmon-producing tributaries above here.  This is a highlight of the trip; none of us had ever paddled through a dismantled dam before.  It’s a surreally good feeling for a kayaker to paddle a freely flowing river through the remains of where there once stood a Dam.  At 10,000 cfs, it forms a good surf wave too!
An hour later we were paddling into the Blue Lake valley, looking for the lake.  Instead we happened upon the fish hatchery weir structure which formed a river-wide surf wave—the discoveries of this trip are never-ending and seemingly around every corner, but this was just too close to home.  Go surf it!  It flows at levels much lower than we had I’m sure. 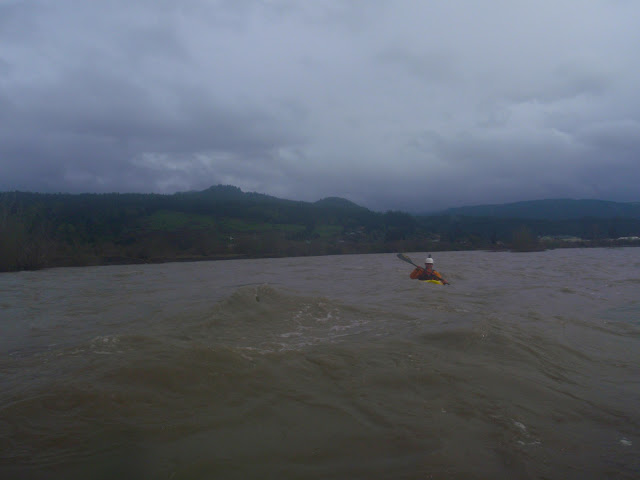 The boys went back for Wes’ truck allowing Paul and me to paddle the remaining miles to the Mad River Beach Boat Ramp.  Even at 13,000 cfs this section is slow and we were stoked when the Hamman Trail bridge appeared and the boat ramp shortly thereafter.  We waited about 1 minute before the shuttle boys arrived in a watery splendor, splashing through the gigantic puddles that form on the Mad River Beach Road.  We were fired up!  Time to go kayaking while we’ve got water so we went straight back to the drawing board for our next hare-brained paddling scheme.  The Lower Mad River produced and was a beautiful roadless stretch of river that deserves to get paddled regardless of only having 2 rapids…they’re big ones!  Thanks Paul, I couldn't have run it without ya.  Happy Paddling, Dan.

Posted by Daniel Menten at 8:34 PM