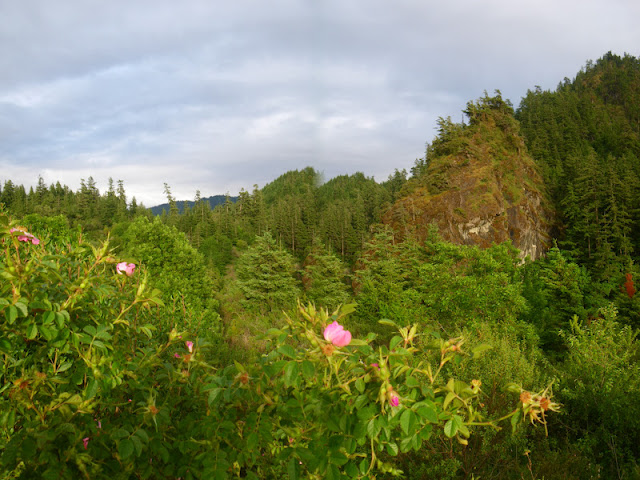 Returning to the very same spot we took off the Van Duzen two weeks before was an exciting feeling.  We were stoked to have accomplished the Bloody Run and equally stoked to be getting on the Goat Rock section at a great level on a beautiful sunny day.  Flows were right about 1200 cfs on the gauge at Bridgeville as we drove through the unadulterated redwood groves that dominate the Highway 36.  Since we were along the Highway 36, perhaps the most hitchhiker-friendly road I know of, we shared a ride knowing shuttle would be no concern.  Along the way we spoke of how the long-range weather forecast was changing and beginning to show signs of storm activity.  This was equally exciting to us as our plight to paddle all Six Rivers of the National Forest seemed in jeopardy due to a lack of sufficient snowpack and water in general.  We put on at the confluence of Little Larabee Creek, where an easy trail leads to the river.  Not before we took a look at Goat Rock Falls from high above though.  Here is the overlook view of the entrance crux and the Pinch below. 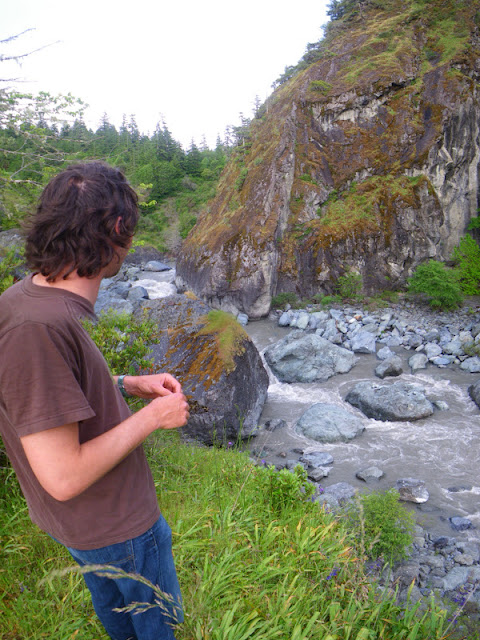 For kayakers, even locals (with the exception of one) Goat Rock isn’t even on the map.  Mostly paddlers come to the Duzen for the classic Grizzly creek section downstream and at high water will occasionally drive up to Goat Rock Falls to stare in awe at the amazing spectacle.  At 20,000 cfs it truly is amazing to look at and there is a perfect trail leading down to an overlooking precipice from the road.  I have paddled on the section once before but circumstantially, when we arrived at the crux we hiked out up the right bank in the dusk.  That was over 10 years ago and after recent forays into the drainage and seeing the drop at reasonable levels I was really excited to get on the run again.  Goat Rock also comes highly and unconditionally recommended by the fabled local boater Silent Ed, who paddles it solo regularly.  Here Paul scouts the crux from above at river level.


Paddling downstream the river has a great pace, much better than the flat-water paddle-out from the Bloody Run.  We passed through the zany town of Bridgeville, which has a storied history as of late.  Bridgeville became widely publicized as the first town to ever be sold on E-Bay for a cost of $700,000 in 2002, only to be resold again in 2006 for $1.25 to a self-made 25-year-old millionaire.  The sale included 3 cows, 8 houses and a post office, sounds like a good deal to me.  But the story doesn’t end there; three months after purchasing Bridgeville the new owner tragically committed suicide with a gunshot wound to the chest.  I told the boys about this as we floated past town and directly underneath the highway bridge we came across the first rapid.  The Bridgeville Boof left a good taste in our mouth and we all wish shots were taken (no pun intended).
Downstream from town the Duzen lets up briefly with an extended warm-up before getting down to business Van Duzen style…a blind horizon line with large boulders blocking the view.  We scrambled briefly as I scratched for an eddy at the lip, then peeled out through a narrow slot drop into a boiling hydraulic and around the backside of a monstrous boulder.  I was all good below the drop but unable to communicate that to the crew above and had to wait for a minute before they all came charging through.  We continued downstream through more excellent class III-IV boogie before reaching the Headwall of Goat Rock proper.
Looking downstream at the runout of the crux and the entrance to the pinch

The entrance drop into Goat Rock is the most critical move and has the biggest hydraulics due to the steep constriction along the massive river left wall.  With our healthy level the hydraulic at the bottom proved to be a stopper, but not a tractor beaming SOB.  This was good because there is only a very short break before the next drop.  In fact, the entire Goat Rock section is really only a ½ mile long rapid with 4 critical moves, and it can be easily broken up by catching large eddies.  Because of this Goat Rock is not recommended above levels of 1,500 cfs at Bridgeville.  This is also not a great run for beginning creekers at the higher end of the runnable flow range.  I would recommend starting between 800-1,000 cfs to familiarize yourself with all the moves and the hazards before pushing the level up.  Portaging the main drop is difficult and only small eddies exist above 1,000 cfs.  Goat Rock is a solid class V considering the many inconspicuous consequences.
The second crux just downstream is the Pinch, where the river is funneled through a backed up ledge hole that feeds into a slot.  The drop is straightforward but I’d hate to be getting surfed in that hole so keep your nose up!  Looking upstream from Goldenbeard at the pinch.


The outflow from the pinch pushes towards river left where a hideous sieved out rock pile lurks.  The Goldenbeard Boof is on the right and where you want to be, really.  Looking downstream across the lip of the boof at the hideous rock pile in the background.


The third major move is Goldenbeard, a money boof drop where the line is hard right, almost against the bank.  As with all drops on the Van Duzen you should inspect them carefully and regularly depending on the flow levels…many unknown hazards exist and the turbid brown water can hide rocks mere inches beneath the surface.  Boof the crap out of this one!  Looking back upstream at Goat Rock and the Goldenbeard boof.
Birds eye view of Goldenbeard from the overlook. 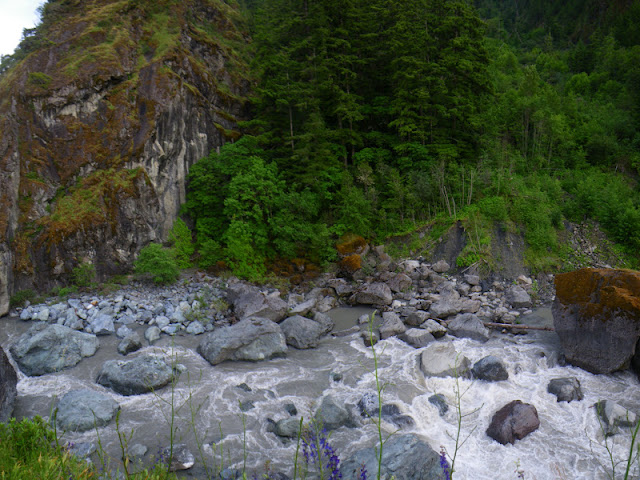 The Runout from Goldenbeard
Goldenbeard feeds directly into a class III run out before the final drop of the section, The Deathtrap boof.  An appealing and straightforward boof line exists down the right channel, however a sneaky and extremely dangerous crack in the rock is just to the right of the line.  Inspect it carefully, but enjoy another high quality boof the Van Duzen has to offer.
If you go too far right for the boof a dangerous siphon could potentially do bad things.  Boof 4 safety like Wes Shrek is doing below in the only kayaking picture we have from the day.
It was a beautiful day and we ran this boof a couple of times for good measure.

Will, Paul and Me downstream of the Siphon, fired up on the quality boofs we'd paddled.

Downstream the river mellows into a class III paddle out most of the way to Golden Gate Bridge, the take-out.   Be courteous of the friendly locals here as it is their neighborhood.  As mentioned, we hitchhiked our shuttle because Highway 36 is where its at!  Friendly locals, good weather, amazing scenery and great boofs less than an hour from home…how come this was my 1st time? 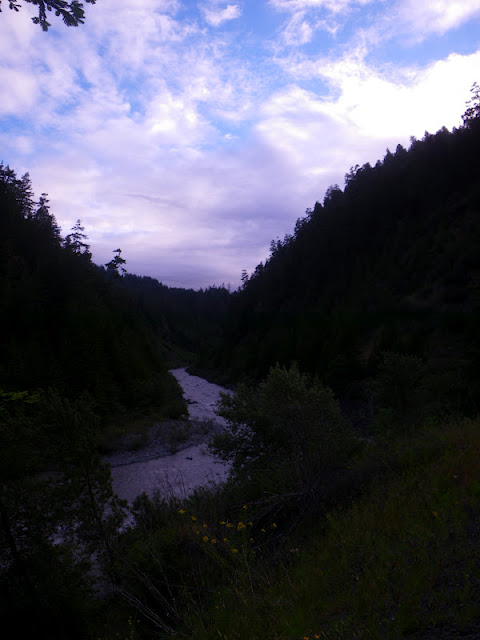 Posted by Daniel Menten at 3:51 AM