This was a 140 mile endeavor that could only have been thought up by the Explore Six Rivers crew.  The plan was to paddle as far as we could in the first two days so our last day wouldn't be an attempt to cover lost ground.  In the aftermath of one storm we would get a nice day of weather before it was supposed to rain again.  Earnestly, we were hoping to catch as much extra water as possible to carry us downriver without undue effort.  For this trip we owe a big thanks to Don Iverson, Alice DiMicele, Jeff Burlingham and Tom Alexander of Four Winds Rafting in Seiad Valley.

It was a dream of mine to paddle the Klamath River in an open canoe--for various reasons.  The primary reason was that class III water is simply more exciting for me in an open canoe than in my kayak.  I get scared at something that I would happily go play in with my sprayskirt and double-bladed paddle.  Open canoes make for excellent craft during long floats, you can stretch out and enjoy your surroundings much more than when being cramped in a small kayak.  You also sit higher and are afforded a better view when boatscouting.  I don't own an open canoe however (aside from an old slalom C-1 in Idaho) and had to resort to other means of obtaining one--i had to talk to the godfather himself.


Don Iverson is the godfather of open canoeing in California.  He has devotedly written an article published in AW about the many advantages open canoeing offers relative to kayaks.  My meeting with the godfather was arranged through one of his associates, Matt Titre.  After arranging the deal, Matt called me with good news that the godfather would see us on the way out of town and provide a canoe for the trip.  I was nervous about the exchange but confident in Matt's word.  We pulled up and introduced ourselves humbly.  I walked with Don over to the boat rack and started discussing which vessel I would be using.  The rack was adorned with open canoes of all shapes and sizes...tandem canoes, wide ones, narrow ones, flatwater canoes.  Don pointed to a wide red one, suggesting it was the best choice.  Being a wily one, I asked about other possible options and Don singled out a narrower, shorter Dagger Rival that had much more appeal to my eye.  The deal was done, included was a bailing bucket and floatbags, an essential piece of open canoe equipment.  We loaded the boat as gingerly and securely as possible while Don looked on.  Then we made our departure, feeling good about the coming adventure.

Wes drove all the way to Medford, 3 hours away, where we had arranged a place to crash for the night with my good friends Alice and Jeff.  Alice is an amazing musician who has produced something like 13 albums and Jeff is an awe-inspiring surf kayaker, they are both wonderful folks and gracious hosts who accepted us despite our late 11 o clock arrival.  Alice even sang us a new song she wrote called "Schoolhouse" about surfing the namesake wave on the Klamath River and the need for Dam Removal on the Klamath.  It was a special moment for our crew who proceeded to sleep like a bunch of babies.  Waking up early we proceeded towards Iron Gate, with a quick stop at the gas station in Hornbrook to fuel up on coffee and pre-packaged doughnuts for our breakfast.  It truly felt like we were in real America, with an aura of flags and rednecks. 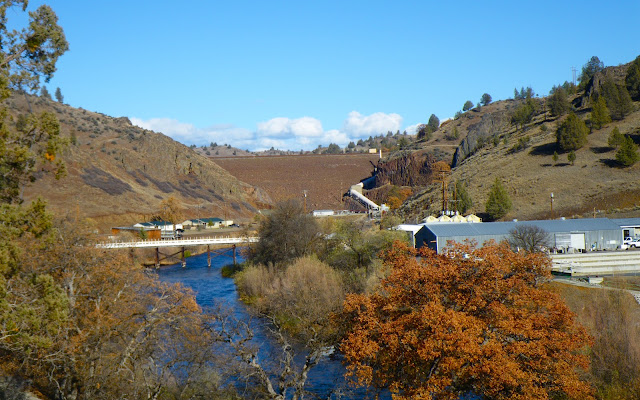 After arriving at Iron Gate, the posse geared up for the initial flat miles down to the I-5.  The plan was for our crew to alternate running shuttles, thus avoiding having to bring a second vehicle considering the obscene gas prices these days.  Also, when you're covering 140 miles, you don't need to get every mile to feel like you've done something, so the arrangement worked out with a little sacrifice.


Hitting the water felt good, we were moving fast and it was a beautiful morning.  It also felt good to be paddling for fun, the last time I had seen this stretch of water was while conducting salmon carcass surveys for work and my memory is tainted with the putrid stench of rotting fish and chopping through them with a machete.  We would pass a bend and I'd reminisce about the time I had to chop a big slab of fish and got "mung" splattered on my face.  The thought of not being able to eat because all I could smell was carcass came back to me.  Good times. 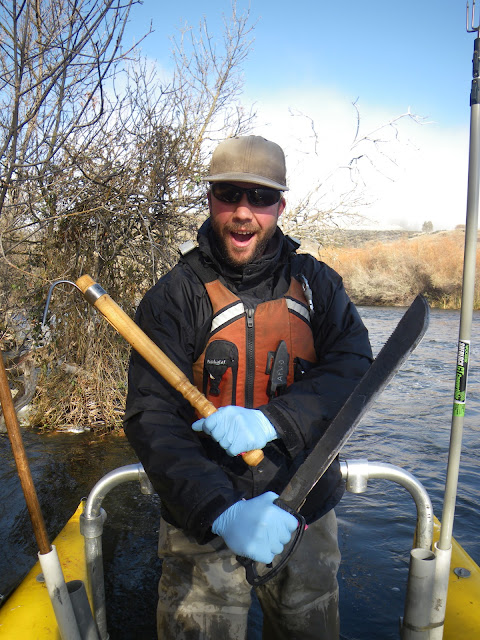 The Klamath River has a huge fisheries issue that has been reaching a climax with the recent discussions of dam removal.  Iron Gate forms a total barrier, blocking salmon from hundreds of miles of river upstream where they historically spawned.  In addition to cutting off fish from available habitat, the Dams create water quality issues associated with high temperatures, toxic algae blooms and low dissolved oxygen levels in the river.  Just downstream from our put-in we ran into a fish crew that was trapping juvenile salmon to monitor their condition and abundance. 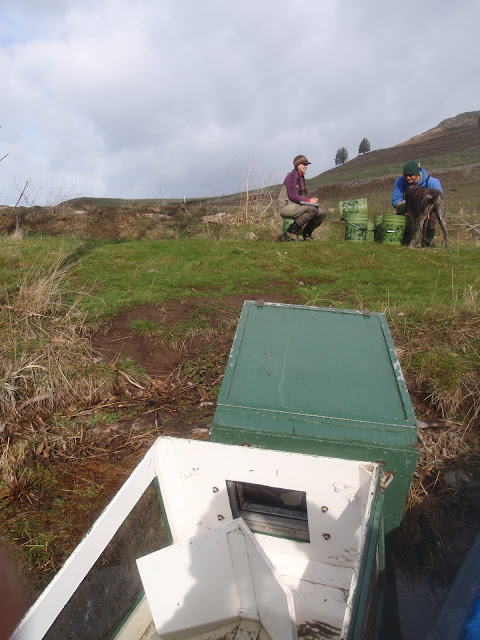 Actually it was my buddy Phil, who is a good kayaker and all around great guy.  We said hello before passing on, we had miles to cover!  Here is Paul with the fish trap deployed behind him. 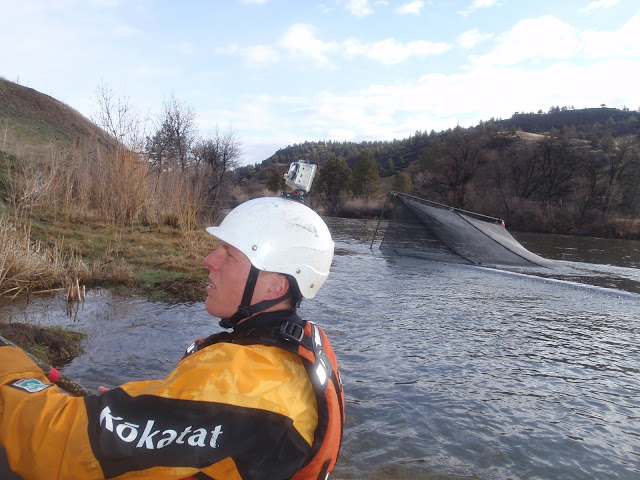 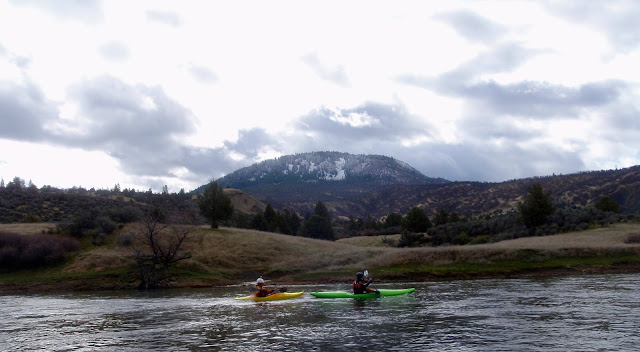 There are actually some decent class II rapids through this section and a couple of playspots that made for enjoyable river time.  My ankles and knees were starting to remind me why I stopped canoeing years ago, but the beautiful scenery egged us on as we made good downstream progress.  Here is a uniquely decorated river-home we passed along the way. 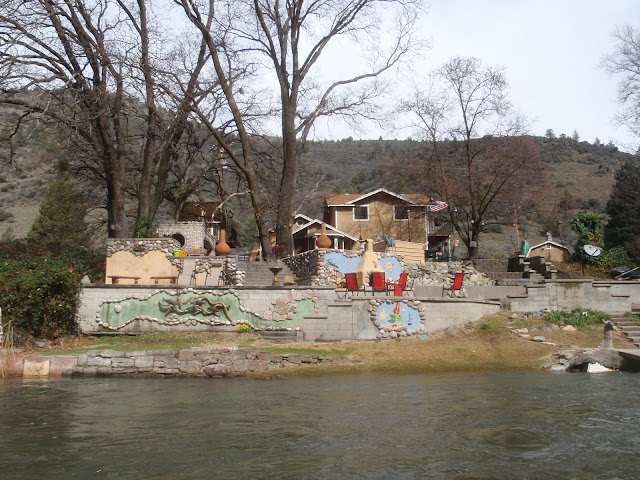 Eventually we reached the I-5 bridge and Shasta River confluence, downstream of which an excellent access point waits at the "snagging hole".  Here we traded up shuttle drivers and ate a quick lunch before continuing downstream. 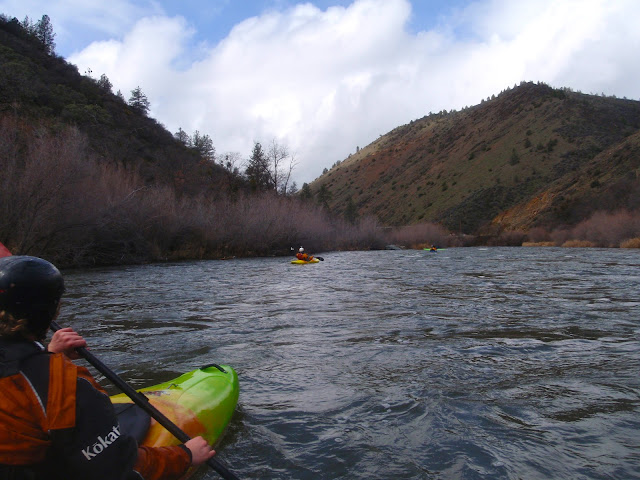 The river had grown already and combined with some extra gradient the next several miles were quite enjoyable.  As you paddle downstream on the Klamath River, you pass the sagebrush hills of the upper river and begin cutting into the forested canyon that splits the Siskiyou and Marble Mountains. 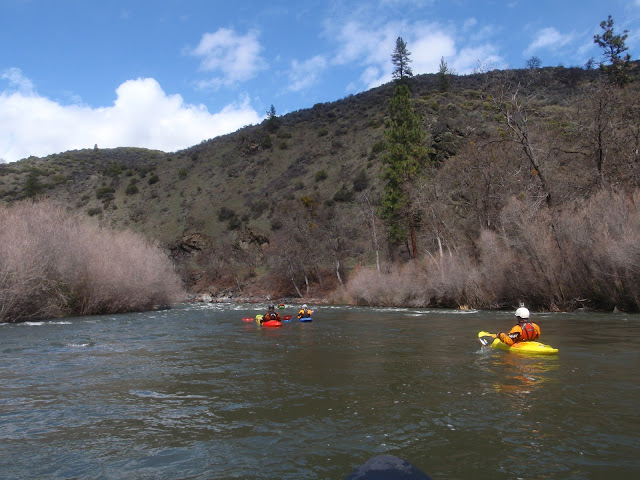 In places the south facing slopes are desert sagebrush while the north facing slopes host grey pine, ponderosa, and douglas fir.  Eventually, Oaks and Madrones get into the mix, along with ferns, cedars and eventually you find yourself in a beautiful forested canyon that feels like anything but desert.  Side creeks are virtually everywhere and the river constantly seems to be growing.  Reaching the confluence with the Scott River was a major point along this section, as the Scott River was gushing from recent storms.  At the confluence, the Scott River water came bursting into the placid Klamath as a brown watery wave train.  The flow almost doubled here and we were stoked to make some easier miles with the extra water.  A mile downstream, Hamburg rapid presented the crew with its biggest obstacle in a while, and definitely raised the hairs on this open canoeists neck...Here is Paul, coming through some quality whitewater on the Klamath River. 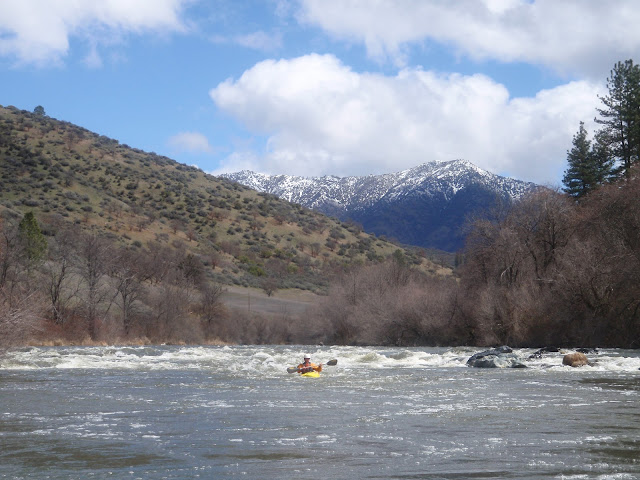 Along the Klamath you see lots of structures that were flooded out and abandoned due to the high water of 1964. 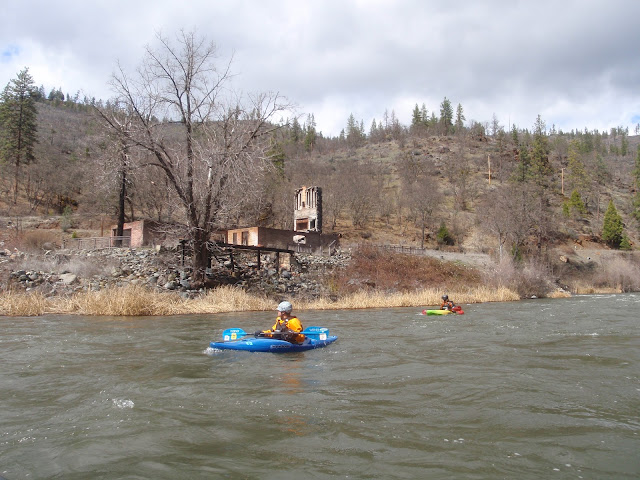 The next several miles presented some excellent whitewater, with solid wavetrains and swirly water due to the added volume.  The flows at this point were closer to 4,-- ???  for the day and we had officially begun to increase our average pace.  Suddenly we heard gunshots downstream, although we yelled and tried to get some attention the gunfire continued so we were forced to paddle tight along the right bank with bullets literally whizzing over our heads.  Floating on the Klamath. 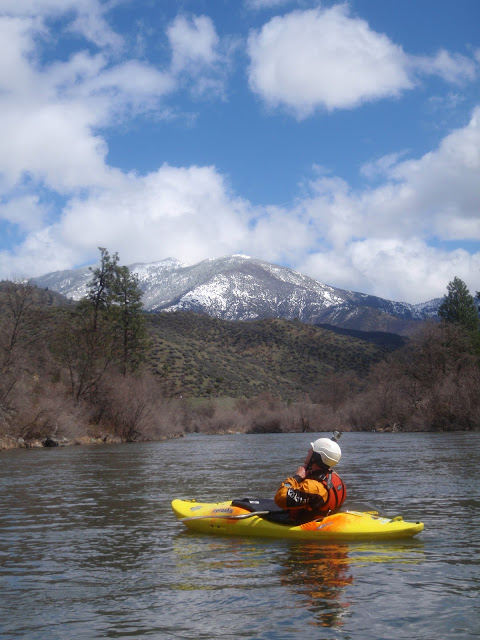 I was getting nervous in the open canoe.  After a couple more miles the river flattened out as we entered Seiad Valley our final destination. 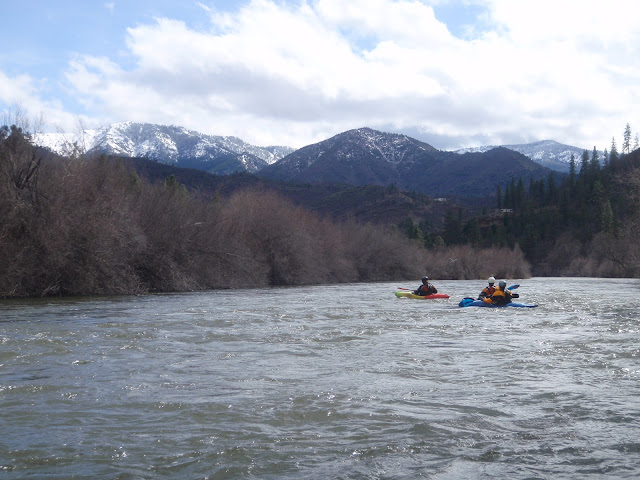 We paddled through the valley and took out at the Sluice Box, passing Grider Creek and Seiad Creek along the way.  The Klamath was flowing strong and I looked nervously towards the whitewater that lay ahead in the coming days.  But we were blessed, because Alice had arranged for us to have a place to stay with Tom Alexander at Four Winds Rafting Company in Seiad Valley.  We were graciously hosted and very happy to have a roof over our heads when it began raining.  Discussion of the next day on the water, as well as pizza in Happy Camp was already in the works and we shot for an easy Seiad to Happy Camp for our second day on the water.
Posted by Daniel Menten at 2:50 AM