One day after ticking off 40 miles on the Lower Trinity we chased the rain straight back up to Weitchpec and beyond!  The plan was to kayak straight through the heart of bigfoot country and tour the Yurok Indian Reservation via. kayak.  With flows of  17,000 cfs at Orleans Miguel, Paul and I put-on in hopes that the abundant water would carry us quickly through the flat sections of the lower river.  Paul surfing the Big-Bar wave. 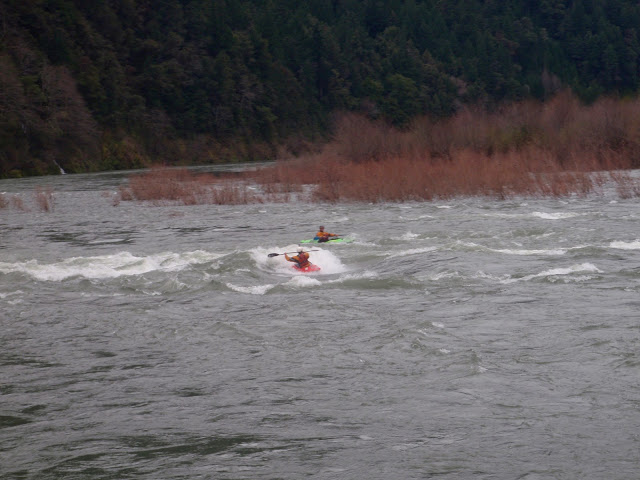 Hoping to paddle 50 miles was a tall order but we felt up to it and put-on with a business-like fashion at Orleans.  Will honorably elected to drive shuttle in an effort to get some good camera shots from the road and the plan was to make the call at Weitchpec if we thought we were making good enough time.  Right away we were making good time, surfing the goods.


The Klamath is amazing in that it has so many large tributary streams coming in from both banks.  Seems like every other bend another large creek is coming in and the river flows swiftly. The Klamath is also a very mighty river with a an ominous feeling of history that tingles your spine at times.  After floating though Orleans, Camp Creek spills on on the right bank and the Klamath enters a beautiful canyon with an excellent wave right at the entrance.

After flowing through this beautiful section of River, Red Cap Creek enters on the left.   The canyon continues with beautiful metamorphic bedrock. 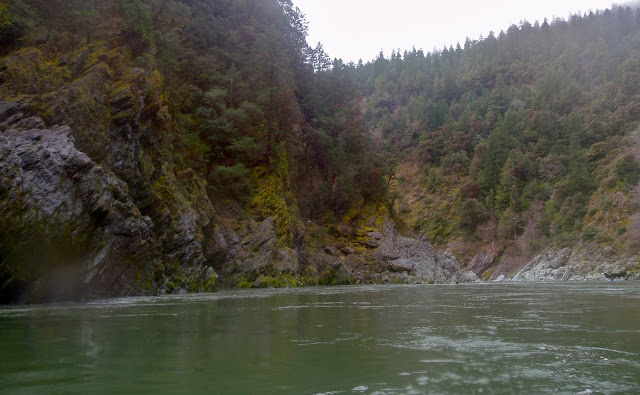 Then the road begins to drop closer to the river right at the big bar river access.  This spot has a surf wave that I have literally driven past a hundred times on my way to other runs but surfed only once.  Turns out it was a good flow and we sessioned for a while, close-up view from the eddy.


Then another couple of rapids bring you down to the confluence of Bluff Creek, coming in on the right.  The realignment of Bluff Creek during the flood of 1964 is is one of the most unique geological features I've seen.  Bluff Creek actually used to flow along the Highway 96 and empty into the Klamath 1/2 mile downstream of its current location, but in 1964 the amazing volume of water caused the entire hillside separating the Klamath and Bluff Creek canyon's to collapse, sliding into the Klamath River.  The result is a gnarly class V spectacle that has rearranged multiple times in the 11 years I have lived here.   We drove past this spot after a huge rainstorm and while standing on the bridge you could literally hear the rocks tumbling down the riverbed and caroming down the amazing whitewater spectacle!  It is a powerful place, Bluff Creek is also the location of the famous Bigfoot footage that cannot be disproven, here Paul walks up from the Mouth of Bluff Creek looking for signs of Sasquatch. 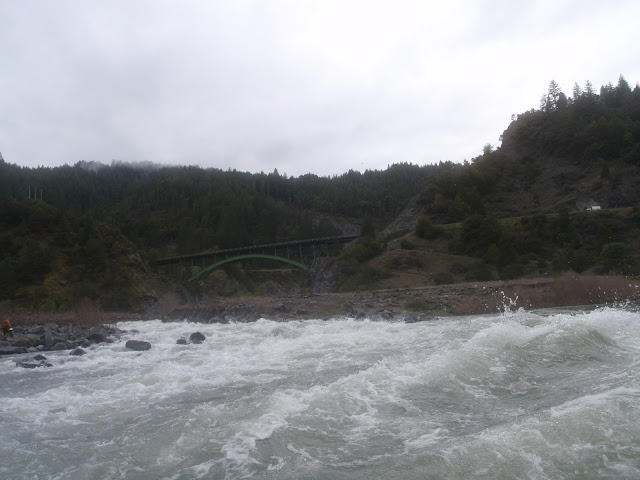 Downstream from here the river charges through an interesting rapid with a huge surfwave.  Problem is just downstream there are some huge whirlpools and a gnarly eddy line so it takes a little liquid courage to drop in on!

The big rock always visible from highway 96, and Orleans Mountain as the backdrop 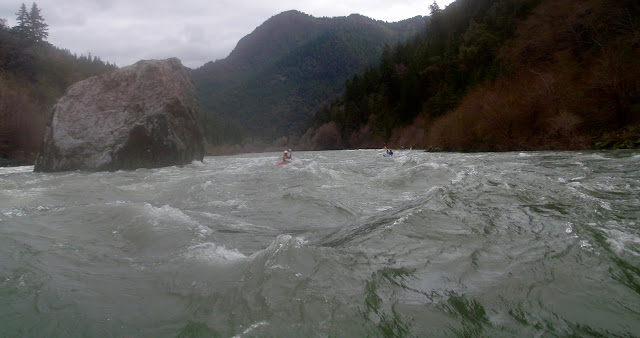 We continued along in a flurry of wavetrains, making easy miles and enjoying our time on the water.  Stopping in Weitchpec we grubbed down on our lunch before bidding our friend Will adieu.  Then we continued along downstream with the addition of the Trinity River that was flowing a strong 10,000 cfs   at Hoopa that day.  A fun wavetrain just downstream had weird boils and swirls and I realized this may be the largest volume of water that I have ever kayaked on!  It was exciting and the rain continued to fall on us as we passed the mouth of Pine Creek.  Pine Creek has an excellent class IV(V) run, and first D potential higher up. 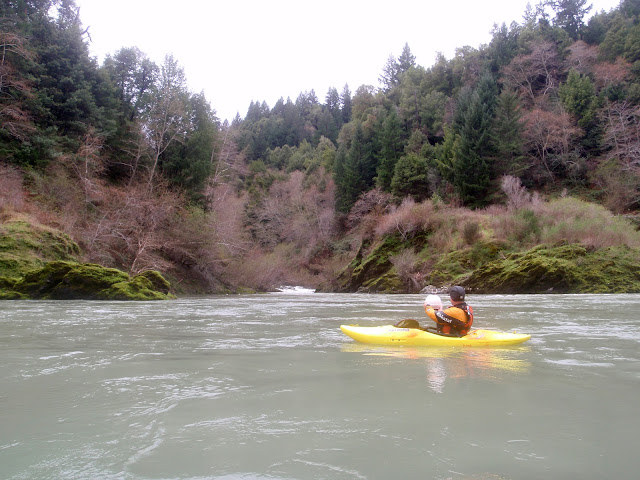 And then we passed the Martin's Ferry Bridge. 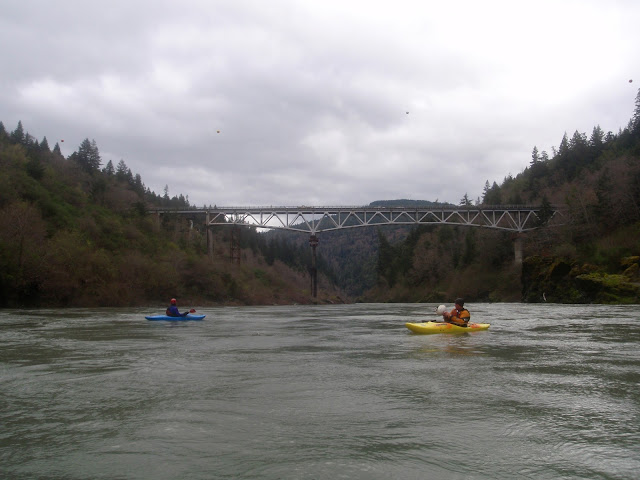 The Martin's Ferry Bridge was structurally weakened following an earthquake and extremely high water event in 2006.  The highway department closed off the bridge and for a little while the residents downstream of Weitchpec who live off the Bald Hills and Tully Creek Road were cut off from the road back to Weitchpec, the community hub.  Well, it could only last so long before people were risking it and charging across the bridge in their vehicles.  Before long I was driving across the bridge, mistrustingly, on my way to the Bald Hills Road back to the coast near Orick.  It seemed like nobody minds that the bridges srtructural integrity was of no concern to the crazy locals of the Northcoast.  When we passed the bridge, however I was both surprised and delighted to see a road crew set up and working to reinforce the Martin's Ferry Bridge.  Just downstream, Tully Creek comes in, another creek that has been run, but unfortunately became plagued with landslides and portages in the last 5 years. 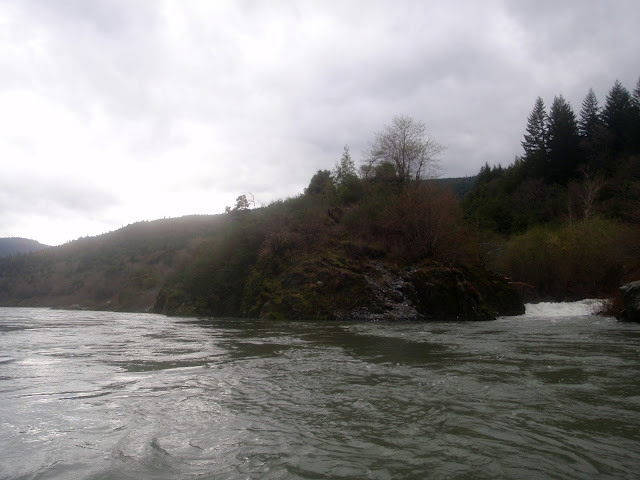 Downstream we were entering a section of river I was fascinated by but have never paddled. 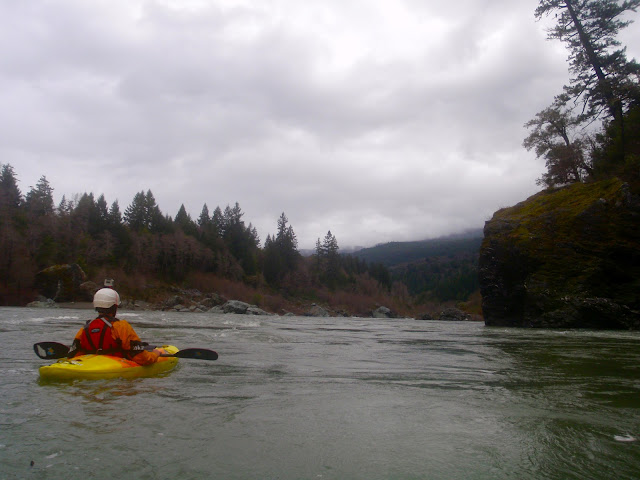 Not only is it squatchy, but the lower Klamath is also known for having the greatest diversity of coniferous trees (pine, fir, spruce, cedar, needled trees basically) in North America.  The reason for this is related to the last period of glaciation, where the majority of North America was covered in ice...the Klamath river, however, did not ice over during this period and as a result it was literally the "seedbank" from which most of the common North American conifers came.  Pretty cool huh?  Needless to say it is a powerful place and the river was huge at this point.  Fun rapids continued intermittently mostly with surging waves and randomly appearing boils. 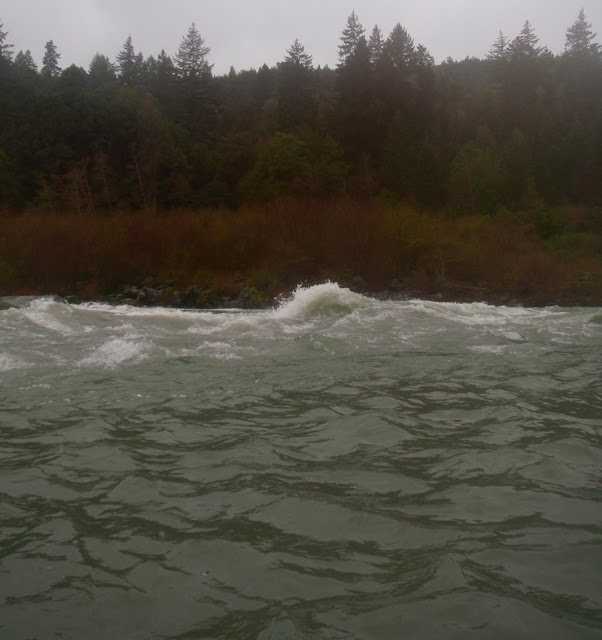 Eventually, however, we reached what appeared to be a "real rapid".  I could see whitewater on the right and dictated that's where my line should be, although the giant wavetrain down the left looked equally enticing.  I quickly realized that this splashing surging feature was actually one of the best waves I've ever surfed!

The "Discovery" wave was a solid 6 feet tall with a surging foam crest and speedy green trough that also had a tasty shoulder on the surfers left side.  Best of all, there was an eddy 1/2 mile long so you could basically run the entire wavetrain rapid over and over again after surfing this awesome wave.  I can't wait to go back here, a few miles downstream of the Martin's Ferry bridge and spend some quality time with a playboat tearing this lonely wave apart!  Here is the view downstream at the runout. 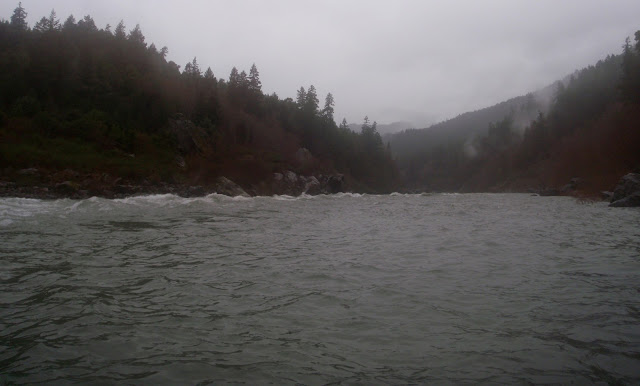 We passed into the coastal fog zone and began to see some Sequioa sempervirens , Coast Redwoods 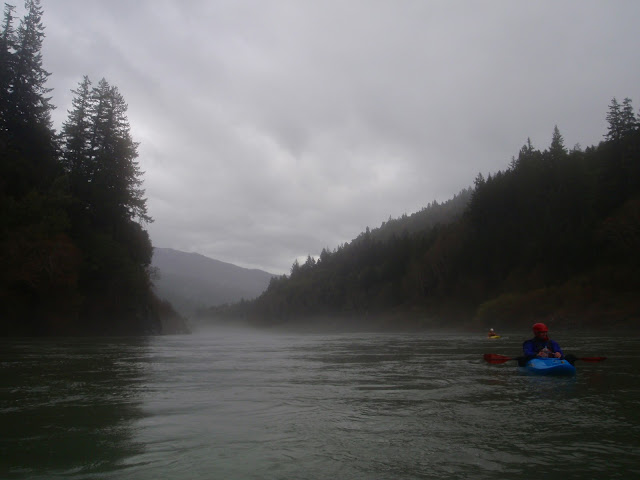 Passing the Mouth of Roach Creek, another stream that has been paddled. 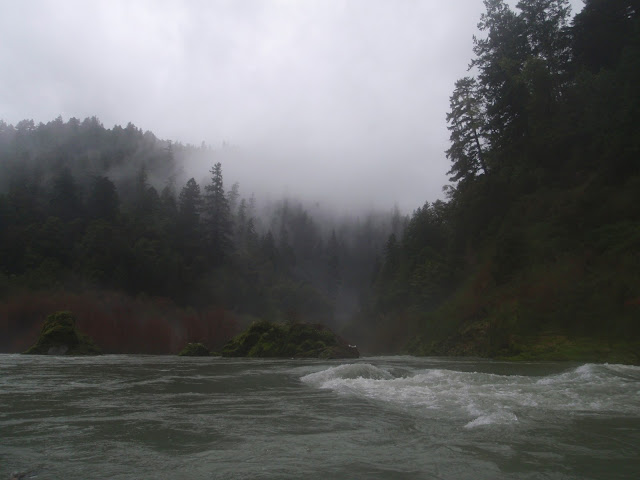 Riffles on the Lower Klamath 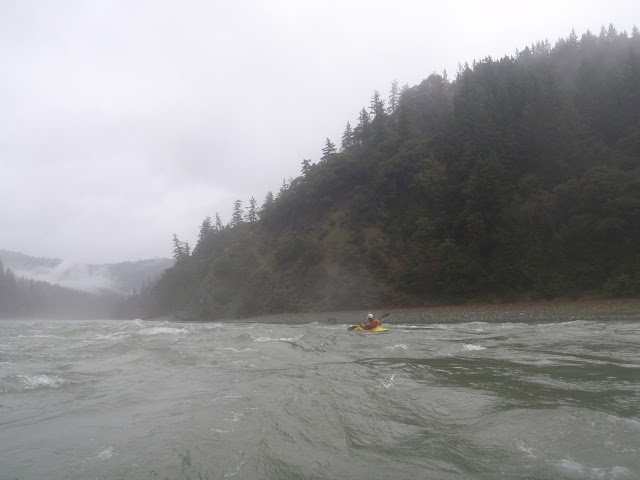 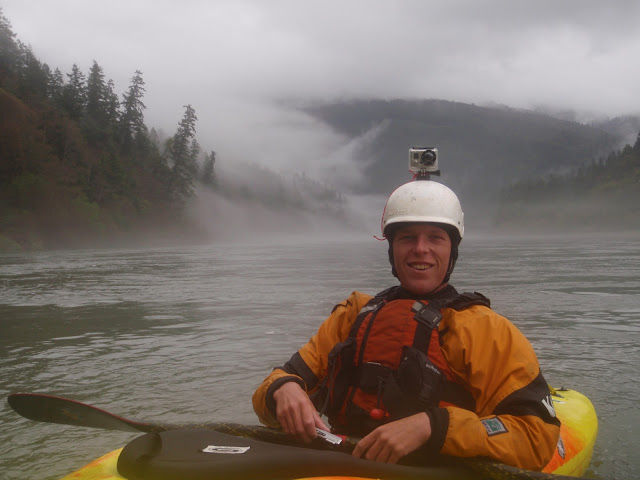 Turns out the Mysto Wave was the last real rapid on the Klamath River.  Downstream are some "riffles" but nothing I would consider a rapid, at least at our high flows of 37,000 cfs at Klamath Glen.  This section of river is notorious for having lots of jetboat traffic as many people fish the river, however it seemed that nobody was interested in taking their jet boats out on this particular day and we saw nobody else on the river, which seems to be a theme of our mission. 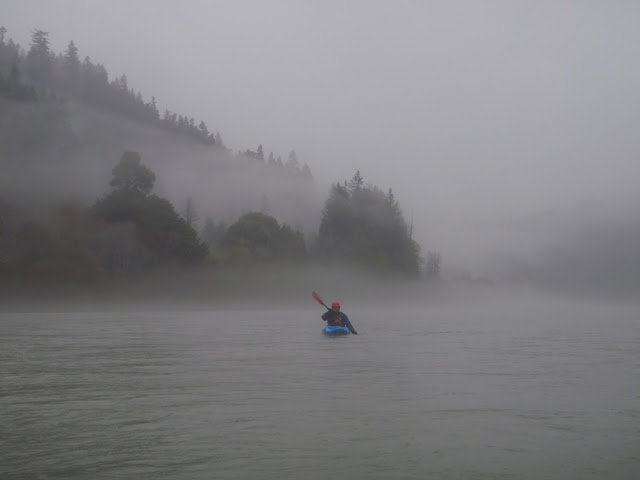 Maybe it was the cold rainy weather and fog, with high water that was discolored and too murky for fishing that kept other people off the water? 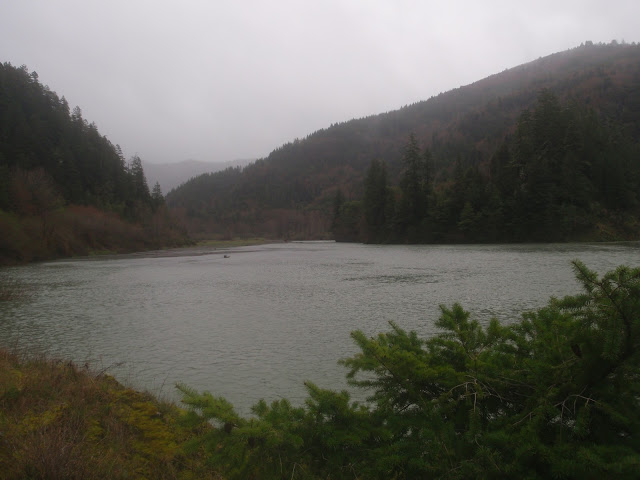 Arriving at the confluence of Blue Creek was a special experience.  Blue Creek has never been paddled in its entirety but is a dream of mine and to see it flowing strong at the confluence was inspiring to say the least.  This also meant that we were nearing the highway and our take-out.  We had been paddling pretty solidly for several hours now as the river had flattened. 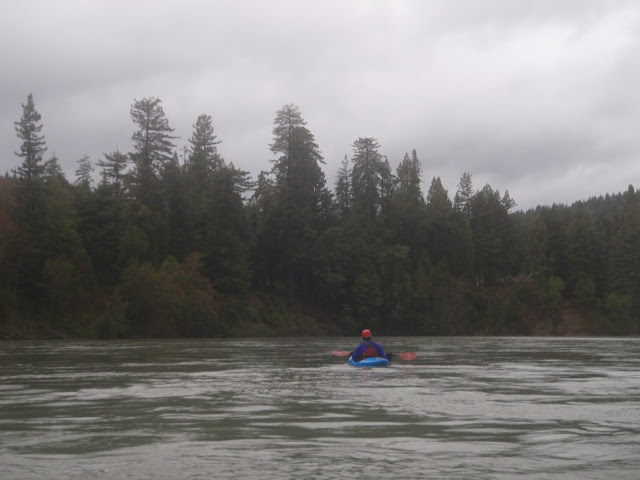 The scenery was beautiful, although only a few old growth redwood stands remain, fewer than I was expecting.  Several of them contained magnificent and grandiose trees however.

Before we knew it we were passing the stream gauge at  Klamath Glen and arrived to the boat ramp where Will was waiting for us.  It was an amazing day on the water and totally different from my expectations in that we found sick waves, had lots of current so we didn't have to paddle our asses off, and didn't see another soul.  Another quality day on the water in the land of the Six Rivers! 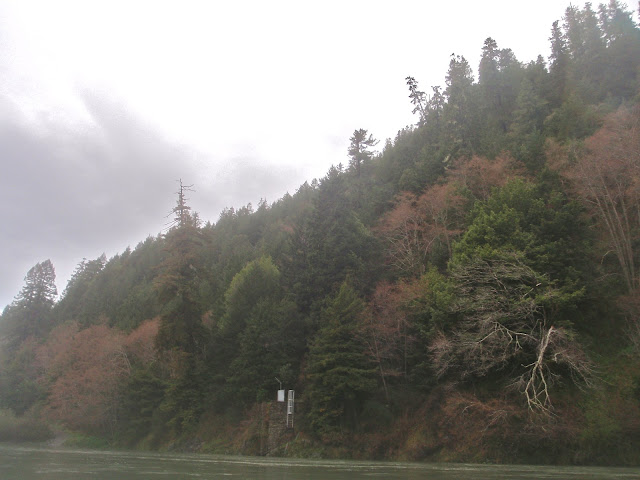 Posted by Daniel Menten at 3:06 PM