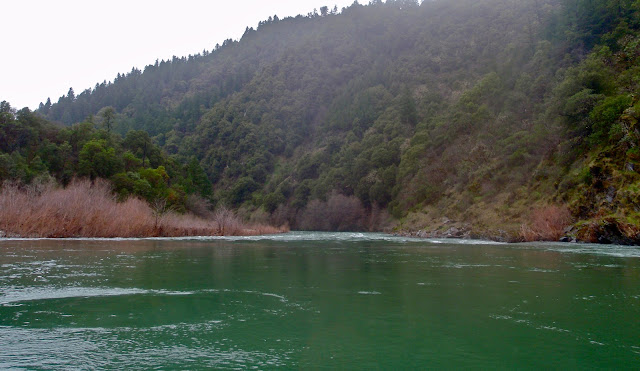 After all the boating we've been doing on the Eel and Van Duzen Rivers it was really nice to dip our paddles back in the familiar waters of the Trinity River.  We were going about the business of tackling long stretches of river since we had been blessed with recent rainstorms and the high water meant for easy fast miles.  The Six Rivers Team decided since this one was close to home it made for a good option that would enable us to sleep in our own beds for the night as the rain was forecast to continue.  Flows were 2,700 at Cedar Flat and close to 10,000 at Hoopa so we figured a trip from Hawkins Bar down would be doable. Will, Paul, Victoria, Miguel and myself rallied for the day. As a stroke of fortune and fate, we ran into some paddling friends in Willow Creek who were hoping to surf the Klamath Wave.  It was too high for the wave and we invited them to paddle with us, which they hemmed and hawed about before deciding to do their own thing.  Oh well, as soon as we hit the water, we knew they were missing out.  We were making easy miles and good playwaves were all around.  Had to stop and check out this unique miner's ramshackle in the canyon near Salyer. 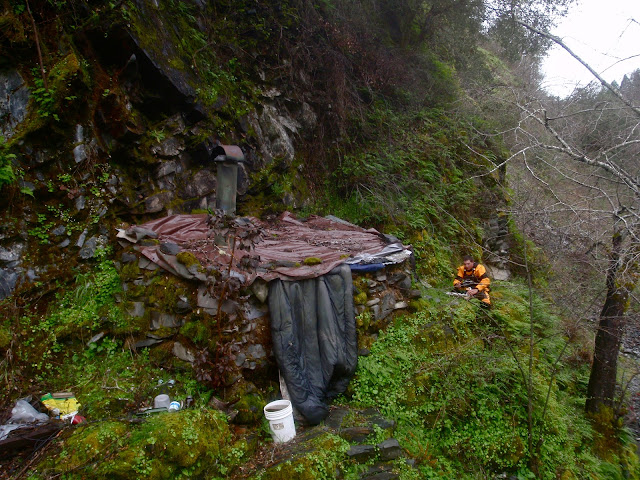 We stopped and took a break at the confluence with the South Fork Trinity, which doubled the flow. 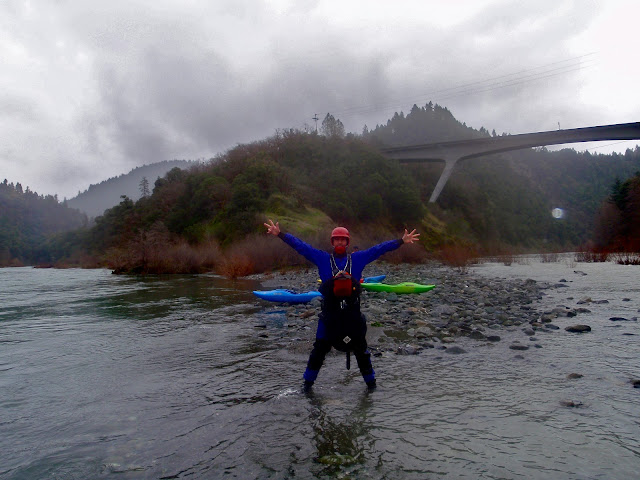 This is a significant spot in the Six Rivers Mission as the South Fork is the longest undammed river in California.  It also flows from coastal geology and has a much more turbid nature, it was flowing a milky grey and mixed into the trinity for miles downstream.  Limestone...maybe travertine? 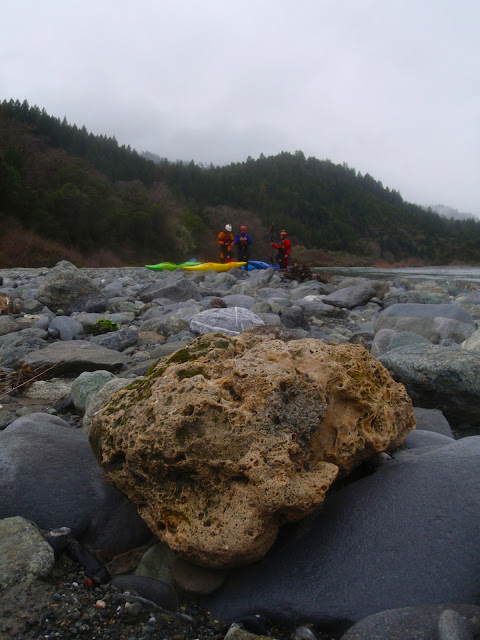 It was springtime and the flowers were right on cue. 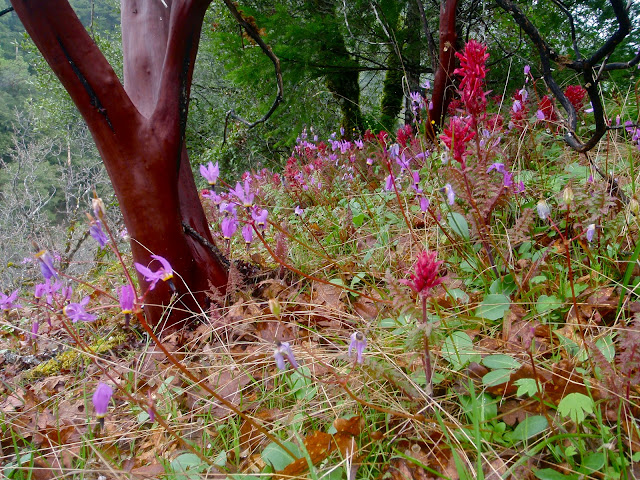 We continued downstream, making good progress and passing through Willow Creek before noon.  The Trinity flows wide through the valley before necking down into the canyon downstream. 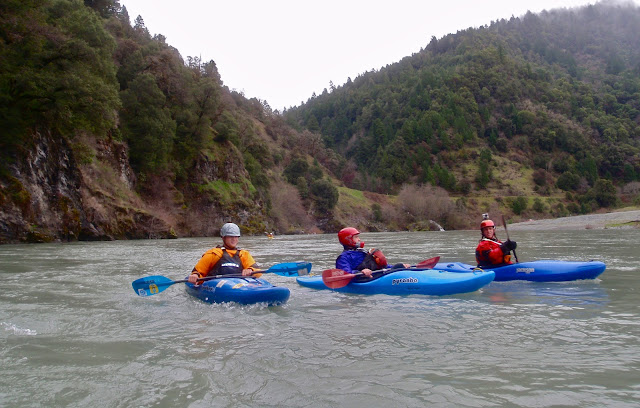 At the beginning of the canyon section is a set of rotary screw traps run conjunctively by the Yurok Tribe and Fish and Wildlife Service.  My old coworkers Hank and Bubba were working the trap that day and we stopped to chat for a few.  These traps make for a dangerous hazard to boaters and should be avoided with a wide berth by all floaters. 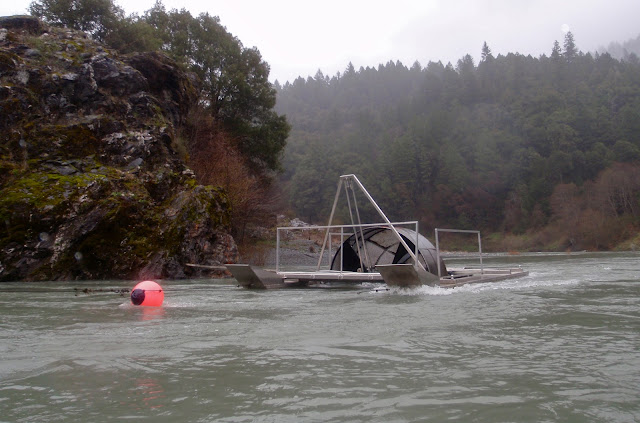 Downstream the Trinity courses into a beautiful canyon with lush waterfalls coming in along the banks.  Attempting to avoid living in a culture of fear, I stopped to take a drink, Rawdog style. 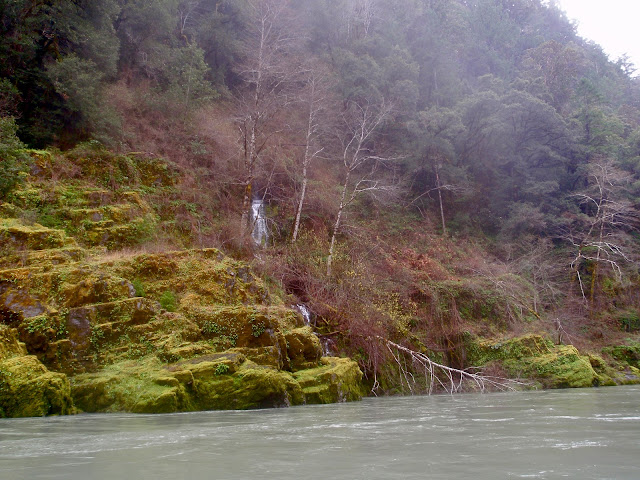 We quickly arrived at Devil's Elbow, a popular swimming spot during the summertime. 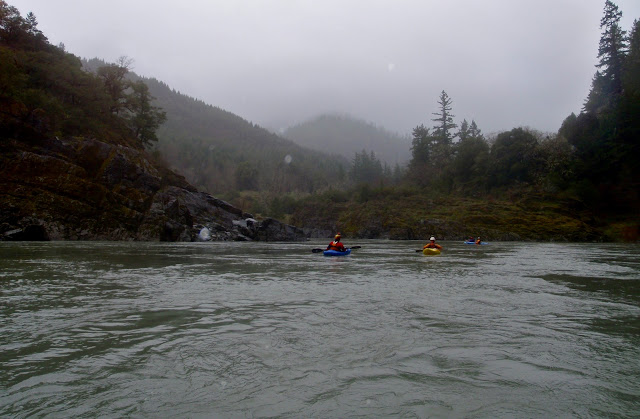 We encountered several more fun playspots through here.  Then we arrived to the Sugarbowl, the marquis rapid of the Lower Trinity River.  At 10,000 cfs it was a quarter mile long wavetrain, and the top wave made for an excellent surf.  It was also possible to work back up the eddy on river right for another go-round. 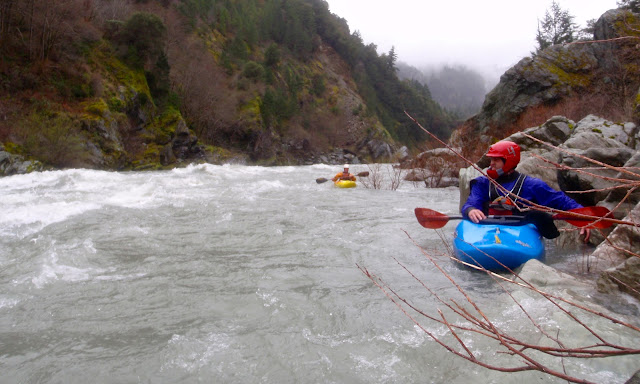 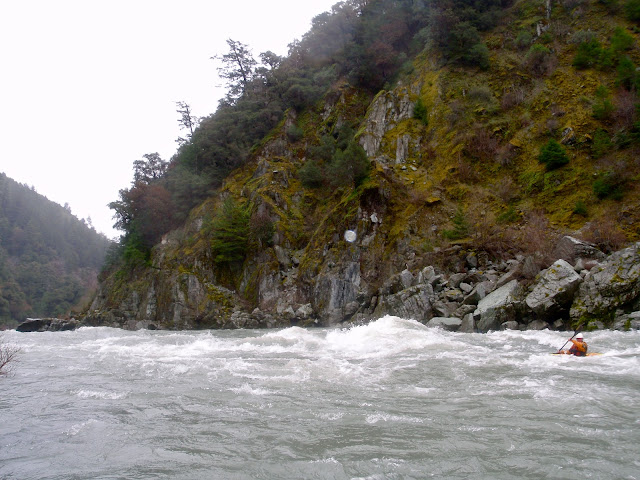 Miguel tearing it up. 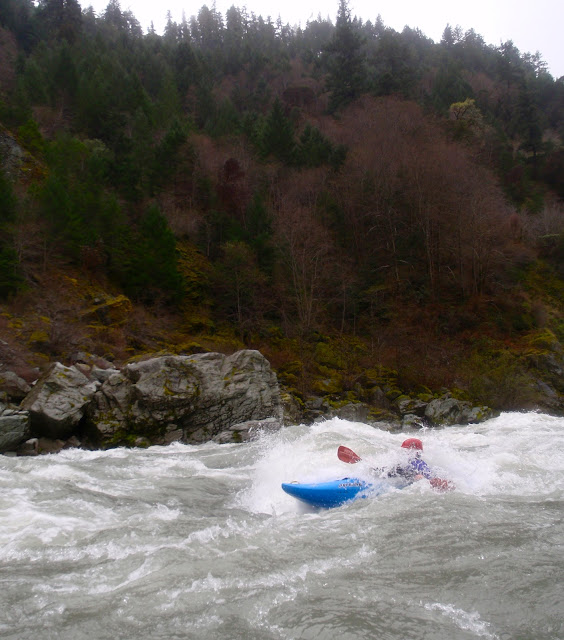 After a couple of rides we took off down river. I was expecting we would find something downstream at Smack Rock, however we found it to be totally flushed out.  There was a nice surf wave with eddy service just above it though.  Minutes later we were floating past the rope  swing and Tish-Tang creek which was flowing strong. 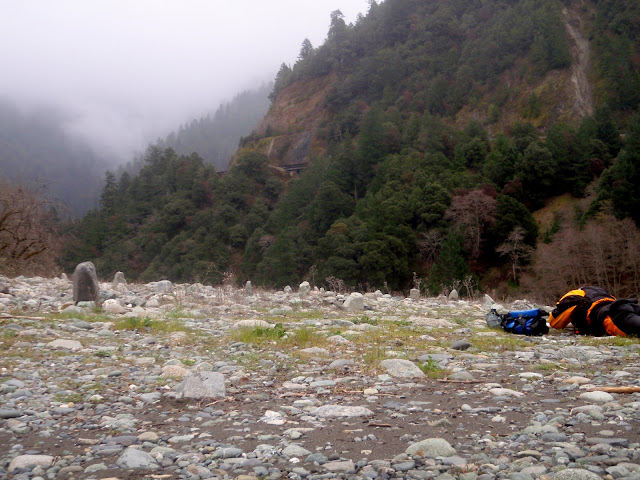 We took a break at the entrance to Hoopa Valley.  Hoopa Valley, in my opinion, is one of the most beautiful places on earth.  Incredibly fertile soil, salmon fishing, timber, and wildlife abound and the climate is perfect with a low-elevation coastal influence.  Plus, the Trinity River flows right through it!  I've always had a vision that one day, the Hoopa Valley Tribe would produce some of the worlds finest kayakers.  I mean, imagine the potential for a high school kayak team in an area surrounded by some of the worlds best whitewater.  The Hoopa would dominate.  Hoopa High as seen from the Trinity River. 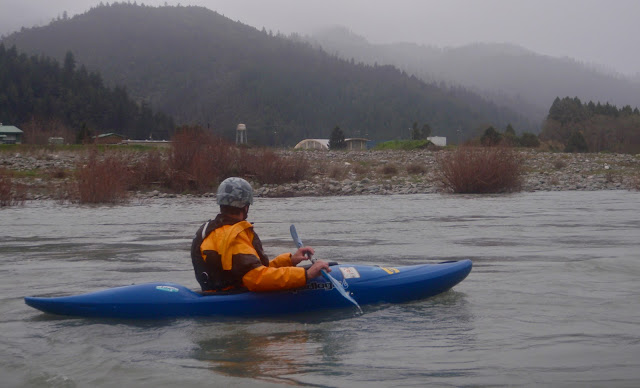 This is, however just  a dream and the reality of the situation is more complex.  Unfortunately this December river access throughout the entire Hoopa Valley became closed to non-tribal members.  This closure is unfortunate and I'm not sure how it will affect floaters attempting to do the popular Big Rock to Tish-Tang section during the summertime.  Here's my version of the story of why the river was closed, strictly composed from hearsay and rumor:

On a random day this winter, one of the tribal chairmen had arranged to do a field day, tagging along with a Hoopa Valley Tribal Fisheries crew that was conducting creel surveys.  Creel surveys basically involve interviewing anglers to monitor their catch and are used to track how the sports fishery is doing and its effects on the fish population.  Conducting a creel survey can be difficult as some people don't like to share their knowledge or just inherently dislike the government, fish and game, etc.  So the chairmen, who just happens to be along on this particular day, is standing right there when a fish guide happens to row by the fish crew.  Apparently, the fish crew was attempting to ask the particular fish guide about the catch and was met with a disrespectful attitude and lack of compliance to share the information about the guides catch.  Talk about blowing it huge.  So the Chairmen brings back this information about asshole fishing guides conducting business and using river access on the reservation to the next tribal meeting and as a result the entire valley becomes closed to non-tribal members.  Hoopa Valley is famous for both its Salmon and Steelhead fishing, and this is an unfortunate situation caused by disrespect and a feeling of entitlement.

Kayakers are also responsible for rubbing the tribe the wrong way...if you remember last year  a photo was printed on the cover of the Eureka Times-Standard newspaper of a German kayaker running an undisclosed waterfall on the reservation which happens to be a ceremonial site for the tribe.  This offended the tribe and potentially set the wheels in motion for discussion on the closure of river access throughout the reservation.  Again, this is incredibly unfortunate as there is so much good whitewater on the reservation including Mill Creek, Tish-Tang Creek, Pine Creek and Supply Creek, additionally the Weitchpec Gorge provides an amazing 2-day trip and is usually done by putting on the river in Hoopa.  Hopefully the Tribe will allow river access again someday as there are many treasures that are currently in jeopardy of future enjoyment. 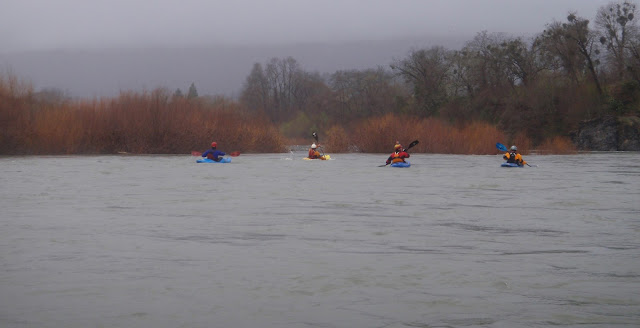 So there we were kayaking through the Hoopa Valley, past Bald Eagles Osprey and Cormorants galore.  We passed a native man who was checking his eel pots, set up along the riverbank to capture Pacific Lamprey.  Eventually we passed through the valley and started into the Weitchpec Gorge section, which I had never paddled and was very excited for. 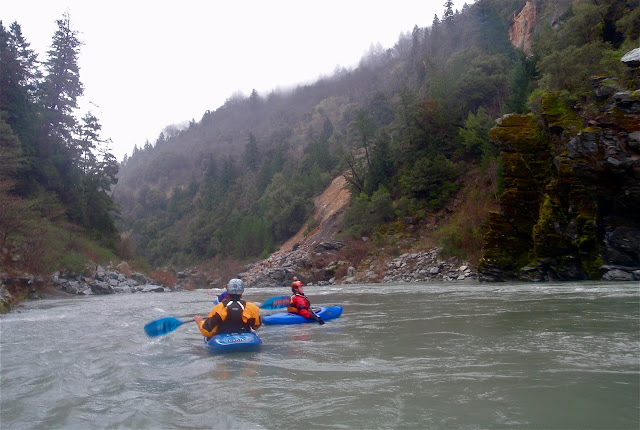 Right away there were several fun playspots and we were enjoying ourselves thoroughly.  The river carves deep into a metamorphic canyon of slate and the road is so high above it isn't even noticeable. 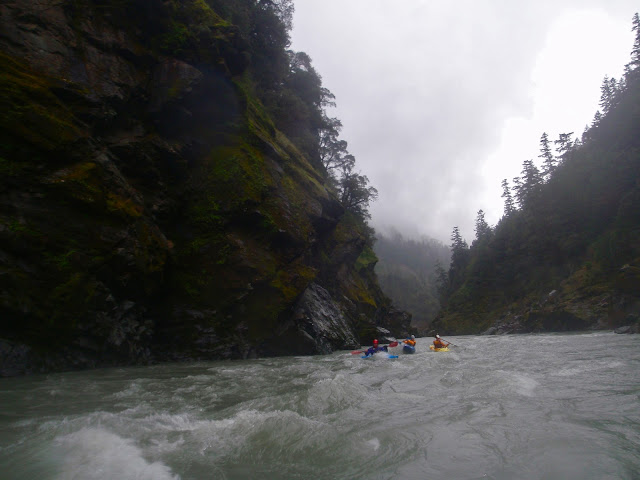 Class II rapids continue through the gorge with the exception of one larger drop, Smokers Falls, that comes towards the end.  At our higher level, Smokers Falls was mostly flushed out, with a wavetrain leading towards a pour-over boof on the left side that turned out to be a little marginal.  It was one of those boofs where you hit the rock and can feel your momentum slow down from all the plastic being scraped off your boat.  After landing the boof, I was pulled into a whirlpool on the eddy line that fully mystery-moved my creekboat!  Big fun, looking back up at Smoker's Falls. 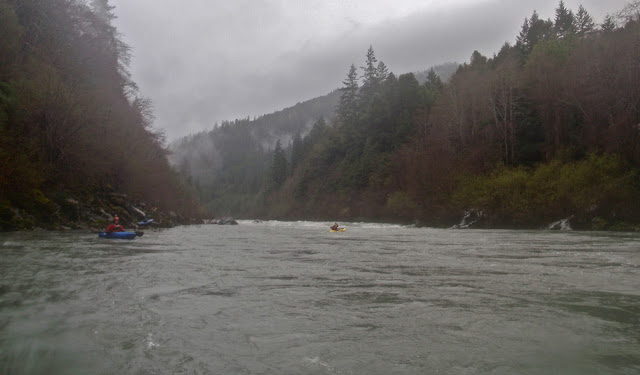 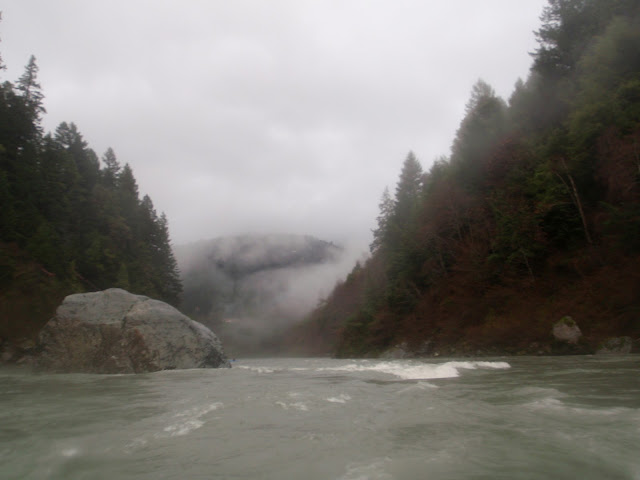 Less than a mile downstream we found ourselves at the confluence with the Klamath river and ferried hard to get across the Klamath, which was flowing strong. 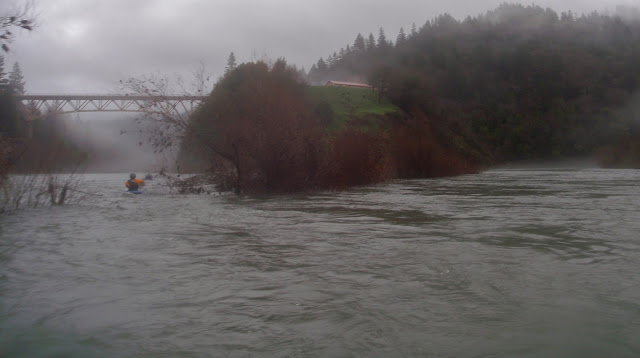 Interestingly, however, the Klamath River water was green and looked more clear than the Trinity River which was turbid and milky.  We were now on the Yurok Reservation.  Here is a unique structure along the old village road in Weitchpec. 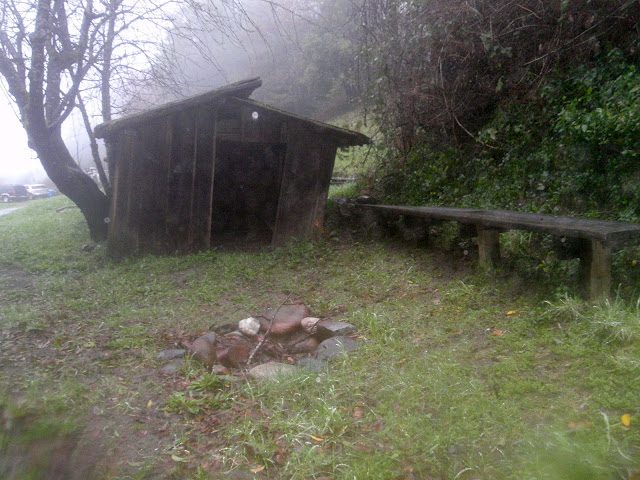 We walked back up the old village road to the Yurok Tribal office where we had parked for the day. 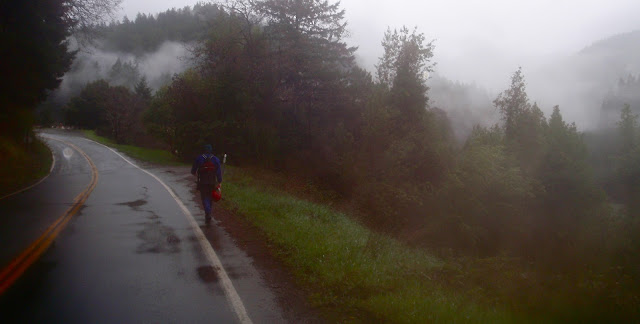 Running our shuttle was fun as we crammed all 5 of us and our gear into Miguel's subaru and loaded an impressive stack upon the racks.  We couldn't go over 45 but didn't mind a bit since we'd had another great day on the river and had easily made the 40 miles from Hawkins Bar to Weitchpec, ticking off another major portion of the Six Rivers Source to Sea Mission.
Posted by Daniel Menten at 11:56 AM