Well, I guess its already a new paddling season.  That summer sure was a short one, and the water seemed to just keep on flowing.  After a brief 5" rainstorm this October, we were blessed with the opportunity to get on Hardscrabble Creek.  This run is extremely difficult to hit at a good level, which is basically, high.  You need a lot of water on the Smith to make this run go.  I recommend 15,000-20,000 at a minimum, and if its dropping quick you may already be out of luck.  The best way to gauge it is visually inspecting the take-out and hoping all the rocks are covered.  It it looks bouncy or scratchy, go elsewhere...that being said, we arrived and it seemed a little bony.  But we were jonesing to go creeking, and it had been raining hard so the hope was for rising levels.  During the shuttle drive to put-in, we encountered monsoon-like conditions, which brightened the mood.

Once on the water, you will be scraping over many sharp rocks in a tiny creek.  Eventually you reach another tributary, and then another, until it suddenly seems like a reasonable flow.  Where the canyon necks in, and a road is visible on the left, get out to scout the first gorge.  By walking down the road on river left you get this view of the steepest part of Hardscrabble Creek.  We were stoked because the flows seemed to be coming up after that downpour on our shuttle drive. 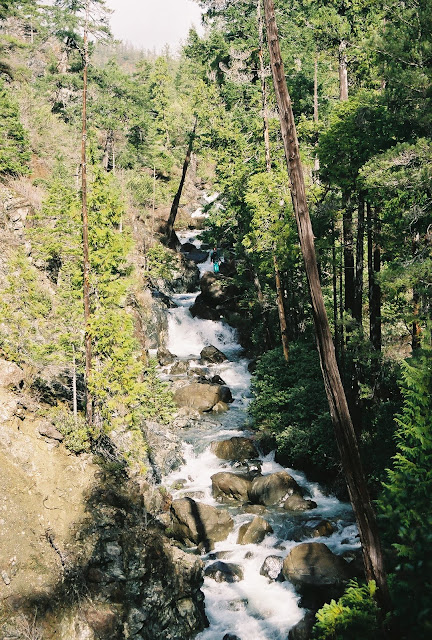 Downstream, another large tributary comes in, and the creek backs off for a little while.  Damon Goodman and Craig Hull enjoying the October creeking. 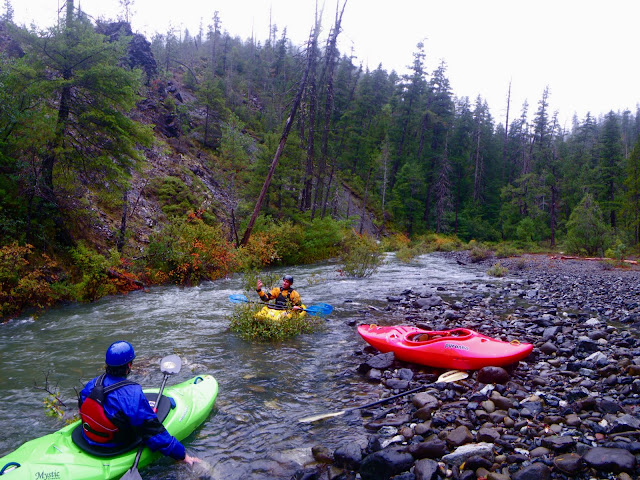 Eventually you reach a long and steep boulder garden rapid where the canyon opens up.  This is followed by a calm pool and horizon line signaling this drop.  Chris Zawacki boofs on an earlier trip. 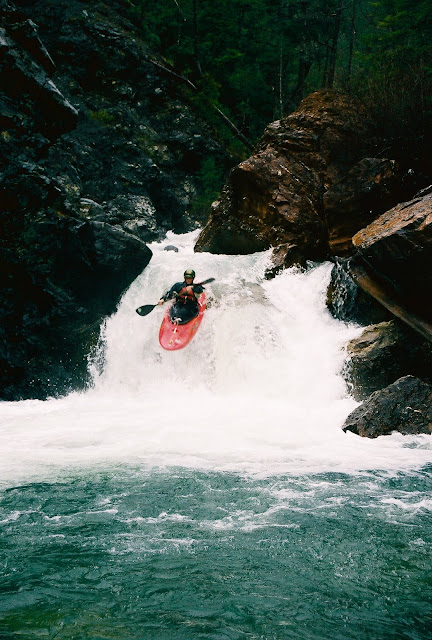 Then it backs off again, for a little while.  As the gradient steepens up again, be prepared to portage Judo-Log Roll, one of the sketchiest logs I've ever seen.  This rapid is named after Alex Wolfgram escaped a sketchy situation, where he was splayed over the log with his leg trapped in his boat which was underneath the log.  Be extra careful to scout this one because the log isn't easy to spot...making it extra dangerous.  Here is a shot of the rapid preceding Judo-Log Roll, in the foreground is the entrance. 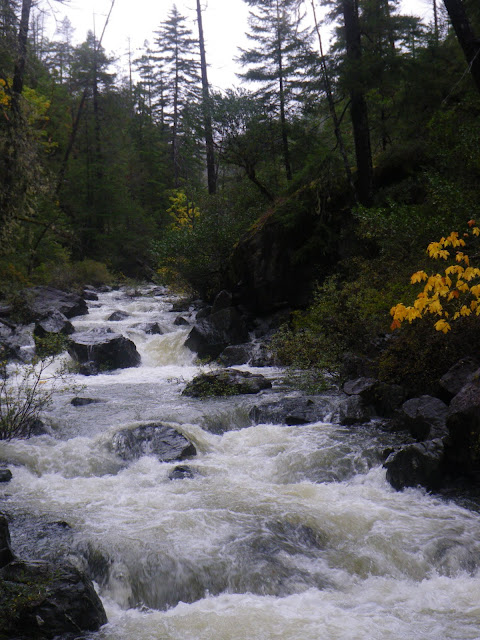 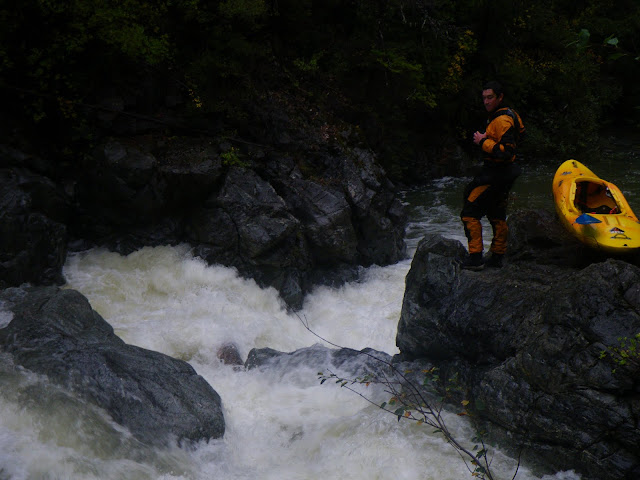 Downstream from here is another heads-up portage where the creek plunges off a falls into a log filled gorge.  This one is hard to spot ahead of time, but comes on a slight right hand bend where a small side channel takes off to the right.  The portage route we've always used requires side-hilling through huckleberries and poison oak on the right.  But the last time we did it, it looked like a river level route exists, which would be wise.  After lowering our boats down a steep hill to this rock precipice, we engaged in the classic bouncing seal-launch.  Here is Damon preparing to drop in. 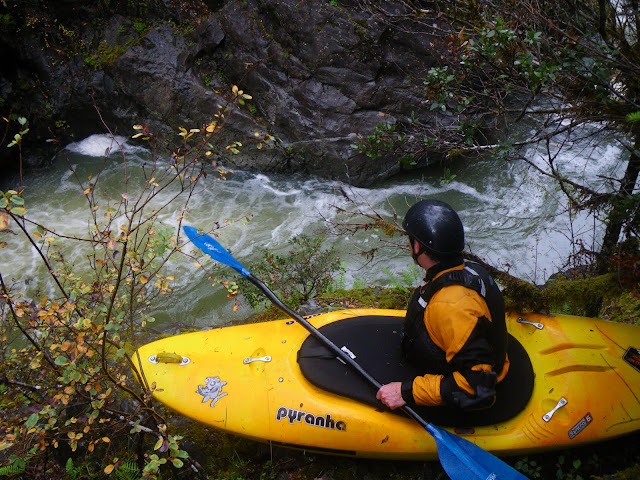 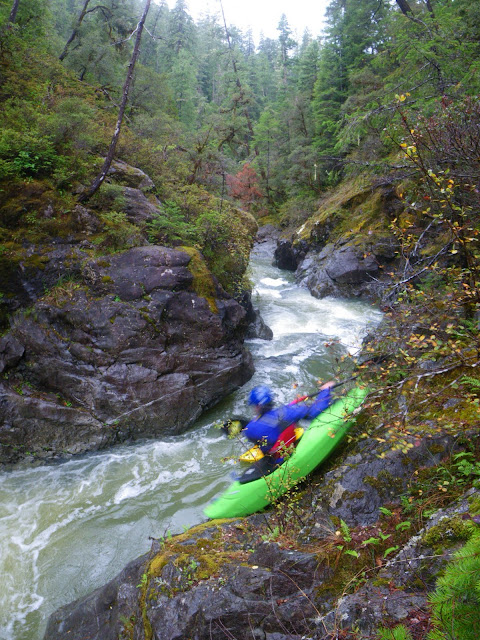 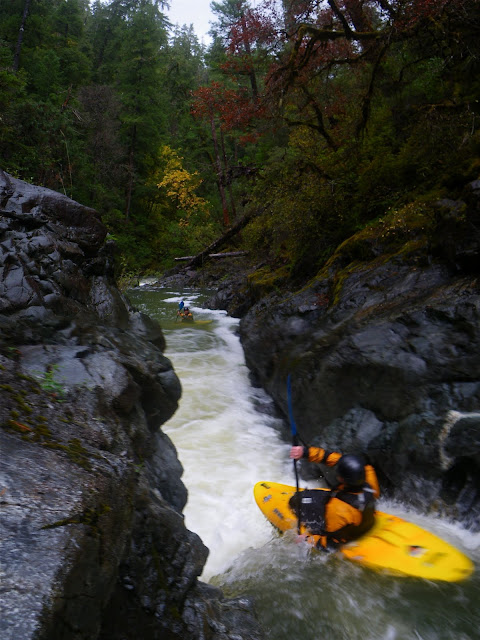 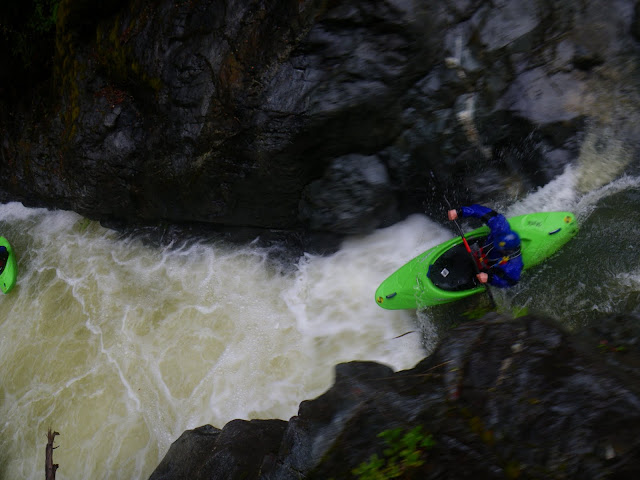 From here, there are still some big boulder-garden rapids with log hazards.  We portaged Billee's Goat, as a log that always backed up a hole seems to have gotten worse.  Towards the end it starts mellowing out.  We were lucky, the last-minute downpour on the shuttle drive gave us just the water we needed, and flows were the low side of good.  We hit the peak of the flow: 19,000 cfs, and it was just enough water.  This creek is a boat-abuser, especially at lower flows.
Posted by Daniel Menten at 1:29 PM 2 comments: Links to this post